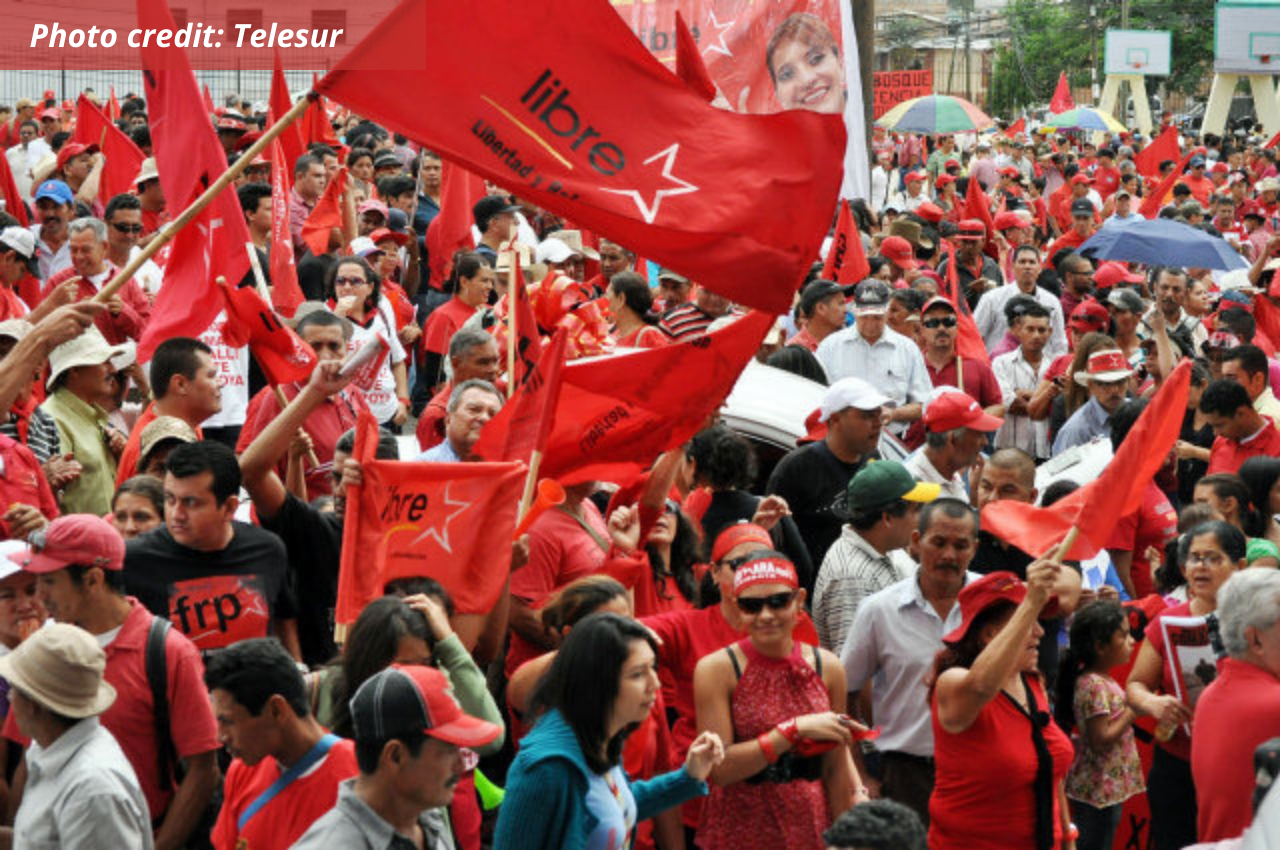 The scene after the 2021 presidential election: There is an air of freedom, and hope for change. The feeling of bonding is everywhere–in the looks, in the smiles, in the dance of the leaves moving to the rhythm of the cold wind this November; it is as if the gates of heaven had been opened before the oppressed people. Shouts of joy fill the streets.

It seems that the nightmare that the Honduran people have lived through for 12 years will finally end, but there are also those who are not shouting for joy, they are cautious and contemplative. Experience tells them otherwise. They know that when you fight against the capitalist, racist and patriarchal criminal hordes, you cannot lower your guard, and that the struggles of women and peoples are struggles go beyond this historical moment, but that this new stage provides a breather, a chance to reflect and act.

The months before the elections: Let’s back up a bit. Tenuous hopes began to arise when the National Electoral Council (CNE) finally agreed to allow the Libertad y Refundación (Liberty and Refoundation) Party to have a representative. The CNE is led by three councilors–one from the National Party, one from the Liberal Party, and one from the LIBRE Party. The regime stymied the process by delaying the approval of the new Electoral Law, which, although not ideal, was a prerequisite for beginning to organize the elections. They also delayed approval of the budget, leaving no time to process the necessary purchases, including the results transmission system (TREP) and the fingerprint readers. The did not want the latter to be accepted because it would serve to reduce the possibilities of fraud, preventing people from voting more than once and also for “the dead” to vote, as in previous elections. This situation caused doubt and anxiety among the population, since it was rumored that the incumbent president, Juan Orlando Hernández, would seek to remain in power. In August, the publicity campaigns launched for everyone running for office.

The women’s and feminist organizations that make up the November 25 Platform held a conversation with the LIBRE Party’s Secretary for Women and presented the Feminist Agenda to the presidential candidate, resulting in a signed pact between the feminists and Xiomara Castro that formally committed her to integrate women’s demands into her government plan. On the same day, the regime and fundamentalist sectors began a hate campaign against women and against the candidate. The campaign was so grotesque that it caused outrage within the population and largely backfired.

The days before the elections: The media allied with the regime bombarded the population with messages of terror and violence, to instill fear so that they wouldn’t turn out to vote, but the population knew that the vote was the best bet to change the situation of profound violence that the country is experiencing. The regime’s policies of imposing the ZEDEs (Special Economic Development Zones), displacing indigenous and rural communities, and creating a legal framework that guarantees impunity to the aggressors, had seriously endangered the population and the little democracy and sovereignty that remained.

Opponents to the regime mounted a counter campaign on social networks, with creative artistic expressions that had a positive impact. Despite the pandemic, despite the threats, despite the context of fear and terror, people arrived at the voting centers with joy and determination. Due to social distancing, the lines were exceedingly long; many had to wait up to 3-4 hours to get to the urns. The participation rate surged to 69%–the highest in Honduran history.

At the polls, the regime was represented by two members of its party, but they also had representatives of the satellite parties or “hinge parties” as they are called in popular jargon, since they do not have followers–their candidates are registered to negotiate the credentials with the highest bidder, in this case the National Party. There was also a large number of national and international observers.

In many polling places, voters stayed on after voting to observe from outside, interesting behavior because with the two previous processes and countless irregularities they doubted the transparency of the process. Vote counting usually begins after 5 pm throughout the country, the official closing time of the polls. Shortly after 8 p.m., the representatives of the CNE (the National Electoral Commission) announced the vote tendency that showed that Xiomara Castro was overwhelmingly winning the presidency.

Then something happened that the opposition warned about before the process–the National Party had instructed its representatives at polling stations to damage the voting closing records, and to leave the polling station. With this, they managed to delay the vote count and keep the population in suspense, and so gain a margin of time to maneuver the results. However, the massive vote for Xiomara left them no room for maneuver.

Having signed a formal pact with Xiomara Castro the winning candidate, and with many feminists in the ranks of the LIBRE Party, women’s organizations hope that another Honduras is possible–one that is fairer, more equitable, and more equal. Reducing gender gaps in the country is the main goal; placing a feminist in front of the institutions responsible for ensuring the comprehensive development of women will be an important stepping stone.

Xiomara is the first female president of Honduras in 66 years of democracy. Many women’s rights activists consider her a close ally. In both the campaign and the new government, she has enlisted many brilliant women, determined to fight the patriarchy.

The “Government Plan for the Refoundation of the Country and the Construction of a Socialist and Democratic State” was drawn up by experienced, young professionals and specialists. Xiomara’s Government Plan was led by the scientist Mary Vallecillos, proudly Honduran, with a strong commitment to social justice.  The plan defines the central task to generate the conditions to create a new social pact through a National Constituent Assembly, focused on unrestricted respect for the human rights of the Honduran people. The plan also includes the political addendum for women and feminists, inspiring hope within the movement to finally reduce gender inequality and inequity in the country.

A new era is beginning. The challenges will be many, because maintaining a broad multi-party coalition is filled with risks, among them, the opportunism of some politicians who renege on the commitments between the parties, a situation that arose with the conflict over the presidency of Congress, and those who do not they want to comply with the pacts that Xiomara has made with grassroots movements. We are also already seeing some politicians who seek to sabotage or outright reject the president’s development plan.

Despite the forces against her, this time the corrupt oligarchy will have a difficult time–the correlation of forces is more balanced. The role of the United States government, which has historically wielded so much influence in the region and in Honduras in particular, will be key in assuring that the dreams of the Honduran people are not denied.  After suffering so much, the people have now shed their fear and dare to dream of a new future.

In July 2021, the City Council of Dumaguete (Negros Oriental, Philippines) approved a motion that…
An interview with Phumi Mtetwa, Regional Director, JASS Southern Africa To mark 21 March, The International Day…
A riddle:  What is more powerful than power?   As the oceans boil, and the hurricanes…