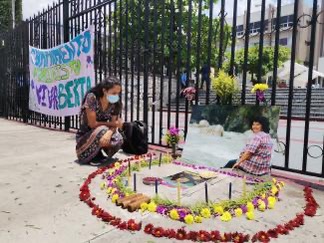 On March 2, 2016, the world suffered the murder of land defender Berta Cáceres. From that moment, those of us who took on the fight for justice pointed out that this act was aimed at stopping the struggle of the Lenca people in defense of the Gualcarque River.

The crime against our mother, Berta, occurred within the context of impunity and violence against land defenders. Early on March 3, 2016, government officials publicly asserted that the murder was a common crime, offering no evidence. But the murderers of Berta Cáceres have names—at the time, they were shareholders in DESA [the company that was building the hydroelectric project she and the Lenca communities opposed]. Today DESA remains only in name, a name stained with blood.

From the point of view of Berta’s friends and family, justice is profound: it is built by the peoples, in the communities, by moving forward in their projects to defend life and the future. It is also built by demanding that the justice institutions do their job.

This construction isn’t easy in any of these spheres. Day after day, the communities face the negative impacts of the companies, the military and the police in the territories. And challenging the institutions of justice means appealing to racist and patriarchal spaces that have never contemplated the worldviews and realities of the communities and their leaders.

The current trial against Roberto David Castillo, who served as general manager of DESA, is being carried out within the justice institutions of the state. After more than two years of delays, the public trial has entered the final phase of oral arguments, where the evidence from both sides is presented and debated. Roberto David Castillo’s direct link to Berta’s murder has been amply demonstrated: recordings of telephone calls made from the cell phones of DESA employees have shown that he coordinated and provided logistics to the hitmen who murdered Berta Cáceres.

In addition, it has been proven that David Castillo transferred and ensured the execution of the orders of the masterminds of the crime to the murderers, that is to say, evidence showed his key role of liaison between those who paid for the murder and those who executed it.

But the role of the businessman was not limited to this. Berta Cáceres warned about Castillo’s training in military intelligence and, as has been seen throughout the hearings, he used this training to control and monitor her actions. In the course of the trial, different evidence has been presented that points directly to the guilt of Roberto David Castillo, but there is also evidence that shows that Castillo’s work, as an attacker of the communities, is framed within the policies of dispossession towards indigenous communities that have been built since colonization and that, in recent times, were reinforced by the 2009 Coup d’état. This assassination takes place within the unequal power relations legitimized by patriarchy, racism and capitalism. The peoples know how to do justice Outside the courtroom, debates about justice also take place. These debates take place mainly in the Feminist Camp “Viva Berta” that was installed on the outskirts of the Supreme Court of Justice. The organizations established themselves declaring that “with this camp, we feminist women, fighters, defenders of life, will make a permanent presence before the judicial process that is being developed in the Supreme Court of Justice to obtain #JusticiaParaBerta and punishment for their intellectual murderers”. This camp, promoted by the National Network of Defenders of Honduras, the Black Fraternal Organization of Honduras (OFRANEH) and the Civic Council of Popular and Indigenous Organizations of Honduras (COPINH), has brought together dozens of women, men, boys and girls who from different expressions of struggle they are building the other justice: the one that the peoples know how to do. When walking through the camp one finds a circle of flowers, which surrounds a tree that at its foot has an image of our Berta, colored candles keep one of the Kids playing at Camp many fires that burn in the camp. The other fire is that of the improvised stoves that cook the food that is distributed three times a day to those who camp. After the talks that take place between bites, each person goes with their plate and cup to the sink and between soapy and bucketful of water, they take advantage of it to update themselves on the news in the camp.