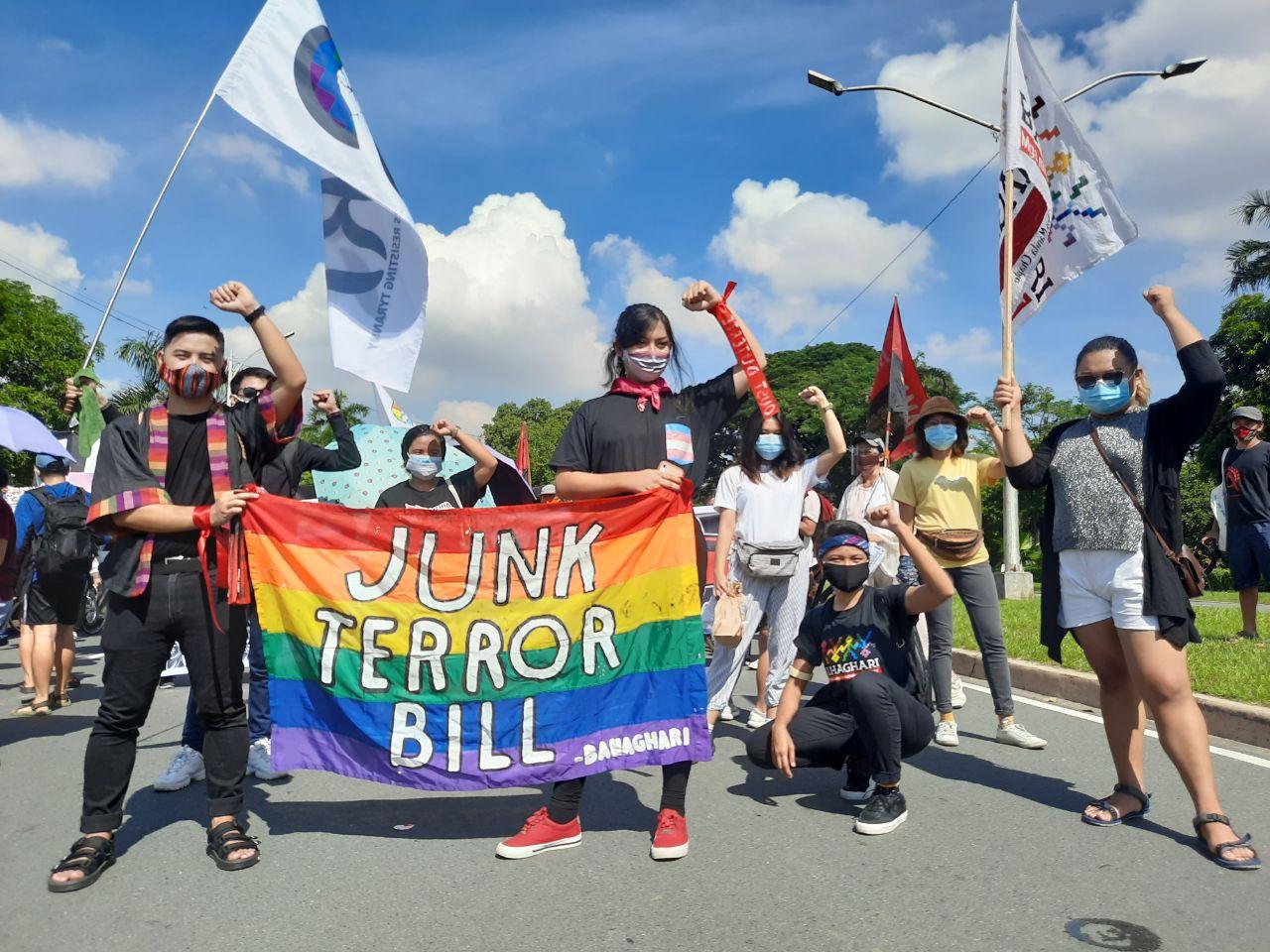 Almost a year ago, 20 members and supporters of the LGBTQ+ community were arrested and detained on 26 June 2020 as they led the Pride March in commemoration of the International Pride Month in Manila, Philippines. Bahaghari Philippines, together with their allies in Salinlahi (an alliance of child rights advocates), Gabriela Women’s Party, and GABRIELA were detained for five days. Holding a protest rally in Mendiola, Manila was a bold move; it was the first time that a group dared to protest near the presidential palace since COVID-19 militarist lockdown restrictions were first imposed in March 2020.

“At its very core, Pride is, and will always be, a protest; Pride means fighting back. And so we marched to Mendiola, demanding the right to health, economic aid, and democracy,” said Carla Nicoyco, chairperson of the LGBTQ+ organization Bahaghari Philippines. Carla was among the 20 detained and charged with resistance and disobedience to authority, illegal assembly, and violation of Republic Act No. 11332, the Law on Reporting of Communicable Diseases.

The Pride 20, as the activists cameto be known, were released five days later but were further investigated, and the charges against them were only dismissed on 26 October 2020. Carla added, “We can say that we were disappointed but not surprised with the violence Pride 20 experienced under the hands of the police. We experienced different forms of torture and treatment for almost five days — from psychological warfare to sexual harassment. We were only given a corner while male and female detainees were kept in separate quarters.”

Shortly after the group’s release, the administration of President Rodrigo Duterte passed the draconian Anti-Terrorism Law, which Carla granted the government “addtional jusitication for attacking its critics — leftists or ordinary people alike.” She added, “I noticed the shift in how the LGBTQ+ community in the country views Pride from something that is celebratory into something of a protest. This is a consequence of the worsening conditions of the LGBTQ+ community.

Bahaghari echoes the call of many justice groups opposing the Anti-Terrorism Law, which contains broad provisions that criminalize many forms of ordinary dissent. Bahaghari has also criticized the Philippine government for its militarized response to the pandemic and an absence of aid and support to its people.

It was inspiring to see the overwhelming support extended by many groups and individuals, objecting to the detention of the Pride protesters, which, according to Carla, was an important factor in their release. One of the first organizations to support Pride 20 was JASS.

A day after the arrest of the Pride 20, JASS mobilized 50 local, regional, and international organizations to sign a global solidarity statement calling for the release of the Pride 20. “The global unity statement and the swift support from JASS not only provided help with our immediate needs, but it also gave us political and moral support. The messages and actions by JASS’ broader network of allies and partners were critical” said Carla. “We would not have survived if it were not for different organizations and individuals here and abroad who gave material and moral support,” Carla added. As the Pride 20 were locked up in cramped quarters with nothing to sleep on but the cold floors, JASS provided them with bedding. Upon their release, JASS also supported their healthcare needs including COVID-19 testing while in 14-day quarantine through the JASS Mobilization Fund. JASS also facilitated connections and gave recommendations to several protection organizations for their legal defense and other needs.

After their release, the Pride 20 protesters filed a counter-charge against the police for unlawful arrest, physical injuries, and maltreatment. When the lockdown policies eased in Metro Manila, Carla and the rest of the Bahaghari continued their organizing with urban poor communities: “When the government eased  travel restrictions during lockdown, we were able to go back to the communities. With the funds from JASS, we were able to reach out and organize. The intensified attacks on activists and peasant rights organizers is fueling anger. But we are harnessing that anger and transforming it into energy.” Since then, Bahaghari established new chapters in several provinces in the country. Bahaghari’s social media pages garnered thousands of likes and followers in just a span of a few months, and it plans to continue to build the momentum through sustained online and offline mobilizing and organizing.

Recently, Bahaghari led protest actions following the killing of transgender man Ebeng Mayor. Ebeng was mutilated, raped, and murdered. His body was discovered last month. “It is a clear example of a hate crime,” said Carla. “We condemn this murder. We seek justice for Ebeng. We call for the arrest and imprisonment of the perpetrators.” She also called on the Philippine Congress to certify the SOGIE (Sexual Orientation, Gender Identity and Expression) Equality Bill. LGBTQ+ people are vulnerable to violence, especially hate crimes. “It has been 21 years since the SOGIE Equality Bill was re-filed in Congress. It remains unpassed. It is as old as Ebeng who was 21 years old,” said Carla.

Bahaghari will once again lead the Pride protest this month. They are expecting thousands of LGBTQ+ and supporters to come out to join the demonstrations against the Duterte government’s authoritarianism and criminal negligence. Carla concluded with a rousing message addressed to the LGBTQ+ community: “Us queers have lived our days in hiding and fear. We’re living in a world that does not want us to exist. Like other oppressed sectors of society, we’ve experienced abuse, injustice, and violence first hand. We’ve been handed our sorry lot by the world when we know there’s a better one. But we’re here. We persist against all odds. Our existence is resistance.”