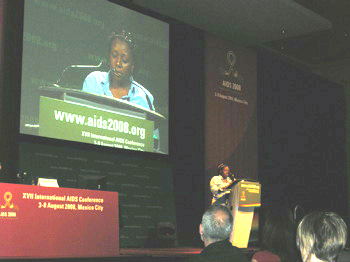 Tuesday at the IAC was an action packed day for me. I got to speak in front of a lot of people which was a new experience for me and it definitely made me feel more empowered. Before I got on stage I was telling myself that I cant do this, but at the same time I told myself this is the an opportunity for me to tell my story. Having the women from Jass there helped me a lot because they encouraged me and told me I could do it. As I sat on the panel I scribbled a lot of things I would want to say but when I was eventually introduced and had to speak I totally forgot it all and just spoke from my heart. Issues of violence affect me deeply as I have also had personal experiences of violence and its also common in the environment I currently live in. After I was done and the comments were now being made, I felt great about myself and that there were people who were in solidarity with me and the work I do.

I appreciate being a part of the Jass process as it has given me the opportunity to share with a lot of great women issues that affect all of us. After the session I met up with so many different people who are currently working on such issues. I was then invited to speak at another meeting talking about the invisibility of WSW within the HIV/AIDS movement and the women’s movement in general. It was a great place for me to share with others around the world on this issues and it was more relaxing now because it was not in front of such a big crowd so I was not as nervous as I was the first time. After that talk I then rushed over to the Cross Regional Dialogue. This was also an eye opening event for me as I got to listen to women’s different experiences in Mexico, Spain and Africa. You get to realize that the group was so dynamic and the experiences shared are so different. As I listened to some of the women talking about legalizing abortion, I looked at the context where I was coming from and realized that we still have a long way to go as issues the legality of abortion were not even on our agendas yet. This was a great learning experience foe me especially talking about the strategies they used and appreciated the work that they were doing currently.

As we go into our final days in Mexico I am looking forward to being a part of a larger process especially having met other women from a different part of the world. I hope that the process will continue and we will share with each other regularly on the work we are doing and we would like to do collectively as Jass. By the way I am Patience Mandishona from GALZ.My final words are lets Keep Crossing the Line…. 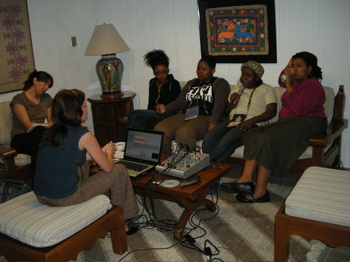