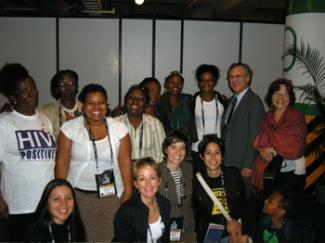 Mexico City: August 7th, our last day together, was another action-packed 10 hours of motion as we tried to make the most of the conference and being together. A discussion about the complex world of microfinance led by Malena and Adriana — how to navigate a world dominated by financial interests to get resources to enable women to feed their families and have time to organize and act politically? A discussion with Helena Hofbauer, Mexican budget wiz and feminist, to explore how women can track public money for healthcare, treatment, prevention, income generation, etc. Wandering about in the loud chaos of the global village, the hectic grand hallways of the official meeting; and our final panel: Political Crises, Sexual Violence and HIV/AIDS, with our Martha Tholanah speaking powerfully about violence as part of the post-election chaos followed by Paula Donovan’s (from AIDS FREE WORLD (a campaign co-founded with Stephen Lewis) explicit expose of the ferocious violence against women in the Congo, and the United Nation’s half-baked and incomplete responses. Raced back in dense, endless, rainy traffic in time, collectively numbed and silenced by the cumulative impact of the conference and the horro of the final presentation, for a quick debrief in the middle of the hotel lobby. One after another, our final thoughts began with “exhausted” or “troubled” but mixed with an impossible volume of new information and perspectives to sift through. Mixed with a sense of pride and power at having been present and vocal amongst the experts, the salesmen, the managers and the policymakers. Martha said “We’ve been learning together in the context of workshops and now we faced power. It’s different and much more.”

The glaring contradictions of the conference are disorienting, troubling, enraging, intimidating — from the fact that the “global village” full of “activists” is in the middle of a horse race track, and the first booth you see when you enter on one side is Glaxosmithkline Pharmaceuticals, placed alongside booths about people’s empowerment to blur the power differences and conflict of interests in this fight. The creative resistance of lesbian activists, transgender groups, unionists, indigenous people, HIV+women, men and children reduced to a series of booths and shows on a stage. Alejandra added her disgust at how all things mexican had been reduced to decorations and stuff to sell. We couldn’t help but feel that the gains of painful, past struggles for a voice at the table had been coopted and manipulated to legitimize the continued dominance of corporate, international aid and non-profit interests in the scramble for money that fail to reach or respond to those who need it in the fight against AIDS — and most importantly for us, women. All this, and we still feel hopeful. Energized by the three women amonst us who spoke on panels, by the excitement of t-shirts WOMEN CROSSING THE LINE generated. By the clear recognition that gender equality and gender violence have made their way into the “experts” parlance and policymakers mouths. Huge victories for many who’ve fought this fight many years. So, for us, putting words into action and resources into women’s hands is where we have to direct the power of our numbers and continue to cross the line for women’s lives and rights. We met a lot of extraordinary people and feel privileged to be in Mexico city. Next stop, Cape Town, November.

One other moment that thrilled me during our time here — aside from our digital stories workshop and Patience and Martha’s presentations — was our crossregional dialogue between African, Mesoamerican, European and North American women — an open conversation about our context, political aims and possible ways and reasons to organize our collective power. And with radio feminista broadcasting live with virtual participation from our feminist friends in Costa Rica. Old fashioned political dialogue — the essence of building collective power among women — multiplied and documented on the information highway by technology. How cool is that!?