I’m sharing this space with my friend and sister activist, Sindi Blose, from Treatment Action Campaign in South Africa. She won’t mention the fact that she did an extraordinary job of rocking the Global Village this afternoon with the rest of our women crossing the line. The songs and dancing drew dozens of men and women to our cramped site with huge enthusiasm and nothing but joy and appreciation for the power of their very personal stories of struggle. 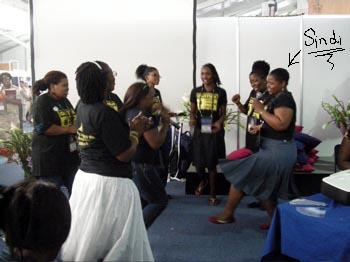 Hi everybody, I’m Sindi in Mexico having the time of my life so far. Today I attended the session on women and girls with a speech by Stephen Lewis. I was happy to finally be in the same room with him. We need many male leadership in Africa to view women as he does the world would be such a safer space for women to realize their full potential because there would be no discrimination against women on so many issues and platforms.

I’m part of a group of eight women from Southern Africa who planned a session on us being African women telling our own stories at the Women’s Networking Zone in the Global Village today. When we got to the women’s networking zone I was disappointed by the fact that we were 80% of our audience and there was a loud musical band distracting us so I thought that we won’t be able to share our digital stories with anyone what a waste of time. we decided to sing African songs really loud, that speak about power and unity to fight against injustice on women. Then people started coming in numbers to hear what we have to say. 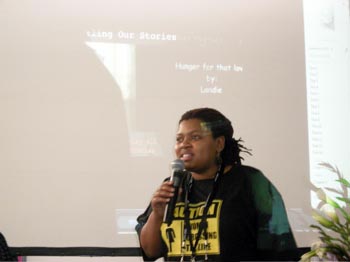 There are about 13 digital stories but we decided to only present three. First by Patience from Zimbabwe how she views her self as a women who is lesbian and how society discriminates and marginalizes her, second by Esther from Namibia her story about how she was robbed of her motherhood by her government health department when they decided to sterilize her without consent because she is HIV positive. Third story by Wala and post-natal depression how the public health system in her country fail women like her who suffer from post-natal depression
At least 70 people listened to our stories and felt the world is failing African women every single day, but most people were happy there we were there to tell our own stories in our own way.

The experience was empowering for me. It was my first time facilitating at an international AIDS conference. I am more than ready now to attend the rest of the conference and engage critically on issues relating to women especially in Africa. 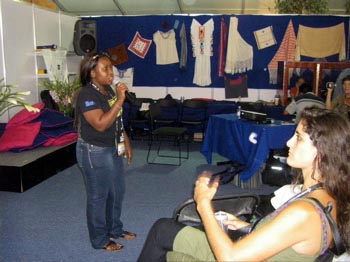 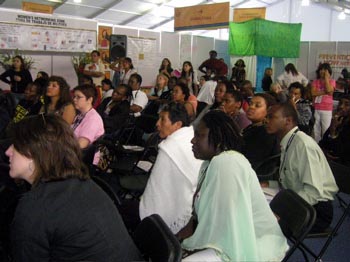 Lisa again: the most powerful responses to Sindi and the other women came from a Mexican transgender who told me “i can feel the power with these women. I only want to sit here and listen to them all day.”   Two African men committed their solidarity — saying that they would do whatever they could to fight “this oppression of their African sisters.”

In closing, the official inauguration at the National Auditorium in downtown Mexico City. An all star cast included the President of Mexico, the UN Secretary General, the VP of Spain and 4 other important and powerful AIDS leaders, yet it was an HIV+ 13 year old girl from Honduras who’s shaking voice and personal plea stole the show and had the place cheering with a standing ovation. Honorable mention goes to the amazing mariachi band and the gorgeous and talented Folkloric Ballet. 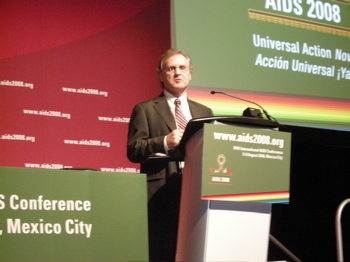 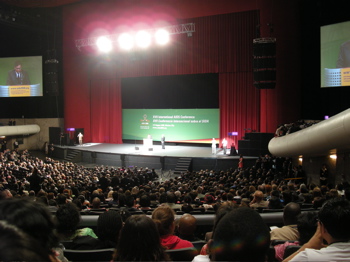