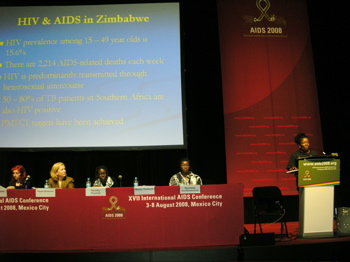 The AIDS conference ended today. It has been an eventful week. I did not get to contribute to JASS blog as I tried to cram in as much of conference program as possible. There has been too much of interest to me, and this has left me without much breathing space. I got to network, socialize, and I love that. On Tuesday I presented on the Zimbabwean experience of civil society working on treatment monitoring and advocacy, in particular our contribution to “Missing the Target”. I missed a session I had intended to attend (yesterday) after coming across some people, like my namesake Martha who lives in the UK, and got into our own discussion about strategies on how we can boost health access issues in our small way for our country. We plan to continue with the plan and mobilize all those Zimbabwean healthcare professionals who are working in the UK.

Yesterday, I made my political presentation, titled “Ongoing Political Crises in Zimbabwe, Sexual Violence and HIV. It was difficult having to present from power point, as the effects of the politically motivated violence is a very emotional issue, and mostly I prefer to speak from my heart. Power point seems to disrupt and dilute my way of expression. Maybe I subconsciously had to sanitize the presentation because of fear of repercussions. It was scary doing that kind of presentation!! At the end of the day, I found myself trying to get to a reception I had been invited. Stupidly, I had not asked of details, and only understood it to be a reception for people who are involved in clinical trials. We got off the bus with Allegra at the Marriott Hotel, after braving almost two hours of the horrible Mexico City traffic, and rain was pouring down. The reception, to my horror, was hosted by Boeringer Ingelheim – big pharmaceutical company. I don’t like playing with big pharma, even if my life is dependent on them now since this is my sixth year on ARVs. However, the traffic and hunger by the time I got there ensured that I was on my best behaviour.

I was happy to hear Justice Edwin Cameron and Zonny Woods make their very inspiring and refreshing addresses in the final plenary this morning. Then we had the rapporteur session today to wrap up the conference. Points from my presentation were quoted! The rapporteur presentations by the youth, community, and policy and political sciences were the most human and addressed our issues. I went to get my certificate of attendance from the “Global Ghetto” while waiting for the closing ceremony to begin. The closing ceremony took longer than usual, as a few groups disrupted with their protests. The panel had no black African, but it was refreshing to see a young black woman “invade” the podium to deliver demand for housing for PLWHA. 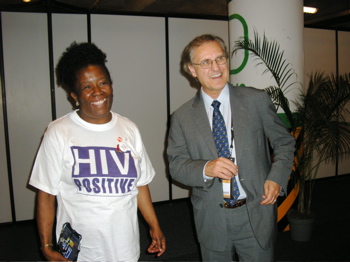 The end of the ceremony was another chance to network and socialize, and I deliberately sought out Zimbabweans I had never met before. One Shona Catholic nun shocked me when she complained and wondered who was revealing the violence against women in Zimbabwe in an international forum like this one. She was referring to the reference made to issues coming out of my presentation that were quoted in the rapporteur session. One woman commented that someone had to start speaking for those who could not speak for themselves. The nun complained about the conference entertaining issues of sex workers and LGBTI. I was too shocked and walked away. The Catholic Church is one that I looked up to, especially with respect to the Catholic Commission for Justice and Peace (CCJP), which has always been at the forefront of letting the world know about human rights abuses in Zimbabwe, particularly during the time when there were many killings in Matabeleland by the army.

This shows we still have a lot of work to do, and particularly crossing the line as women.