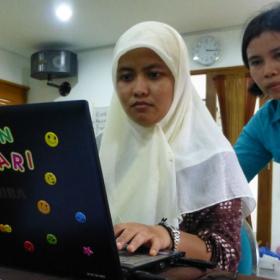 “No, I can’t write about myself! What should I write? I am embarrassed!” cried Swita, a 24-year-old activist. Swita works at Yayasan Harapan Ibu (Mother’s Hope Foundation) and organizes women sex workers in Jayapura, Papua Province in Indonesia.

Her work requires her to go from one night club to another to meet her community. When Forum Aktivisi Perempuan Muda (FAMM-Indonesia) or Young Indonesian Women Activists’ Forum opened a call for applications for its second writing workshop or write-shop, Swita immediately sent her writings. Swita wrote about her experience on accompanying a woman sex worker who was diagnosed as HIV-positive. “The sex worker,” she wrote, “is a widow with one child. When her pimp found out about her status as a single mother she was fired from her work at the night club. Like many of the sex workers in Papua, she is a Muslim who comes from another province. She was eventually sent home.” Swita accompanied her through this bitter journey.

Swita was able to tell another woman’s story. However, in this write-shop, we asked the participants to write about themselves.

Sounds easy? Not at all.

Swita was not the only one who was surprised by this workshop process. Olvy, a 28-year-old participant who works with indigenous people’s issues, was also shocked. She didn’t know what to write about herself or her work. As it turned out, writing about a story from one’s own point of view is not something that comes natural for these young women. For them, it’s a strange thought. They questioned the idea. Who would read a story about me? I have nothing important to be written. Why write about myself? It’s too sensitive a topic and I don’t want people to read it.

They were very emotional. Some participants who were used to writing stories find the idea amusing and they were also a bit reluctant.

I myself was not eager to write. Like my friends, I am also torn between choosing which part of my life is worth telling. I wasn’t planning on writing and I used my position as part of the organizing committee as an excuse that I was too busy to write. However,  the atmosphere and emotion during the write-shop got me carried away. Ali Mumuk, the facilitator, encouraged me to write. He said, “Niken, you’re the only one aside from Dina Lumbantobing and Nani Zulminarni who can tell the whole process within FAMM-Indonesia since 2008. You organized these women into workshops, you were able to monitor their development, you know them personally, and you know part of their stories. You may have been sending monthly reports to JASS, but I am sure there are many things you haven’t shared to them that left deep impressions on you.”

He continued, “There are many people who don’t know what you are doing in FAMM. Why organizing, why capacity building, why leadership, why these women? I am sure you can tell me verbally about the changes in every Indonesia alumna. This time, you will write about them.” I finally wrote about my experience as part of the JASS team.

I thought, “Oh my God, there are a lot of things to write!” But Mumuk was right. I know many of these women personally. They are constantly changing – from the first time I met them until the present. I, too, have changed.

Renowned Indonesian writer Pramoedya Ananta Toer once said, “One may be very clever, but as long as she does not write, she would be lost in society and in history. Writing is work for eternity.” Sure, it is easy for him to say that. He wrote thick history novels translated into many languages.

Mumuk noticed the desperation of the participants. They will not write until they realize the importance of their writing. They are part of her-story. “You and your story are important,” Mumuk kept saying to them. “Write your anger, your disappointment, your happiness, your changes after the movement building institutes (MBIs) of JASS, your moment of truth, and your ‘becoming’ process as a leader.” Eyes were rolling and faces turned to each other. As the organizer of the write-shop, I was worried about how things will turn out. 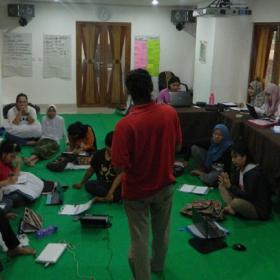 On the first session, we had a reflection on leadership which was facilitated by Maria Mustika and Hasmida Karim. Despite the movement building institute or MBI process we all had, leadership is still a big “L” word that we as women are slow to identify with. The participants once again ‘fought their way’ to counter the mainstream concept of leadership. I have no doubt that we all have leadership character on the making but oftentimes, we don’t realize it. As women, we often undermine our achievements and our way of knowing. In many religious texts – the leader in the household, religion, and state – is a man or a group of men. Women were praised for their ‘good virtues’ and their obedient attitude. In the write-shop, we did the opposite: we navigated the “L” word in our personal and professional lives.

During most of the write-shop, Mumuk gave the participants games to practice their writing skills. He said, “They have rich organizing experience but lack self confidence in writing it. There is a ‘psychological’ barrier they must deal with to be able to write.”

The participants were given enough time to write individually. I overheard some of them complain that they need more time to write. However, all of them finished their writing according to the deadline we agreed on.

I have mixed feelings upon seeing the participants work hard to write their stories. Some of them shed tears, some were in deep concentration, and some meditated in the corner.

Asih, a 29-year-old participant who works with students in pesantren (Islamic boarding schools) said she has no problem in writing her own story because it’s about writing her own life. She was impressed with the facilitating process that she plans to hold a similar write-shop in her community and her organization. “It is simple and I am confident I can facilitate it in my own group.” The other participants expressed this similar intention.

Mittya or Tya, a 23-year-old participant said that one of the things she learned from the write-shop is that one cannot live her life in anger. She is working at the Women Crisis Center as a counselor. She wrote about her experience working in an environment that supports survivors of domestic violence.

Cung, a 29-year-old who organizes lesbian communities, feels that the write-shop is empowering. She wrote about her upbringing in pesantren where she must wear a veil and was told that homosexuality is a great sin. In the first MBI, she was a restless soul. She is a changed person now. She’s emotionally much better and it affects her work positively.

The tears, anger, and blank stares turned into pieces of writing. It was a therapy for all of us. In the end we were relieved that we manage to find the “power within” and to appreciate our work as leaders and activists much better. 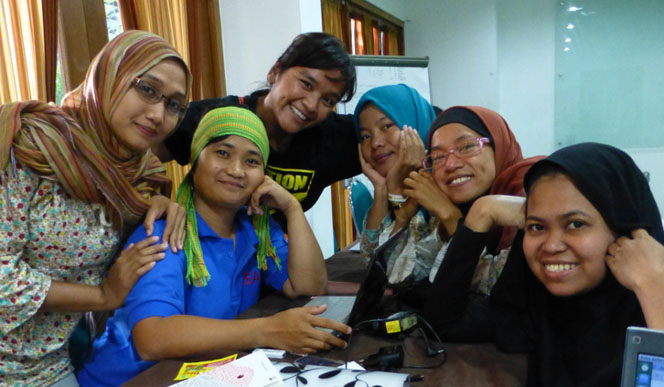