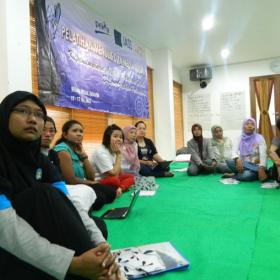 “Are writers born or made?”

FAMM-Indonesia believes that the ability to document ideas and experiences in written form is one of the strengths in promoting women’s “herstory” and the advancement of the women’s and social movements. In Indonesia, JASS’ holistic strategies that empower women and retool and activate women’s movements are very much striking. JASS has been equipping activist leaders from all walks of life with the confidence and skills that they need since it began in Southeast Asia in 2007.

In 2010, FAMM-Indonesia held their first write-shop involving movement building institute (MBI) alumnae. The stories produced in this write-shop were compiled into a book anthology entitled “PRISM: JASS Young Women Activists’ Reflections on Community Organizing”. There were 18 women who contributed their writings around grassroots community organizing.

On 12-17 May 2013, FAMM-Indonesia held their second workshop at the Wisma Hijau, Jakarta, Indonesia where a total of 15 participants from four FAMM-Indonesia regions – Sumatra, Java-Bali-Lombok, Kalimantan and Sulmantap – took part.

Generally, this workshop was intended as a space for JASS movement-building institute (MBI) alumnae, who are all FAMM-Indonesia members, to reflect their understanding about the meaning of leadership on a personal and organizational level as well as building their capacity to use social media tools to support their advocacy and campaign activities,” says Niken Lestari, FAMM-Indonesia’s National Coordinator.

In particular, the write-shop had planned to prepare print-ready manuscript for FAMM-Indonesia’s second book with the theme “Young Women Activists’ Leadership in the Women’s Movement”. It also targeted to improve the writing skills of FAMM members so that they can be depended on as contributors for FAMM’s blog and website. The participants were also expected to document and compile lessons learned about community organizing. At the same time, they were set to choose and combine appropriate social media tools to support grassroots women’s campaigns.

The write-shop held discussions on the meaning and importance of leadership, the concept and potentials of building a group of cadres (or core groups of political activists). It also opened safe spaces where women were free to talk about their concerns, among others.

No time was wasted as the evening writing sessions served as a space to spur women’s writing further. In the initial stages of the writing, some participants were diffident, uncomfortable and were even scared to write down their experience but write-shop facilitator Ali Mumuk from TandaBaca Foundation, gave a lot of motivation for participants to overcome their “personal” stumbling blocks and to start writing from the heart.

I was not sure what to write about myself. After I wrote, I realized there were many things that I have accomplished. I’m not a greenhorn that my senior organization used to say to me,” says Olvy Oktaviani, a young community organizer.

The Use of Social Media and ICT

In the ICT training session, the participants were taught the use of social media to support their activities in the communities and their organizations. Almost all of the participants have Facebook accounts and some even have blogs where they can publish their writings. Kamilia Manaf and Nisa from Erotics Indonesia facilitated this session.

There was night session held which served as an interactive discussion to commemorate the International Day against Homophobia (IDAHO). Discussion began with a critical awareness of the importance of internet safety and promote anti cyber-bullying awareness that LGBTs and social activists need.

This workshop was like a wake-up call for me. It shook my spirit that was otherwise buried by routine activities. It also ‘dismantled’ my trauma. Through reflections, I became aware which trauma that I have survived and which ones I have not,” says Maria Mustika of FAMM-Indonesia, who is also an LGBT rights activist. 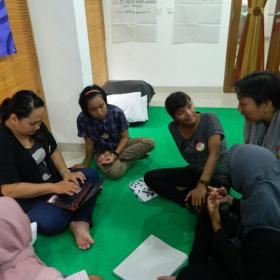 True to JASS’ vision, FAMM-Indonesia is maximizing women’s creative use of social media to amplify the visibility, appeal and reach of women’s rights agendas and the role of women’s movements in advancing democracy and justice. It is also producing and publishing knowledge from practice – to contribute to improved responses to inequality and women’s rights challenges.

The FAMM members and workshop participants are working on a range of issues in their communities: women migrants’ and child workers’ rights, reproductive health for adolescent communities, public service and capacity building, LGBT rights, HIV/ AIDS education and sex workers, community organizing and micro credit finance, rural women and indigenous people’s organizing, organic farming, violence against women and children and counselling for women and girls victims. These issues are the same themes that FAMM women can use to advance women’s agenda in the communities forward.

Anyone can write, including the community-based women whom I am organizing. I feel so positive about this realization,” concludes Siti Harsun, a rural community organizer.

For the women of FAMM-Indonesia, the write-shop made them learn the basic tenets of writing for and about women– it should be from the heart, with women’s lens, and with grassroots women’s interests at the fore.