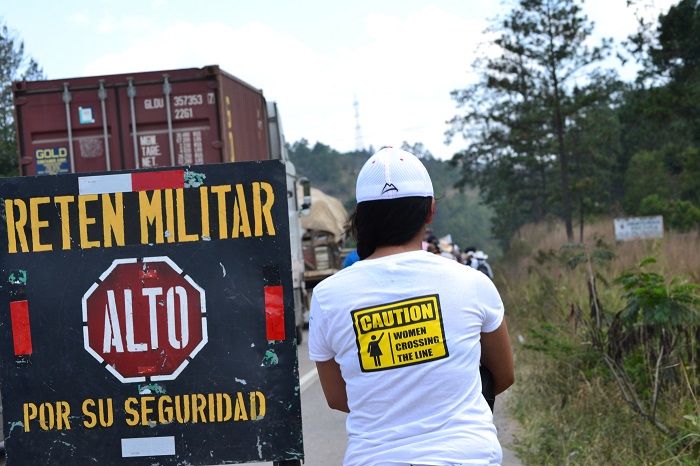 “Asylum was never meant to alleviate all problems — even all serious problems — that people face every day all over the world.” This is what U.S. Attorney General Jeff Sessions said in June when he overturned precedent that had granted asylum to migrants fleeing domestic violence. It made me think about one of the women I met when I was working at a refugee resettlement agency. She had fled El Salvador, one of the world’s most dangerous countries for women, to escape a husband who had sexually and physically abused her for years. After an arduous journey to the U.S. in which she suffered violence and extortion, she now awaits an asylum hearing. I thought how now, following the Department of Justice’s new guidelines, a system that should have offered her protection has instead turned its back.

Her story is not unique. Thousands of women flee indescribable violence and hardship. Right now, the U.S. is offering them hostility instead of safety, refusing to accept accountability for a crisis it was instrumental in creating. From the 1954 overthrow of Guatemala’s democratically elected government to supporting the re-election of the Honduran president in 2017 in spite of massive electoral irregularities to the War on Drugs, the American government’s actions – past and present – are inextricably linked to the epidemic of violence and instability in many Central and Latin American countries.

This reality is compounded by gender. The UN considers Latin America and the Caribbean the world’s most violent region for women. Widespread gender-based violence is fueled by hyper-masculinity – the idea that physical strength and aggression are what it takes to be a man – and organized crime. In Central America, two out of every three women who are murdered are targeted because of their gender. Central American and Mexican women who migrate report that they cannot rely on authorities and public services to protect them. A UNHCR study found that of 160 women they interviewed in U.S. detention, 40% never reported a crime at all and the 60% who did received little help. Sometimes the police themselves are the perpetrators.

The danger of violence does not disappear after women leave their home countries. In fact, some studies have found that up to 80% of female migrants experience rape and sexual assault during migration. I recall my interviews with mostly young girls who cited harrowing violence as they made it across the border: beatings, threats, forced miscarriages. For some migrants, gender-based violence continues even in detention. Between 2010 and 2016, 30,000 complaints were filed with Department of Homeland Security listing a wide range of abuses while in immigration custody.

It is extraordinarily difficult to meet strict U.S. asylum law requirements, and denial rates for the Northern Triangle Countries and Mexico are among the highest. When women are deported, they tend to struggle with reintegration. First, they must live in fear that their former abusers will find them. If they lack the means to relocate to a different town, they risk re-victimization. Mothers who left their children in their home countries as they tried to seek asylum face stigma, and other mothers are deported with their kids left in detention in the U.S. These women often experience a devastating psychosocial impact from returning to their children empty-handed or returning without them at all.

While this reality is grim, women throughout the region are fighting back. As early as 2015, a wave of demonstrations echoed throughout the region, as feminists united behind #NiUnaMenos (Not One Woman Less). Their demands are basic: to live their lives free from violence, and to take back their sexual, labor, and citizen rights as women. More and more women have become vocal about their sexuality, and are educating others to do the same. In a region that is historically conservative and considers sex and sexuality taboo, this simple action is revolutionary. More women are embracing these topics because they are seen as directly related to how society views women and their place in decision-making spaces. Women are organizing against injustices affecting their daily lives: forced disappearances, justice for missing or murdered family members, femicide, corruption, land defense, gang violence, and everyday stories of harassment (#Cuéntalo). Women are organizing because they refuse to be spectators. They know they cannot rely on the government or security forces, and as a result, they have taken matters in their own hands. Women across the region are building their own networks, demanding change and accountability. Due to women’s activism, things are slowly changing, but gender-based violence persists.

This much is clear for now: With ongoing violence, the current migration crisis is not disappearing, and more women will continue to flee to and be rejected by the U.S. in search of safety. Once professing itself a beacon of hope for people seeking refuge, the U.S. can no longer claim that title after Sessions’ announcement to stop offering protection to women escaping domestic violence. Central American governments need to listen too. They need to start believing women and invest in their safety. They must also take a stand against gender-based violence by establishing proper protection mechanisms. They have to engage with activists in exhaustive conversations related to gender to change cultural attitudes towards women. They need to punish the perpetrators of this violence. Until this happens, men will continue to kill women with near impunity on a daily basis. Central America and Mexico – and the United States too – have become places in which too many women’s lives don’t matter. It’s time for a change.