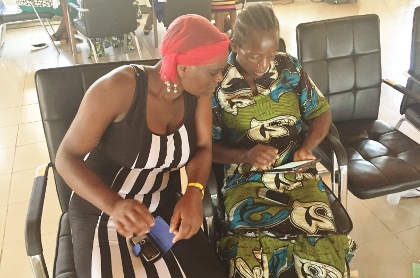 “I now know how to use a tablet which is not a norm in Malawi because [many believe] tablets cannot and should not be used by a local woman like me,” says woman activist leader Jessie Mwale of Mzimba, Malawi. “But because [of this skill I am empowered and I have knowledge.”

Mobile phones in the hands of women activist leaders can be powerful tools to drive movements and campaigns. Because mobile phones are a personal part of our daily lives, they have the potential to reach and impact thousands more people.

In Malawi, women’s organizing through the Our Bodies, Our Lives Campaign for Better ARVs has brought many powerful changes for women and opportunities for women to take the lead in their communities. Over the last year, the Our Bodies, Our Lives Campaign, supported by JASS Southern Africa and a network of partners, established campaign committees in all 28 districts in Malawi to monitor the rollout of the new HIV drug regimen and document other barriers to positive people’s access to treatment and adequate healthcare, such as health worker attitudes or stock outs of essential medicines.  However, there are still many challenges for women across the country and barriers that prevent us from participating fully when it comes to political life, livelihoods and more.

ICTs (information and communications technologies) present a lot of new possibilities for women to become involved. Women activist leaders in the Our Bodies, Our Lives Campaign are using ICTs to open up ‘virtual’ spaces for dialogue and information-sharing so that a woman who lives in Rumphi in northern Malawi can learn from a woman based in the more central capital city Lilongwe within minutes.

“My cell phone is the only way for me to communicate with people in my organization and in other networks. It is important for my work. Someone may be stuck somewhere and need my help. Because I have my cell phone with me, they can call me and I can help them as an activist. Also, someone can send a message to tell me to check email to find and print a document they have sent me. (The printer and laptop are not mine but the cell phone is). In the past it was difficult for me to access emails – I could go for two weeks or even more without using the internet. But on my new phone I can look up information on the internet and share it. I can go on Facebook. I can even get the news. Of course, I have to buy airtime to pay for using the internet. A cell phone doesn’t store much information, not as much as a laptop. A cell phone is easy to for someone to steal. But, still, it is very useful to have one.” Tiwonge Gondwe, Woman Activist Leader, Northern Malawi (ICT Toolkit for Feminist Movement Building, 2015 p12) 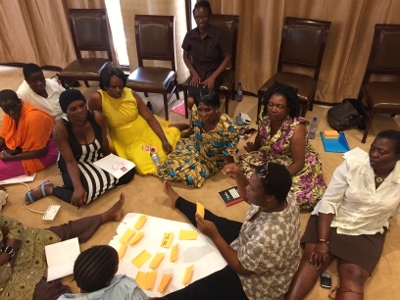 Launched in 2012 as part of a long-term movement building initiative led by HIV-positive women activist leaders, the Our Bodies, Our Lives Campaign is committed to fighting for better lives, healthcare and wellbeing for positive women across Malawi. In March 2016, women activists launched a participatory action research (PAR) Monitoring, Evaluation and Learning (MEL) process with computer tablets that will help women to build evidence to fuel local to international advocacy agendas. Using a data management system called KOBO, the 30 MEL point people across Malawi are gathering data on healthcare in their communities, how difficult it is to access it and the quality of care as well as drug adherence and the challenges of stigma, discrimination and more that positive women come up against on a daily basis.

Jessie Mwale is one of these point people. Based in Northern Malawi, Jessie has been organizing positive women in her community to stand for their rights and communicate some of the harmful and painful side effects they experience from medication so that they can get the help they need. When one of the women in her community complained about difficult side effects and dangerous weight loss as well as poor treatment from health workers, Jessie accompanied her to the District Health Officer (DHO) to get help. In her own words: “I said ‘Enough is enough,’ and went together with [her] to the DHO who was touched by just how bad the situation was and he went straight to the antiretroviral drugs coordinator in the hospital to order an immediate change of drugs for [her].”

The campaign has given each point person a tablet that allows them to mobilize in a range of different ways like communicate across districts, create virtual groups that help them to feel connected to each other and share updates. Women activists aren’t just using the tablets to communicate data and generate critical evidence for the advocacy work of the campaign, they’re also using their tablets to strengthen and sustain the collective organizing power among them. In a context where community women are not expected to have access to such tools, this is a powerful step in the campaign.

The funny thing is that at first, some women activist leaders were not eager to use the technology because they felt they were not the ‘right’ people to use ICTs. But after going through the training, it was a different story.

I am now able to use a tablet. Me! I said these words 30 times the day that we did our [training for] data collection and MEL. It is [empowering to know] that I can do this and other women are encouraged with what they are seeing and can look forward to using [this technology] one day. ~ Stinna Kandumbo, Dowa Malawi 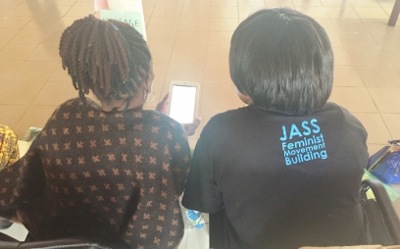 There are a lot of questions that we as women activists will need to ask as we move forward with the campaign. What risks come with using ICTs in our context? Are phones or tablets really that ‘accessible’ when there could be issues with getting online because it is so expensive?

For now, though, as women activist leaders in Malawi, we are excited to use ICTs to grow our movement, to strengthen our solidarity as a campaign and build a Malawi in which we can all live well, live healthy and live positively.

This blog was written by Sibongile Singini, JASS Malawi