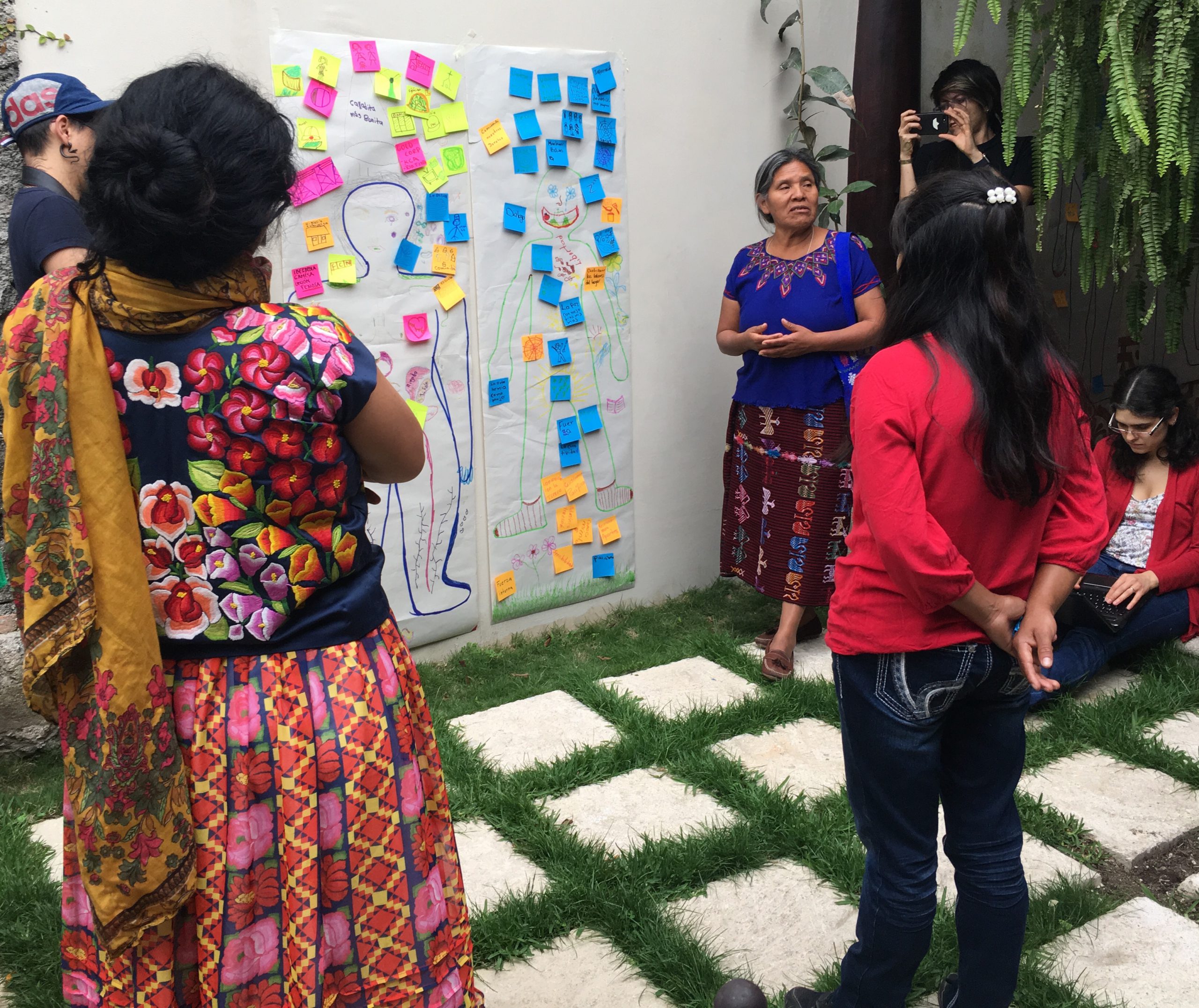 Our Power and Our Protection: Sharing Information and Knowledge on Extractivism, Antigua, Guatemala. May 21-23, 2018

After the hugs – among friends who hadn’t seen each other in ages, among friends who just met – six candles are lit for the opening ceremony. The Mayan calendar favors us. Today is the day of wisdom, the day of ideas, but, as Miriam Pixtún de La Puya tells us, “ideas with feet”, ideas that don’t remain abstract but help us to walk along the paths we have chosen.

The first session of the day is a mega-dose of information, first about mining: the process, its impacts, the companies and the different forms of resistance. With a simple and participatory style that invites mutual learning, a Guatemalan researcher and environmentalist explains the “ecological vision, understood as the relationship of everything with everything everywhere” that encompasses environmental, social and economic impacts of extractivism that go far beyond what we think of direct impacts.

Miriam Pixtun and Ana Sandoval of La Puya Peaceful Resistance follow and they have experienced these impacts. When they started the organization in their communities, the members established certain criteria, among them, inclusion (women and men, people of different ages, etc.) in all planning and activities; no direct dialogue with the company, instead requiring public institutions to fulfill their duties; and the development of collective processes, with no appointed leader, for both organizational and security reasons.

La Puya combines strategies of direct action, battles in the courts, information and training, working for local power, strengthening identity, and building alliances and international impact. They have faced repression, criminalization and defamation and had to address contradictions within the communities, including machismo. With the motto of “No to mining, Yes to life” the organization has won court injunctions and temporarily suspended the operations of the mine.

Although sometimes not considered an extractive industry, mega-plantations of African palm have spread and threaten communities in the region. It’s extractive because it extracts water, nutrients from the land and income from nature for the transnationals. Laura Hurtado, from Action Aid Guatemala, reports that the crop has taken over large tracts of land on our continent. Guatemala is the tenth country in African palm production in the world, and Honduras the seventh. Latin America is the region where this industry is growing fastest.

Dalila Vasquez, from Madre Tierra and a graduate of JASS’s Alquimia School, says that her seven communities on the southern coast of Guatemala have become “small islands in the sea of monocultures”.

“We have to walk through their monocultures, and if they’re fumigating, we get bathed in poison,” says Dalila. In a survey of community residents, Madre Tierra found: loss of access to land and water (“people have no choice left but to sell their labor to farms that don’t pay even the minimum wage,” Dalila points out), disease and illnesses related to exposure to toxic chemicals, and few jobs – almost all for men, who are forced to work with pesticides without protective equipment and in sub-standard working conditions. She repeats a constant refrain in today’s testimonies: people have nowhere to go to defend their rights and interests because the government institutions in charge of monitoring take the companies’ side.

“For example, they warn the plantations when they’re going to inspect and the managers issue protective equipment only these days,” she notes. The Red Sur organization in the region denounces the impacts and abuses of monoculture companies, but there is a lot of fear. “There have been deaths of leaders who have complained about this and communities are already dependent on the jobs so people could be left without work and without land.”

Bettina Cruz, of the Assembly of Indigenous Peoples of the Isthmus in Defense of the Land and the Territory in Oaxaca, is up against the same kinds of corporations, but with a green façade. Large wind energy companies have taken land away from indigenous communities, pollute the water and soil, and harm the health of local people and animals. With the commodification of green energy in international carbon markets, this industry has become a new opportunity for “looting capitalism”, she tells us. The large-scale projects cause inter-community conflicts, displacement and migration, destruction of ritual and planting areas and the loss of women’s traditional economic activities. Several opposition members, including Bettina, have faced criminalization and jail.

Maria Felicita Lopez, of the Independent Lenca Peace Movement of Honduras (MILPAH), describes the efforts of her organization to defend their land and territory from encroaching megaprojects. In that effort, which has cost lives, “the recovery of the Lenca worldview, testimonial therapy, and using our traditional beliefs have helped us to continue working.”

Lilian Borja, also from Honduras, recounts her experience of persecution in the defense of landand territory, “Entrepreneurs have a lot of land in a few hands, but peasant farmers have no land to work. We’re fighting against a monster that is the sugar industry … and against a murderous government– For us, there are no laws, there are no rights,” she says through her tears.

Honduras is experiencing a boom in megaprojects and accompanying violence. JASS Honduras carried out a mapping in 10 departments, which identified 199 areas affected by extractivism. Daysi Flores, JASS Honduras Country Coordinator, tells us that these projects are causing conflicts with private landowners, local governments and national and international companies. It’s hard for women to join the defense of their lands. In many communities, men prohibit women from participating in meetings, women have little access to leadership positions, and there is a “fiction of equality that is not transforming reality” by understanding it as just creating some spaces for participation of women but without considering the necessary contribution of diversity in the struggle.

María Guadalupe from Guatemala closes a long day with a historical tour of the extractive industry and how it affects the lives of women and of Mother Earth. She points out several stages: first, the World Bank and others issued personal titles to collective land to individualize ownership. Then women had to struggle for and eventually gained the right to co-ownership. Then came a new offensive with the extractive projects that forced women to broaden their analysis. She highlights the need to “take care of each other among others; to recover our bodies and develop power – not to dominate, but to share.”

The day ended with these many facets and effects of extractivism, a day that left us with a broad overview and many ideas to walk with: the need for more studies, such as environmental and health baselines that allow us to monitor impacts; how to build more alliances at all levels; how to fill gaps in knowledge and strengthen organizations.

Faced with the ravages of extractivism to communities and the land, we’re more convinced than ever that, as our environmentalist colleague put it, “The destiny of the land in the hands of patriarchy is finite.” The sad fact raises the challenge: How do we build a future in the hands of the people, organized, and with a vision of equality, justice and life?

*Names have been changed to protect the privacy of individuals.