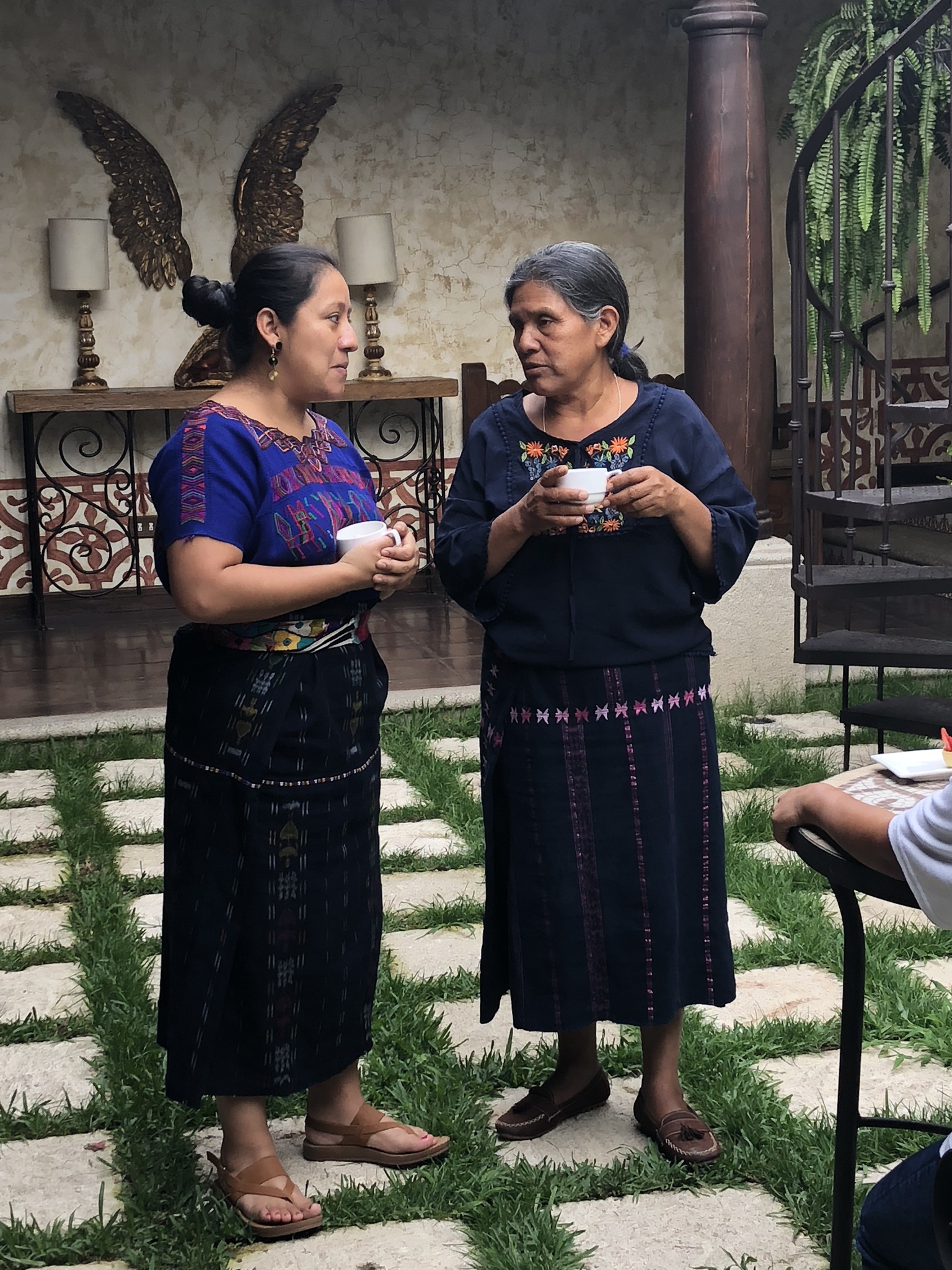 Today was a day of coming together—getting to know each other, talking about how to work together in networks and alliances, and there was even an intercontinental virtual meeting with JASS Southern Africa. From these encounters, we acquired new tools, knowledge and strategies, and we realized that we have vast internal and external resources on hand that we can use for our protection and to strengthen our movements.

In the opening ceremony, Miriam tells us that it is the day of obsidian for the Mayan calendar, a day to cut through obstacles. Overcoming the obstacles of technology, we heard the voice of Phumi Mtetwa, of JASS Southern Africa, who told us that extractivism there has been a constant battle since colonialism that changed little with independence and is now taking new forms. Politicians often have strong links with extractivist companies and their interests. Many see mining as a way out of inequality, while growing local movements are recognizing the costs and fighting back against the injustices that so-called development projects bring.

We’re struck by the fact that the power dynamics faced by African women are different – there, the chiefs, or traditional authorities, in the villages make direct agreements with the companies and the extractivist companies are usually Chinese rather than Canadian or U.S. But the exclusion of women from decision-making, the lack of consultation with the people and the tremendous economic and political power wielded by transnational corporations-supported by governments–are shared elements. Sadly, so is the use of violence against miners and local opposition. We reflect that we are clearly interconnected in our fight against extractivism, but we also know that we need to understand better in what ways and how to build mutually supportive networks ourselves.

On the other side of the world, Lisa Rankin of Canadian organization Breaking the Silence explains how they have formed links between organizations in the countries of origin of transnational corporations and local opposition. Their groups accompany Guatemalan communities in resistance, especially those facing repression for standing up to the mines.

Other tools they’ve used include Investor Alerts to warn mining company shareholders about the on-the-ground impact of their investments, although Lisa notes that the results have not been great since investors have a maximum profit mentality that does not allow much progress in raising concerns. The organization has also done studies to document the damages and violations of the mines. Along with other organizations they filed lawsuits against mining companies for crimes committed in Guatemala. The HudBay case is the first time in history that a Canadian company has been sued in the courts of their country for rape and murder in another country. The case is moving slowly, but opening up the legal process there is a milestone.
Results have also been mixed in advocacy work with embassies, due to the generally pro-business stance of governments, but they have managed to obtain information and call attention to conflicts and human rights violations. She mentions that other important ways of putting the issue before the public are delegations and working with media.

Lisa’s talk provides us with useful tools, presented with self-criticism that encourages a constant assessment to avoid using the same strategies and tactics when they don’t work. We saw that feedback between levels is a critical factor in building alliances – international work has to be defined from the local agenda, and local work must be enriched by international work.

In the discussion, several women comment that the Canadian government’s recent commitment to design a feminist foreign policy is an opportunity for us to define more precisely what a “feminist foreign policy” should be and how it should be implemented. There is a danger that it gets stuck in financial support to women’s groups, or equality is understood as parity within a fundamentally unfair system. How can it go further and reach deeper definitions, which transform the patriarchal / capitalist system and protect life?

We don’t know how to answer the question, but one thing is clear: promoting mega-mining is not a feminist policy. The Guatemalan lawyer Liliana Hernández confirms this conclusion in her presentation on the impact of extractive industries on women. She describes the damage to our bodies, to our families and to our communities caused by extractivism and the many obstacles that exist to guaranteeing human rights when it comes to confronting large companies. A major problem is the complicity of the governments that should be the guarantors of those rights.

With all this information swirling around in our heads, the afternoon is the moment to apply it to our own experience. We divide into small groups to reflect on what all this implies in our bodies and lives by filling in the figure of a woman’s body with the pains and forms of violence we suffer- headaches, pressure in the chest, stress-related illness, and the physical and psychological toll of living with fear. Then we move on to the question of what we do to take care of ourselves, what makes us feel good, and we realize that there’s a lot we can do as individuals and collectives to bring more relief and joy into our lives.

Women from far apart and distinct contexts mentioned many of the same things—we love to dance, listen to music, have sex, hang out with friends, be part of organizations, get training to feel stronger and know how to defend ourselves, rest, enjoy plants and animals and nature, laugh (we did a lot of that during the activity), play with our children and grandchildren, watch television series, eat delicious food, have a drink. Sharing all this we see that it’s really important to give ourselves permission to say when we feel good and to say when we feel bad, to know and enjoy our bodies, and have the trust to share our emotions.

And that night, we came together on the terrace under the quarter-moon of Antigua and we danced and we ate good food and we drank and we did a lot of the things that make us feel good and happy and cared for in this world.

*Names have been changes to protect the privacy of individuals.