How does a woman have sex with another woman? Can a transgender person change both their internal and external sexual organs? Why would a gay person marry someone of the opposite sex and have children with them?

A lot of “awkward questions” came out into the fresh air at JASS’ discussion in East Timor about lesbian, gay, bisexual, transgender and intersex issues. Twenty young women (and two men) from JASS’ young women’s network gathered to clear up confusion. “We don’t always know how to respond to challenging questions like these,” said one woman, or how to talk about LGBTI.

The discussion was designed to help young people respond to these types of questions when they’re doing movement-building work on women’s rights in all sorts of communities. They also had some of their own questions, like whether sexual orientation is a choice or something we are born with, or whether HIV/AIDS can be transmitted during gay sex. Young Timorese women are expected to get married and have children – sometimes, it’s easier for a gay person to succumb to pressure than be open about their identity and risk rejection by family and peers. 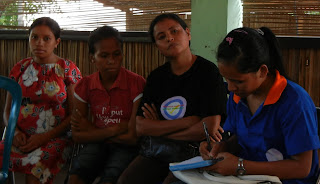 In Timor L’este it’s a little easier to be a gay man than it is to be a lesbian as gay men are more visible, while lesbians have to hide their identity because of misunderstanding and stigma (and of course patriarchy). The approach to homosexuality in this predominantly Catholic country is heavily influenced by the Catholic Church. Sunday mass is often an opportunity to talk about the “immorality” of homosexual behavior. When Timor L’este’s constitution was formulated in 2002, an early version promised to guarantee rights for all sexual orientations but, under pressure from the Church, 52 out of 88 members of parliament voted against it. That left the gay community susceptible to marginalization, discrimination and even violence.

The JASS conversation finished with a broader understanding of sex and sexuality rights. The group agreed on the importance of an inclusive women’s movement dedicated to combatting discrimination in all forms. In a country less than a decade old, it is the responsibility of young leaders to reduce stigma and homophobia, and to contribute to a more tolerant society where ALL people can feel free to be themselves. Three key strategies to achieve this goal were recommended: 1. Take responsibility to get informed about the facts yourself so that you can educate others; 2. In your work with communities, create open and safe spaces like this one to promote discussion for greater understanding and acceptance; and 3. Speak up when you hear people making jokes or derogatory comments about the LGBTI community.