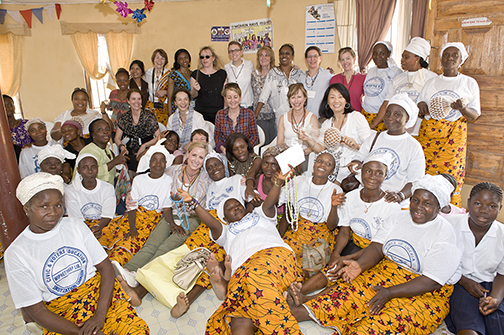 -six women – Liberian and their visitors – several small children and a few men are pressed into the round, mud-walled hut. The Liberians wear matching bright yellow lapas (cloth wrap) and white T-shirts with various slogans: “No more corruption!” “Say NO to rape!” “Peace, no more violence!”   “Women Oh Women!” Ma Anni shouts, and the women shout back “Women!” Then a short prayer thanking God for the visit. A crowd of children and men fill the doorway to gape at the visitors from far away. I sit on a white plastic chair beside four Nobel Peace laureates. We’ve driven three hours from the Liberian capital, Monrovia, to learn from the women in Totota village in this Women’s Peace Hut.

One of the world’s most powerful stories of women’s organizing and activism comes from Liberia. The Women of Liberia Mass Action for Peace mobilized hundreds of Muslim and Christian women. With prayer, extraordinary courage, and even a sex boycott, the women forced feuding warlords and factions to end a brutal 14-year civil war in 2003. The story is known everywhere, thanks to the moving film Pray the Devil Back to Hell and the inspiring memoir Mighty Be Our Powers: How Sisterhood, Prayer and Sex changed a Nation at War by the 2011 Nobel Peace Prize winner, Leymah Gbowee. But what has happened since? How are women faring in the reconstruction process, and how are they working to build sustainable peace? That’s what we’ve come to find out.

Our delegation of mostly American women is led by Leymah Gbowee and other Nobel Peace laureates, Jody Williams, Mairead Maguire, and Shirin Ebadi, and organized by the Nobel Women’s Initiative and Leymah’s foundation. As we spend time in three different villages, I get the chance to speak with women grassroots activists who organizing against other forms of violence, the violence waged against the bodies of women and girls in families, in homes, on the way to the market or fetching water, in schools and at work.

In Totota and in another village, Weala, we gather inside the Women’s Peace Hut. These small round constructions stand in the center of the two villages, visible and respected as women’s justice centers, the product and powerful symbol of the tireless organizing and awareness-raising continued since the war.  The Women for Peace Network (WIPNET) to which these women belong traces its roots to the Mass Action during the war that pressured the warlords to sign the peace agreement in 2003. Inside each hut, cases of rape, domestic violence and everyday disputes are brought to light and either mediated or referred to the police.

In Totota, the women talk about working closely with the police, located nearby, to find the perpetrators. In the midst of reconstruction, Liberia’s police lack the basics – from transport to money for photocopies – to carry out their duties. The police chief in Totota says, “We rely on these women to do our job. In some cases, they can get confessions or evidence that we are unable to find. People trust them.”

In Weala, the local commissioner praises the peace hut and the local women’s peace network. “These women are not only bringing peace and fighting violence, they are building democracy and justice in our community.” The police chief in Totota describes the partnership with WIPNET and its grassroots leaders as a perfect example of “community policing to fight rape and violence together.”

Speaking in characteristically bold language to the journalists who followed us to Weala, Leymah says, “…the women’s peace huts are up-ending our Liberian tradition of the Palaver Hut (a traditional community dispute resolution structure promoted by the Truth and Reconciliation process.) Men run the Palaver Hut. Women observe from the outside and participate when asked by saying No or Yes. Men are welcome into the Women’s Peace Hut but it’s a women’s space run by women where all voices count. It’s in this way that women are deconstructing patriarchy and the violence it breeds.”

Our delegation asks the women what makes them brave enough to confront rape and sexual abuse, problems hidden by silence and stigma in any culture. The women point to each other. “We are powerful together,” one explains. As Leymah says, “Collective power is built on individual power. Women are empowered by coming together, and the organizing awakens the inner activist lying deep inside every woman.”

After more than a decade, the United Nations peacekeeping mission in Liberia is preparing to wind down while a different form of violence – particularly sexual and gender-based violence – rages on. Yet there is no doubt that Liberian women, especially grassroots women building their networks, changing mindsets, and taking on violence one day at a time, are the new peacekeepers, building the Liberia of the future.