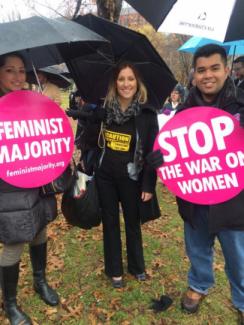 During 16 Days of Activism on December 9, JASS Crossregional Program Director, Carrie Wilson spoke at a White House Rally on behalf of the International Campaign to Stop Rape and Gender Violence in Conflict—which JASS is a member of the advisory committee. This rally called on U.S. President, Barack Obama to break barriers to post-rape care for women and girls in conflict countries.

I’m speaking here today on behalf of the more than 5,000 individuals and 800 organizations worldwide that make up The International Campaign to Stop Rape & Gender Violence in conflict situations, including my own organization—JASS.

The campaign is the first-ever global collaboration between Nobel Peace Laureates, international advocacy organizations and groups working at the regional and community levels to amplify the voices and efforts of women to end rape & gender violence in conflict.

In contexts where women’s bodies have become the battleground in the struggle for power, the Campaign calls for bold and urgent political action to PREVENT and PROSECUTE perpetrators of sexual violence, as well as PROTECT communities and sexual violence survivors including sustained resources for local women’s organizations that provide survivors with medical and psychological care.

From Myanmar to Syria to the Congo and beyond, rape is used as a deliberate tactic to humiliate, control and instill fear. In these conflicts, women and girls who experience the horror of rape have to not only watch their attackers go free and be left to deal with the effect of rape on their body, mind and spirit, but when a woman becomes pregnant by her rapist, she can’t access safe abortion.

As we’ve seen time and time again throughout history in every country of the world, when a woman can’t access a safe and legal abortion, she has no choice but to turn to dangerous methods—putting her health and life at risk or else live with the constant reminder of the trauma from her rape. Haven’t these women and the communities that they are rebuilding dealt with enough death and destruction?

Amazingly, local women and women’s groups are leading a range of efforts to end sexual violence in conflict and provide survivors with essential support.

In Central America and Mexico, where JASS works, women doing frontline human rights work—who are experiencing violence at alarming rates—are forming informal networks at the local, national and regional level to protect themselves, strengthen their activism and mobilize solidarity and resources for women. In the absence of the most basic protection or care by their governments and in the face of corrupt or collapsed justice systems, these networks are connecting women to legal services, risk assessments, psychological support, safe houses and urgent medical services including abortion.

International support for these critical efforts to help those affected by sexual violence must not only denounce violence against women but must ensure that aid money doesn’t force local groups to choose between offering abortion services or accepting much-needed funding to do their work.

The US claims to be a world leader in the fight against wartime rape and yet it is lagging behind the rest of the international community in supporting post rape care. President Obama, don’t let politics get in the way of doing the right thing. Eliminate barriers to women’s safe abortion access. If you do not act when you have the power to act, then you bear responsibility too.

In the words of Leymah Gbowee, Nobel Peace Laureate from Liberia:

“If the survivors of such horrific crimes are doing things differently to repair their lives, it is time for those of us who have vowed to journey with them to take the cue: we must start to do things differently.”

“WE STAND WITH WOMEN AND GIRLS!”