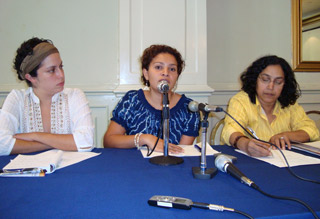 “Las Petateras,” JASS’s movement building allies in Mesoamerica, convened a press conference this morning to kick-off the activities planned during the Americas Social Forum, as well as to announce the declaration made by the Nobel Women’s Initiative denouncing the violence, hostility and public smear campaign being conducted by Daniel Ortega’s government in Nicaragua against outspoken feminist activists and leaders. 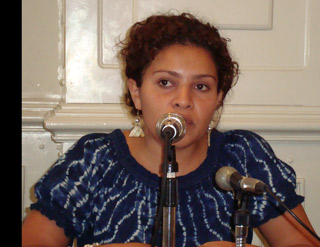 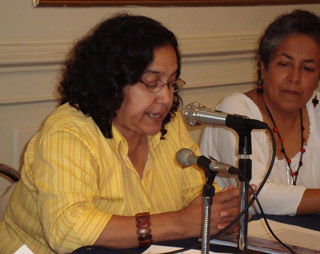 Emely Flores, from El Salvador, spoke about the similar acts of violence and impunity exercised against women’s organizations in her country. Patricia Orozco, from the Autonomous Women’s Movement in Nicaragua, which has received the brunt of government-led attacks and repression, spoke passionately about the strong anti-feminist behavior practiced by the Nicaraguan government, and how women will never give up the struggle for equality and justice, no matter how difficult the situation becomes. Marusia Lopez Cruz announced the declaration written by the Nobel women in solidarity with the feminists in Nicaragua. The statement declared, among other things, that “the Nicaraguan government is intimidating the people and organizations that fight for the defense of human rights. We encourage the Nicaraguan government to stop its repression against the Autonomous Women’s Movement and other activists. In particular, we express our solidarity with Nicaraguan feminists who find themselves attacked unjustly for their continued defense of reproductive rights and basic freedoms … Another world is possible. And that world includes women’s full equality and freedom from violence. We urge all those who have come together in the name of justice and peace to stand firm that women’s rights and equality is at the heart of our dreams, and actions, for a better world.” (read the entire declaration) 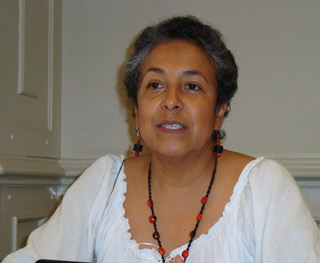 Liduvina Mendez Garcia went on to present the actions and activities the Petateras are involved in during the week-long Social Forum, including several workshops and panels, and the 5th “Observatorio de la Transgresion Feminista” or “Women Crossing the Line,” where, along with Radio Feminista, women’s voices, actions, and denouncements will be captured and amplified for the world to listen. Our voices will be heard. 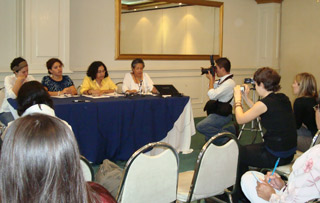 The opening ceremony of the III Americas Social Forum began with a rousing action by our sisters in El Salvador. Las Petateras and other members of the JASS delegation joined in as they took over the space, wearing white sheets and with white face paint, chanting “Nosotras parimos, nosotras decidimos,” or “We give birth, we decide!” along with the crowd favorite “Sacan sus rosarios, de nuestras ovarios,” or “Take your rosaries out of our ovaries!”
The JASS delegation to the forum includes activists from MesoAmerica and the United States.
Read more at www.justassociates.org www.petateras.org and www.radiofeminista.net
Thank you to FIRE for the images.