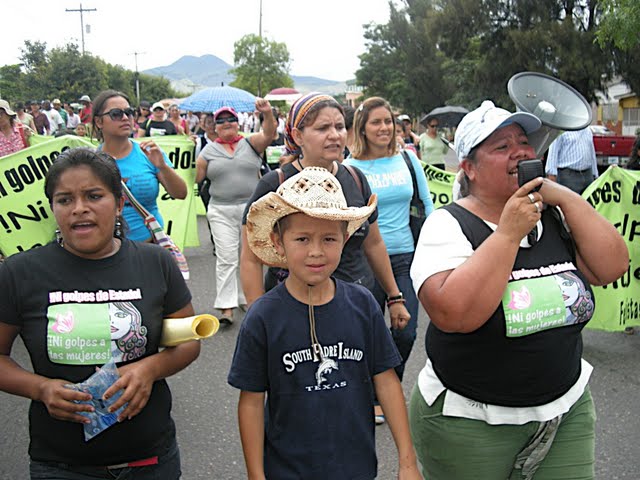 It has been an intense couple of days since we arrived in Honduras on Sunday. When I catch the words “I’m tired” coming out of my mouth I stop myself because standing next to my feminist sisters from Honduras, I have nothing to complain about. These women have been marching every day, EVERY day, rain or shine, military or no military, sometimes with bruises from the march the day before. We joined the march today and there was so much energy, you would never know that they had been doing this for 52 days. One of the woman screamed “Estan cansadas!? (translation: are you tired!?) to which everyone responded with a resounding “NO”. Incredible…but not surprising given what has been happening in this country since their democratically elected president was forcibly removed from his post in a coup d’etat on June 28th.

Under the military coup, women’s rights have suffered a huge blow. Yesterday, during a forum organized by Honduran Feminists in Resistance at the nurses college (whose 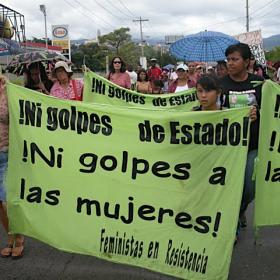 administrators, when hold events there because of the anti coup content), participants shared stories of physical and verbal intimidation and harassment by the military. Policemen have used their batons to strike women’s private parts (in some cases sticking them into their vaginas) and are using their words to make derogatory and sexual comments to women participating in marches.

These accounts are appalling and clearly intended by the military to deter people from continuing to march or speak out against the coup but instead they are having the opposite effect – they are strengthening the solidarity and resilience of those in resistance. As the slogan goes, “Nos tienen miedo porque no tenemos miedo” (“They fear us because we are not afraid”). There is so much more to share but it will have to wait for tomorrow because the Feminists in Resistance are about to meet to plan and strategize for tomorrow’s march. Onward! they discovered the reason for the meeting, informed us that we can no longer