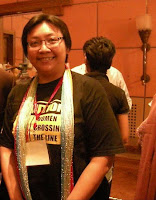 From 16th – 18th April, I joined over 300 participants from all over Southeast Asia and South Asia and beyond at CREA’s Count Me In! Conference in Kathmandu, Nepal. Count Me In! focuses on marginalized women who have been pushed to the sidelines of social life, sometimes barely acknowledged as human beings and very often deprived of many basic human rights. The conference was a space to talk about the experiences of women on the periphery such as sex workers and their families, women with disabilities, and LBT people.

Over three days, I participated in many activities to analyze the ways women are marginalized; the specific issues and challenges they encounter; strategies to address these issues, needs and challenges; and inspiring case studies from various groups about how they have managed to make an impact and organize around marginalized women’s rights.

One of the major highlights was the opening session by CREA director, Geetanjali Misra and Sapna Pradhan Mallah, a Nepalese lawyer and member of the Nepalese Constituent Assembly. Mallah began her work as a women’s activist at a young age and after joining parliament, she struggled to change the State Constitution in support of women’s issues and fought for women’s reproductive health, the provision of safe abortion services and standard health insurance for pregnant women.

Some of the other workshops I attended included a presentation by Datta Bisakha who is the Chairman of Point of View, an organization that works with women who are marginalized “legally” and encourages dialogue between diverse women’s movements. She highlighted the truth that diversifying women’s discourses and drawing women of different experiences into our movements will not weaken us. Instead, it will reshape and strengthen the women’s movement for the better and allow us to make greater impact. Anita Ghai shared the experiences of women with disabilities who are often subject to discrimination and violence on multiple levels—in the family, the workplace, access to public facilities, healthcare, the complete disregard of their sexuality and sexual health.

A panel on fundamentalisms put the spotlight on women who live in the danger zone where fighting for women’s issues often puts them in direct conflict with fundamentalist groups. In an open discussion group, well-known television host, Begum Nawazish Ali, spoke about transfeminisme, and the need for alliances between women’s and trans movements in the struggle against patriarchy in its many forms. One panel discussed the use of sport in building women’s movements, especially young women. As women, we are sometimes physically restricted in the public sphere because of culture and societal expectations. Sport can be an effective empowerment tool, strengthening to exist and thrive in public areas that are often controlled by men, gain confidence in themselves and respect from others.

Sunil Pant, the first openly gay Member of Parliament in Nepal shared insights on his organization, the Blue Diamond Society which worked through alliances with the media and other human rights groups to encourage public discourse on gender justice and LGBT rights and to push for concrete political policies to support and protect LGBT communities in the country. Many groups shared inspiring success stories, from activists in Bangladesh who pushed for dialogue with various communities and networks to gain support for women candidates for parliament to a study conducted by SNEHA that shed light on the sexualities of minority and marginalized groups.

One of the most powerful experiences for me was the third day’s presentation by renowned author, Arundhati Roy, who reminded us that efforts to exclude women from the larger movement should be faced and fought together. We must all work collectively to fight for the issues that mean the most to us as women without marginalizing or abandoning members of the women’s community at large. She urged us not to see women as victims, not to see ourselves as victims—but to recognize the strength that women can have when they understand themselves and are able to stand together.

The conference opened our minds and hearts to the differences and commonalities between us, and how we can work together and be stronger together. The closing remarks by Srilatha Baltiwala left us with the inspiring message that as women, we have to set our own course even if many are moving in the opposite direction. People may demand that women walk and not dance. So when someone asks us, we should respond, “You think I can’t dance? Watch me!”