“Don’t accept the money. Money can run out, but the land remains forever.” —Amadiba Crisis Committee

JASS Southern Africa is excited to invite you to our regional dialogue “Women Defending Land and Life” as part of our virtual dialogue series Women Radically Transforming a World in Crisis , spotlighting the struggle of the community of Xolobeni organized under the Amadiba Crisis Committee (ACC). What is strategic resourcing of movements?

ACC has been working with the Xolobeni communities for years to protect their precious titanium reserves and ancestral lands from mining corporations. Despite facing immense risks including violence, threats, and death in reprisal of their organized resistance, ACC leaders and land defenders are determined in their resolve to preserve their land, culture, and identity for future generations to come.

During the dialogue, we will engage and spotlight the incredible organizing story of ACC, and feature one of its formidable leaders, Nonhle Mbuthuma in conversation with women land defenders, Zandile Nsibande (Abahlali baseMjondolo) and Makoma Lekalakala (Earthlife). Together, the women leaders will draw on their experiences to share movement lessons on organizing for defending land and life. 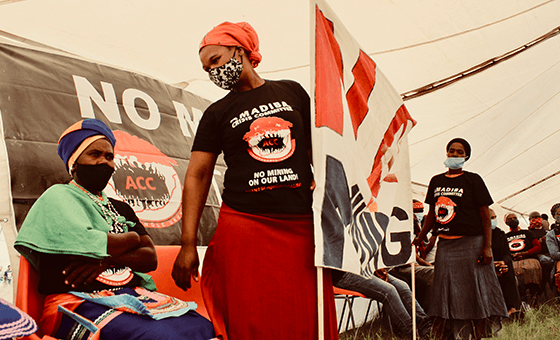 “Umhlaba Nguwe (The Land Is You)”, is a 19 minute video, shot in Xolobeni, South Africa between 2020 – 2021, spotlighting the incredible organizing story of the Amadiba Crisis Committee, through the voice of one of its formidable leaders, Nonhle Mbuthuma. The ACC has worked tirelessly for many years with the community of Xolobeni to protect and fight against mining corporations’ quests to mine titanium in communities ancestral land. This video showcases the immense wealth of the natural landscape of Xolobeni, from the valuable medicinal plants that the community uses through the wisdom of indigenous medicine, to the school they built with their own funds and the treasure that is the Strelitzia plant. Facing violent opposition by corporations and government allies for years, with many of their leaders constantly under attack,, the video documents the determination and resolve of this community to preserve their land, culture, and identity for future generations to come.