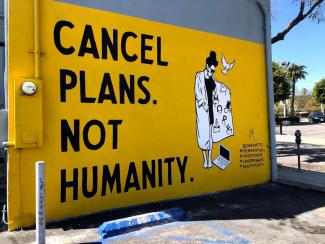 We’re months into a global health pandemic that U.N. Secretary-General, António Guterres has described as “the most challenging crisis we have faced since the Second World War”. COVID-19 has killed thousands, infected millions, and changed our way of life. To better understand what is happening on the ground, JASS spoke to our staff and allies on four continents about the impact of COVID-19 on their lives, their communities and the work they do in their community-based organizations and formations. We found some common threads: fragile social infrastructure, an alarming rise in authoritarianism and violence, deepening inequality and precarity, and the raw exposure of a fundamental contradiction between capitalism and life that constitutes a major threat to women’s lives and collective survival.

Governments were unprepared to cope with COVID-19 and its impacts. Four decades of neoliberalism have left public health systems crippled by privatization, underfunded, understaffed and ill-equipped. In many countries, there is no public health coverage, limiting access to care for low-income families and excluding migrants. Poor countries whose resources have been drained by transnational corporations, corruption, and erosions in democracy cannot meet the demands of the health crisis. Honduras only has 200 respiratory units. In Indonesia, most of the COVID-19 referral hospitals are not equipped to treat patients. The pandemic has brought to the fore the result of years of private-sector looting of public goods and services for profit and the urgency of building a universal public health care system.

With strained health services, women are having to postpone or forego non-COVID-related medical care, including pregnancy and sexual health care. Access to basic needs including food, water, electricity, and communications has decreased in areas already underserved, due to government’s incapacity and people’s inability to pay. Confined to homes that lack services, women (especially poor, indigenous, rural, and migrant women, and workers in the informal sector) work double-time to make ends meet with little or no support from the state. This takes a toll on their mental and physical health at a time when they are least likely to be attended to.

The rise in authoritarianism

While there is widespread acceptance of social distancing measures, governments throughout the world are implementing and enforcing Draconian lockdown measures that have little scientific justification and further authoritarian agendas of social control. As a JASS colleague in Honduras stated, “The level of military presence is like we’re preparing for a war, not a health crisis.” In the Philippines, the government launched an “enhanced community quarantine” (ECQ) – a military lockdown with checkpoints in all cities and municipal borders. In Metro Manila, massive police deployment has led to more than 130,000 arrests for violating lockdown. The congress granted President Duterte emergency powers including an additional Php270 billion budget (around USD5.4billion) to address COVID-19 that many fear will consolidate his power rather than the health of the nation.

Our allies report that Cambodia passed a controversial state of emergency law that grants President Hun Sen vast new powers, including: surveillance of telecommunications and sweeping controls over the press and social media, further restriction of freedom of movement and assembly, seizure of private property, and enforced quarantines. In Honduras, the government has suspended freedom of association, speech, expression, and assembly, among others, as part of mandatory lockdown. In South Africa, the government has deployed an additional 70,000 troops with the pretext of the pandemic – a crackdown that recalls images of Apartheid. In Guatemala, the deployment of troops in indigenous areas raises the specter of the 80’s genocide.

The increased presence of state security forces and surveillance in countries like Zimbabwe and South Africa further closes off democratic space and has led to a sharp rise in human rights abuses and attacks on human rights defenders. The declaration of states of emergency, disaster, exception, or siege, strip the population of civil liberties and rights, justify militarization, and have failed to improve public safety. In all countries, gender-based violence, especially domestic violence, is escalating behind closed doors while police patrol the streets and often fail to respond to women’s calls for help.

Lockdown measures are decimating local and national economies and deepening existing inequalities. Many people cannot work from home and still earn an income. In Zimbabwe, which has the largest informal economy on the continent constituting 60% of all economic activity, lockdown measures halt people’s ability to make a daily living. The government has allowed public food markets to remain open despite fears of community spread and the stigma and discrimination that comes with a COVID-19 test. In Honduras, where the informal sector employs 70% of Hondurans, street sellers have been banned and only supermarkets allowed to operate. In Cambodia, the garment industry which employs mostly women, shut down and hundreds have lost their jobs. Tens of thousands more be laid off in the coming weeks if the flow of raw materials into the country does not pick up.

Government emergency programs that offer food or cash transfers are insufficient, exclude many and cannot be sustained in the longer-term. They are stopgap measures that attempt to avoid both the immediate implosion of the system and the deep structural changes that are so urgently needed.

Most leaders are now focused on opening up and reviving their economies, despite health consequences. While economic decline is a real concern, epidemiologists and medical advisors are concerned that this decision will cause a surge in infections.

States are now called on to channel billions in public funds to save the market economy. For governments in the “Global South” whose natural wealth has been systematically depleted by the North, this is unfair and impossible. Under the “disaster capitalism” scenario described by author Naomi Klein, the COVID-19 contingency provides an opportunity for the private sector to syphon off more public resources in giant bailouts, to encroach on natural resources in the name of “investment” and to repress and eliminate resistances.

A stark contradiction emerges between that path to death and destruction or a path based on preserving and enriching lives. Women, concentrated in jobs and activities that foster life, must play a central role in decision-making at this historic crossroads, not just in government policy, but in resistance across the planet.

Discrimination against women intersected by race, class, sexual orientation, age, disability, national origin, religion, and language is intensifying. Women are required to compensate for the breakdown in state services, while facing job and income loss; state, criminal and domestic violence; and attacks on their land, territories, and rights. Although governments and the media pay lip service to women’s labor as care workers, essential workers, frontline responders and community builders, and warn of the risk of violence and poverty, there are few effective policy responses to relieve women of added burdens, compensate their work or increase protection.