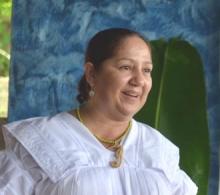 Mariela is a feminist popular educator, an economist and long-time feminist human rights advocate from Panama. Since 1980, she has been a founder of many women’s human rights organizations at the national and Latin American levels. As a part of the women’s movement from 1992-2004, Mariela designed and coordinated the collective production of the first Equality Plan of Panama, now known as Law 4 of Equal Opportunity, and coordinated the strategies for the Women and Development electoral pacts in the 1994-1999 and 2004 elections. In collaboration with other colleagues, Mariela created the architecture for public policies on gender and, until February of 2011, served as a member of the Women’s National Council in Panama. She is the former director of the Latin American Popular Education Network “Alforja” and the Panamanian Center for Social Studies and Action (CEASPA).
Mariela is a founding member of the Global Network of Feminist Educators, JASS (Just Associates) and the Gender Collective at the Council for Adult Education in Latin America. She serves as an advisor to several civil society organizations, among them the Youth Coalition for Integral Education on sexual and reproductive health, Aplafa. She is a founding member of the Panamanian Women’s Alliance and the Women and Development Forum, the Citizen Alliance and the Citizen Assembly of Panama. was the former coordinator of the Mesoamerican Network of Alforja Popular Educators and former director of the Panamanian Center for Social Studies and Action (CEASPA). Mariela currently oversees the creation of the Raul Leis International Institute with headquarters in Panama, and its Art and Creativity Schools for Children and Youth on the island of Taboga.