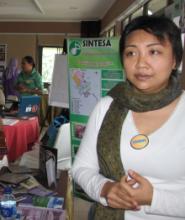 Maria Mustika brought her limitless energy and work ethic along with a deep background in gender and diversity issues to the JASS Southeast Asia core team. Based in Indonesia, Maria credited the JASS MBI in 2008 for introducing her to feminism and to the power analysis, “my first liberation and celebration of my womanhood [was at the MBI], and since then, I can’t stop myself and endorse women’s needs everywhere I go.” Maria was a talented photographer and writer as well as a grassroots organiser for the rights of LGBT people in her region with the organisation, Centre for Marginalised and Community Studies (CMARS).

Previously, Maria worked on gender mainstreaming with Savy Amira, a local NGO in Surabaya. She then joined the LGBT group, GAYa Nusantara. She also spoke against violence as a member of the Indonesian Women Coalition.

Maria was also passionate about film and photography.

Women, Seize the Online Space!
Breaking Barriers: Writing Herstories from the Heart
Days of Learning: You think I can’t dance? Watch me!
We or Them
Getting the Facts Straight on Indonesia’s Virginity Tests for Young Women
Our Love