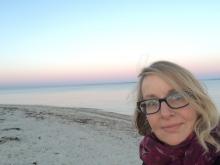 For over 30 years, Lisa VeneKlasen has been an activist, educator, strategist and organization-builder with a variety of social justice and women’s rights efforts worldwide. Trained as a community organizer and popular educator, Lisa’s student activism in the early 1980s introduced her to social movement leaders in Latin America and the US, and led her to Nicaragua where she worked for two years with the Sandinista government’s renowned adult literacy and agrarian reform programs. In pursuit of more direct US policy influence as part of the solidarity and peace movements of the times, she co-led 30 fact-finding missions of Congresspeople, trade unionists, civil rights and other opinion leaders to Central America and was an organizer with the national Central America Peace Campaign. She also served as Legislative Aid for a US Congressional Representative.

Prior to founding JASS in 2002, Lisa worked with women’s rights and development organizations and community groups in Asia, Africa, Latin America and Eastern Europe. With Women, Law and Development International for over five years, she relocated to Zimbabwe to design and coordinate a 10-country training and networking project that led to the creation of the pan-African Women in Law and Development in Africa (WiLDAF). She worked closely with dozens of women’s groups in Africa and Eastern Europe to prepare for the UN Women’s Conference in Beijing in 1995. From 1997-2001, she was the Assistant Director of the Global Women in Politics program of the Asia Foundation, where she ran a multi-regional advocacy training and political leadership project in fifteen countries.

Her practical and conceptual contributions on power, empowerment and advocacy, published initially in A New Weave of People, Power and Politics: The Action Guide to Advocacy and Citizen Participation(2002;2006) and in close collaboration with the Institute for Development Studies, have influenced and are used by many international organizations including Plan International, Oxfam International and Action Aid International.

She serves on the Advisory Group of the Accountability Research Center at American University; served on the Reference Group of the International Budget Partnership and on the Board of the Bank Information Center. She is an advisor to the Nobel Women’s Initiative. In 2017 Lisa was named one of 200 Women Who Will Change the Way You See the World. She graduated from Smith College, and has Masters in Public Policy from the Kennedy School of Government at Harvard University.