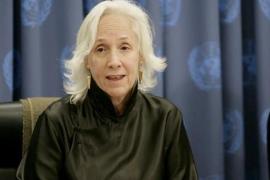 Board of Directors, Co-chair
United States

Joanne Sandler brings a wealth of knowledge and experience to JASS. Joanne is currently an independent consultant focused on women’s human rights and a Senior Associate of Gender@Work, an international collaborative that strengthens organizations to build cultures of equality and social justice. Between 2001 and 2010, Joanne was part of the leadership team at the UN Development Fund for Women (UNIFEM) as its Deputy Executive Director for Programmes, and was part of the transition team for the establishment of UN Women (2010 – 2011). As Deputy Executive Director, Joanne guided the organization’s support toward programmes that advance women’s empowerment and rights throughout the developing world. Joanne oversaw the development and monitoring of the organization’s strategic plans, chaired its Programme Appraisal Committee, and played a key role in establishing or growing numerous initiatives while at UNIFEM, including: special grantmaking funds, such as the UN Trust Fund to End Violence against Women and the Fund for Gender Equality; innovative pilot programmes, including Safe Cities for Women and Girls, Gender-Responsive Planning and Budgeting, and Progress of the World’s Women, UN Women’s flagship publication. During her time on its leadership team, UNIFEM grew from an organisation with an $18 million annual budget and presence in 20 countries to a $200 million annual budget with offices in 80 countries.

Joanne has worked with international organizations, private foundations, academic institutions, and women’s organizations and networks worldwide for the past 30 years. She has served on Boards of Directors and Advisory Boards of numerous organizations, from Breakthrough, to the Association for Women’s Rights in Development, Women Win, and Women Make Movies.