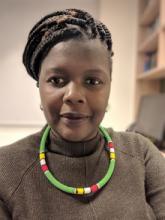 Board of Directors, Co-chair
United Kingdom

Dr Awino Okech is a lecturer at the Centre for Gender Studies at School of Oriental and African Studies (SOAS), University of London. Dr Okech brings over twelve years of social justice transformation work in Eastern Africa, the Great Lakes region, and South Africa to her teaching and research work. Awino has worked with and supported international and inter-governmental organisations on women’s rights, conflict transformation, policing and security sector governance. Her contribution to research and knowledge transfer is reflected in her role as lead researcher for Niger and Burkina Faso in a United Nations Economic Commission of Africa commissioned study on “Causes and Consequences of conflict in the Sahel” in 2015. She also served as the lead drafter for the African Union’s Operational Guidelines on Gender and Security Sector Reform in 2014 and supported UNDP’s Somaliland Civilian Police Programme review their police reform work in Hargeisa in 2012. Her publications include among others: Women and Security Governance in Africa (2011) co-edited with ‘Funmi Olonisakin; “Gendered security: Between ethno-nationalism and constitution making in Kenya” (2013); “Dealing with Asymmetrical Conflict: Lessons from Kenya” (2015); “Boundary Anxieties and Infrastructures of Violence: Exploring Somali Identity in Post-Westgate Kenya” (forthcoming) and “Protest and Power: Gender, State and Society in Africa” (forthcoming).

Volver arriba
We use cookies on our website to give you the most relevant experience by remembering your preferences and repeat visits. By clicking “Accept All”, you consent to the use of ALL the cookies. However, you may visit "Cookie Settings" to provide a controlled consent.
Cookie SettingsAccept All
Manage consent