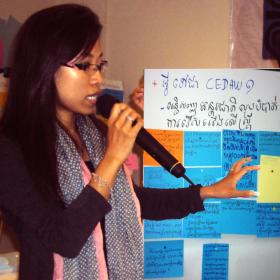 The young women of Cambodia have come a long way. Almost four years after its groundbreaking formation, the JASS-inspired Cambodian Young Women’s Empowerment Network (CYWEN) is living up to its name – empowering young women and equipping them with knowledge and skills. CYWEN members led its own awareness-raising dialogues and trainings on themes as varied as violence against women, migration, access to education, maternal mortality, leadership and most recently, youth participation in the elections. In the process, it expanded its reach and influence to more young women.

Beyond being an influence, CYWEN is now initiating efforts to mobilize and organize young women and they are realizing that this is the most important avenue for change. And the first step is summed up by Kunthea Chan, former CYWEN chair and now leading the JASS regional processes as Program Coordinator:

“Education is key to building the feminist movement in Cambodia so that young Cambodian women gain confidence.  Breaking the culture of silence will happen when young women understand the root cause of their fear.  For women to claim their rights, we need to create opportunities for women to speak up and be heard. We need to build young women’s confidence in themselves and one of the ways to do this is by education.”

This election month, CYWEN proved that education is indeed key to making the youth act as dozens of CYWEN members and network trooped to the polling stations not just to cast their votes but to serve as poll watchers – to ensure that election policies are followed. Women’s participation in the elections is seen as a step to hear women’s voices.

Cambodian women’s stake in the country’s development is high; they make up more than half of the population. Unfortunately, they also comprise the majority of the poor. High rates of illiteracy are coupled with equally high rates of gender-based violence; a lack of economic opportunities continues to represent serious obstacles to women’s development.

That is why, in a bid to further deepen its own understanding of the different mechanisms that women can use in advancing their interests, CYWEN is now venturing into holding discussions on the Convention on the Elimination of all forms of Discrimination against Women (CEDAW) initially for its members and network of individuals.

CYWEN’s series of training workshops on CEDAW is a step ahead in their usual issue discussions. It is also a step ahead for Cambodian women who are traditionally seen as “homemakers” or had a particular and defined role with a limited social life. There are various traditional codes of conduct for women as described in numerous proverbs, folktales and novels. But this is slowly changing and CYWEN is one of a few young women’s organizations in the country which vows to turn the tide.

Aware of Cambodia’s ratification of the Optional Protocol to CEDAW, CYWEN grabbed the opportunity to facilitate CEDAW training on 25-26 May 2013, in coordination with Gender and Development for Cambodia (GADC). Female university students and NGO workers attended the training.

“The outcome was a dynamic and participatory discussion that reflected a realistic picture of women’s situation in Cambodia such as the prevalence of land and home evictions, the swelling of rape cases, and impunity and injustice.  Through safe spaces of discussion and exchange, young women’s commitment is stirred,” says Sophoan Chan, chair of CYWEN and overall organizer of the training.

At the end of the sessions, the participants expressed their willingness to continue teaching about women’s rights, including CEDAW and other human rights mechanisms for their fellow young women.

The trainings specifically sought to unite the CYWEN team by strengthening their basic awareness of CEDAW, gender, and analysis of women’s situation in Cambodia and all mechanisms of protection, and an understanding of patriarchy and feminism.

“With this training, I was able to understand about the national and international framework and treaties that support women’s rights. I strongly feel confident to speak about international statutes such as CEDAW that government committed to exercise and we as women should make the government accountable to uphold it,” says one CYWEN member.

“I also had the chance to share my ideas and reflect on my own personal life within the context of Cambodian society. I feel that Cambodian women face so many challenges yet we are given less chances to improve our personal and public life,” says JASS Southeast Asia’s Sophorn Yit, who is also a CYWEN member.

In a country with a population that is reeling from the impact of the Khmer Rouge regime and is now slowly grappling with human rights, international agreements such as the CEDAW are vital. Such instruments could be used as framework for realizing women’s human rights.

But beyond international statutes such as the CEDAW, CYWEN knows that, equipped with the right knowledge and skills, it is treading the path to Cambodian women’s empowerment. With young women on front and center of empowering fellow young women, the prospects for women’s organizing and making young women get involved in Cambodia are promising.