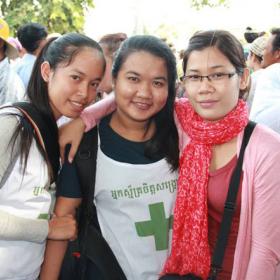 “I really would like to be part of the First Aid Group. It makes me really proud because we can help Cambodians who need immediate medical attention in case violence erupts in the peace demonstrations. We have to be prepared. Apart from being involved in social action, I can also get more information and get the gist on the political situation. Another reason why I joined is I feel it is necessary for me to know how to respond and to help people in a risk situation,” says Sum Dany, a member of the JASS-inspired Cambodian Young Women’s Empowerment Network (CYWEN).

As the political tension rises in Cambodia, several women’s groups and NGOs formed the First Aid Group – an “on call” group that will take charge of the health situation in peace assemblies – initially on the huge demonstration on September 7. The women’s groups and NGOs who created the First Aid Group are: Gender and Development for Cambodia (GADC), SILAKA, Cooperation Committee for Cambodia (CCC), Strey Khmer, Empowering Youth in Cambodia (EYC), CYWEN, and other NGOs. These groups announced a call for youth volunteers who are willing to be trained as paramedics specifically for the peace assemblies. A lot of CYWEN members joined the First Aid Group while at the same time they also enjoined their young women volunteer network in different universities to join the peace action.

To prepare the First Aid Group, SILAKA and GADC provided the young women volunteers with training courses on first aid and gave them medical packages. After the trainings, the young women were divided in three sub-groups: the Group Mobile, the Group Transfer and the Group Home Base. Group Mobile members have to stay in Freedom Park in Phnom Penh where the protesters are. Group Transfer’s function is to transport injured protesters to the hospital in case they get seriously wounded. Group Home Base members, on the other hand, have to take care of protesters who get injured near the office which serves as the ‘home base.’

Following the July 28 Cambodian national elections, opposition party Cambodia National Rescue Party (CNRP) claimed that there were ‘widespread irregularities’ and ‘fraud’ committed by the ruling party, the Cambodia People’s Party (CPP). The National Election Committee proclaimed that the CPP won majority of the seats in Parliament but both parties declared victory.

According to preliminary election figures released by Cambodia’s Information Minister Khieu Kanharith, the CPP won 68 of 123 National Assembly seats. This is a loss of 22 seats from its sweeping victory in 2008, but it is still a majority, giving the CPP a continued hold on power. The CPP lost ground to an energized opposition, the CNRP, which won 55 seats, according to early figures.

However, the opposition party rejected this preliminary election result and called for an independent committee to observe and check election irregularities. The CNRP leaders have announced its rejection of the alleged election victory of CPP and called for support from Cambodia’s kingdom. The opposition party also vowed to hold mass demonstrations if the voting irregularities were not addressed by the independent committee.

The election deadlock and tension has kept some people indoors. Though unsatisfied with the results, these residents in the capital expect post-election unrest. Some parents have even prohibited their children to attend the CNRP de 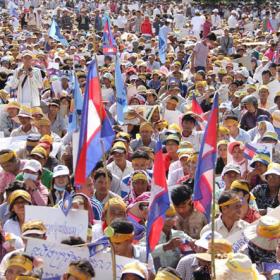 monstrations because they are worried and concerned that the demonstration will lead to violence and cause greater problems.

Before the September 7 demonstration, authorities have imposed unusual travel restrictions in a southeastern province and blocked some national roads. Despite these restrictions, the event was held without many hitches. Protesters were in full support of the opposition party in finding justice and in calling for an investigation of the alleged “illegal” election victory declaration of the CPP.

Women Come Together for Peace

Chea Sem, a woman from Prey Veng province who was carrying her baby with a message on her forehead that says “My Vote, My Nation” was one sight that struck me. I asked her why she joined this event and she said, “I came here together with other grassroots women because we need peace and justice. We need to improve the lives of the grassroots people who are facing greater challenges. I hope that our challenges will be solved by the new government.” 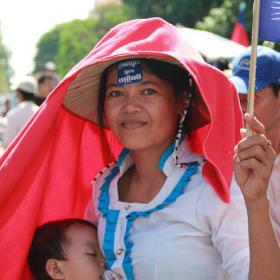 Grassroots women like Chea Sem are in full support of the opposition party:

“We also came at Freedom Park to greet CNRP President Sam Rainsy and Kem Sokha, to join the peace demonstration, to support the call for non-violence and to ask for justice for our votes,” adds Chea Sem.

Apart from grassroots women, what is noticeable is that the youth supporters of the CNRP are also active in checking on the developments concerning the political deadlock. They support the CNRP in rejecting the results of election and try to find ways to get at the truth concerning the national elections.

“I learned that we as young women can build awareness, solidarity, and collective voice to help our people. We can also be a role model for other young women to get them involved in social action. I have learned a lot from the situation and from being a First Aid Group member. I will join more assemblies in the future. I am willing to be a paramedic in these assemblies again if necessary.”