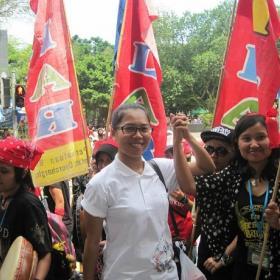 The young women of Cambodia stood in solidarity with women workers, particularly in the call for justice for the woman who died in a recent SL workers’ demonstration in Phnom Penh.

“The Cambodian Young Women’s Empowerment Network (CYWEN) and other young women’s groups released a statement condemning the death of the woman protester. We are also planning to participate in a radio talk show to raise awareness on this issue,” says Sophoan Chan of JASS Southeast Asia and chair of CYWEN.

Cambodian workers from the Singaporean-owned SL garment processing factory went on strike and gathered outside the SL garment factory on 12 November 2013. Factory owners of SL failed to pay its workers since August 2013. At least 600 mostly-women protesters staged a rally as local and international NGO workers joined to observe. One group walked along the Meanchey road and another group walked towards the Ministry of Labor. The first wave of violence broke out at the Stung Meanchey bridge in the capital’s Meanchey district.

“The Cambodian government should take urgent action to investigate the case of the woman who got killed in the protest rally. We demand no less than justice for her,” says Neang Sovatha, gender coordinator from the Cambodian Labour Confederation (CLC) who, along with young women’s groups such as CYWEN, joined the SL garment workers’ demonstration.

The garment industry is Cambodia’s largest income earner, representing more than 80 per cent of the country’s exports. Currently, the country has about 500 garment and footwear factories employing around a half million workers, majority of whom are women. Last year, the country exported garment products for Western clothing firms in equivalent to US $4.6 billion.

The garment worker’s life is very miserable. The government should take immediate action to improve the working conditions of Cambodian workers especially women workers — by increasing their wages, by ratifying the International Labour Organization Convention (ILOC) 183 on maternity protection, by strengthening law enforcement and by generally improving their working and living conditions. It’s sad to see this government striking down its own people,” states Neang Sovatha.

Currently, the minimum wage for a garment worker is US$ 80. Apart from low wages, garment workers in Cambodia face long shift hours with no workers’ benefits. Workers are always calling for better wages but both factory owners and government ignore their plight and barely address their demands.

The violent clash between the SL protesters and the police began when around 100 police blocked the protesters who tried to march from the SL Garment Processing factory to the home of Prime Minister Hun Sen. One woman was shot dead and nine other people were wounded allegedly by the Cambodian riot police shot; more than 40 protesters, including monks, were beaten and arrested.

Through this demonstration, the plight of Cambodian garment workers was put on the spotlight. Hopefully, women’s situation will improve, particularly women workers in the garments industry. Workers deserve increased wages and other benefits based on labor laws for all workers. Women will have stronger collective voice and power together,” concludes Neang Sovatha.