We, the Honduran Feminists in Resistance, are convinced that the restitution of democracy to Honduras does not mean only the return to government of President Zelaya – it must also signify respect for the Honduran people’s right to install a Constitutional National Assembly. Only in this way will it be possible to build a new social agreement that grounds the State once more in human rights and in the demands of the population. Only in this way will Honduran women see our rights fully recognized, sexist violence eradicated, and our participation in building a new society secured. The call for elections is merely a strategy to “return to normal” from political conflict, to end human rights violations, and to give us a choice between two conservative candidates who thus far did not even acknowledge that a coup had been staged. But we don’t want the old status quo; we don’t want to be “represented” by candidates loyal to the interests of the oligarchy and of the military that enacted this coup and that permit and promote extensive human rights violations. No! We go further: we demand justice, we demand punishment for those responsible for violating both the constitutional order and the dignity of the people of this country. 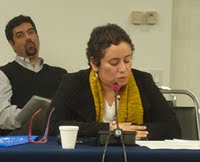 Jessica Sanchez will be appearing at Busboys & Poets (14th and V Streets, NW) in Washington, DC on Thursday, November 5, 2009 at 8pm with Bertha Oliva of Committee of Relatives of the Detained and Disappeared in Honduras (COFADEH). These prominent human rights advocates will speak about restoring democracy and human rights in Honduras.