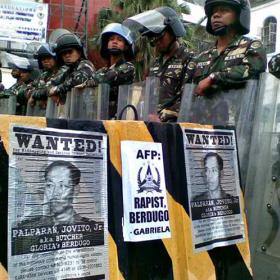 In Southeast Asia, there are civil wars going on. In fact, the region is touted as “home to the world’s longest ongoing civil wars.” Burma, Philippines, and south of Thailand – these are just few of the countries in the region with wars in progress.

Why do wars happen? War is about owning and controlling the natural and mineral resources of the region, as the Center for Women’s Resources (CWR) has stated in its international paper presentation on militarization in Southeast Asia (2008 and 2010). Aside from resource exploitation, it is also about political control. As the imperialist powers of the West are now in economic depression, they have an urgent need to gain hegemonic control in resource-rich Asia. Concurrently, national despotic governments welcome and encourage imperialist intervention because they are also gaining from it.

The real objective of economic plunder and political control has been guised as “war on terror”. Alarmingly, this has also labelled Southeast Asia as the second front of terror, thus legitimizing the intervention of imperialist troops in the region.

The ensuing deaths and displacements in conflict areas are inevitable. But over and above these casualties of war is another horrendous phenomenon: the use of rape as a tool of war.  According to a report published by the Nobel Women’s Initiative in 2011, sexual violence is widespread in armed conflicts around the world, and the perpetrators of these war crimes are benefitting from a culture of impunity.

In Southeast Asia, the perpetrators are almost always state agents – the military, the police, and the state’s auxiliary armed groups.

The terrorism scare has intensified the horror experienced by Southeast Asian women. As the CWR paper has stated, war has displayed the patriarchal modes of abuse like rape and other forms of sexual exploitation. Thus, with a patriarchal mindset of perpetrators, rape and other sexual abuses are used:

The Burma Army, for instance, has had a long record of appalling human rights abuses, especially in the conflict zones of ethnic states.

Moon Nay Li of the Kachin Women’s Association (KWA), who has documented gang rapes in Kachin State, highlighted that victims are as young as nine years old, and half of the victims in cases she documented in 2011 were killed after being raped. The rape of women, committed rampantly in and around Kachin State, is recognized as a “systemic and calculated war tactic” rather than a random act of violence.

“Not only is the government not protecting civilians or stopping the Burmese troops, Thein Sein and Aung Min are denying human rights abuses. Now that the fighting has increased, the government troops will use this pretext to continue raping, torturing and killing,” says Moon Nay Li in a 2011 news report.

In the Philippines, cases of sexual abuse against women and girls living in militarized areas are being committed by no less than Philippine military personnel. From 2010 to 2012, CWR has documented at least seven cases of abuse, ranging from sexual harassment, rape and gang rape by the Armed Forces of the Philippines’ (AFP’s) regular units and its paramilitary wing the Citizens Armed Forces Geographical Unit (CAFGU). Majority of the victims are minors.

The incidence of rape in the Philippines is indeed alarming. But this situation is being exacerbated when the supposed protector of human rights — the state machinery such as the military, police and its auxiliary armed groups, is directly involved as perpetrators,” says an excerpt from a statement released by GABRIELA, a national alliance of grassroots organizations in the Philippines.

To quote Jojo Guan, CWR’s executive director, in the paper “Militarization in Southeast Asia: The Myth of Terrorism, the Reality of Resource Wars”:

Southeast Asian Women have experienced different abuses such as rape, forced prostitution, sex trafficking, and health-related threats. Women are considered as ‘spoils of war’ and rape is seen as inevitable, though unfortunate, by-products of armed conflict. Rape is systematically used for various purposes including intimidation, humiliation, political terror, extracting information, rewarding of soldiers, and “ethnic cleansing”. Those who are raped or sexually abused can hardly find a support system for counselling and processing of their traumatic experience.”

In the two countries mentioned, sustained efforts to assist and give justice to the women victims are ongoing. In Burma, the Kachin Women’s Association has been documenting the sexual violence that is happening in the Kachin conflict areas. It has also been active in condemning the Burma Army and releasing its findings and statements in the international community. In the Philippines, some of the victims are given psycho-social counselling by psychologists of GABRIELA. Local and international campaigns led by GABRIELA, with a call to criminalize the perpetrators, are also ongoing. Petition letters and solidarity statements are part of this campaign.

The most recent One Day, One Voice (ODOV) regional campaign of JASS Southeast Asia carried “ending rape as a tool of war” as one of the calls of the JASS network in the Philippines. “One Fight, One Voice: Women, Assert Your Rights” was the overarching theme of the ODOV and JASS network in the Philippines’ December 2012 photo opportunity activity was one among the string of activities in commemoration of the global 16 Days of Activism to End Violence against Women.

“With JASS’ responsive regional and international structure and processes, local-to-global solidarity and action which place frontline activists and agendas at the heart of our social justice work, crusade against rape, initiated by our JASS partners in Southeast Asia, is definitely one campaign that we will focus on in the future,” says Nani Zulminarni, JASS Southeast Asia’s regional director.

Beyond the call to criminalize the state agents involved is the wider call to stop the broader state strategy of militarization of communities that make women easy targets of sexual violence.

The campaigns launched by different Southeast Asian women’s groups are just the beginning. Their message will resonate in the days to come: women’s bodies are NOT war booties!