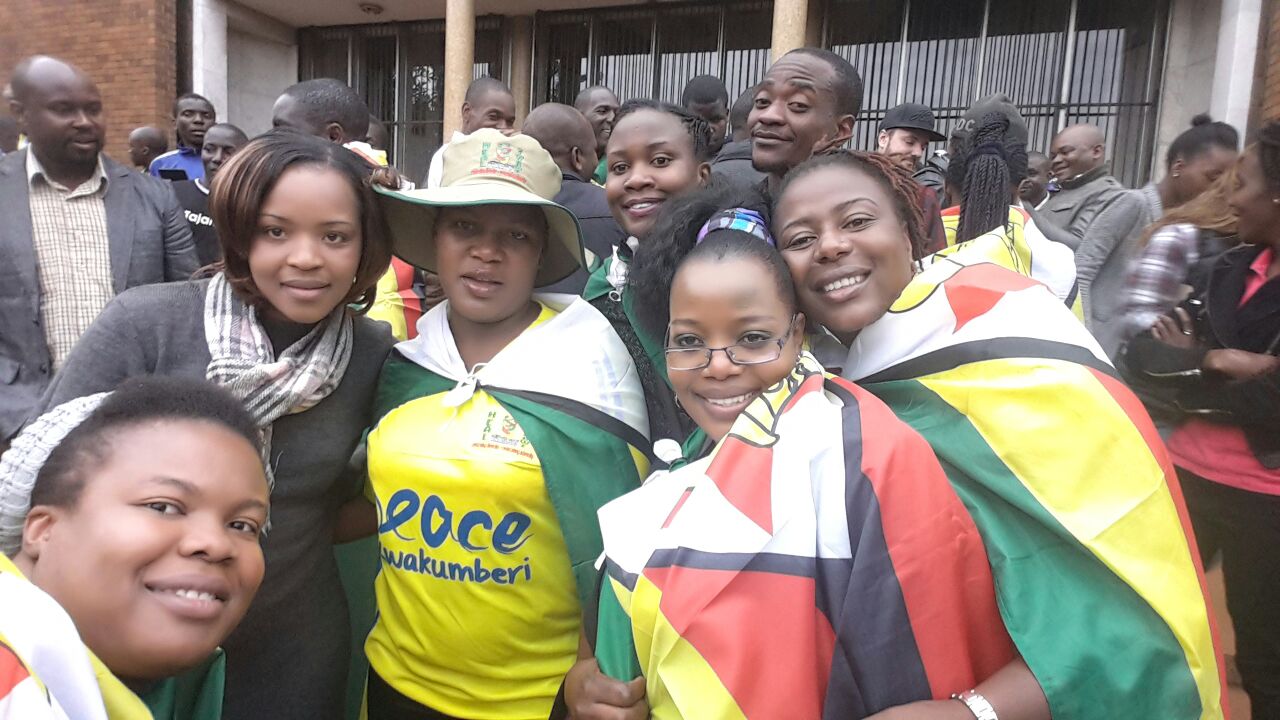 This was the call to action on June 13 as hundreds of Zimbabweans converged in the nation’s capital at the Harare Magistrates Court to support the release of Pastor Evans Mawarire who had been charged for “inciting” violence through what we have now come to know as the #ThisFlag campaign. Among those leading this rallying call was 31-year-old political activist and student, Maureen Kademaunga. Maureen is one of the many Zimbabwean women who have been vocal about the impacts of the ongoing economic instability in Zimbabwe. She stood and negotiated with the police, calling them to action every 30 minutes to give an update on what was taking place in the court room. Holding their Zimbabwean flags, women and men from all walks of life sang, danced and prayed into the night as they waited to hear the verdict. Around 8pm, the charges against Pastor Mawarire were dismissed.

How did we get to this moment of frustration and hope? Let’s rewind.

Zimbabwe is on its Knees

“We find ourselves in a crisis. There are no jobs. There is no cash. Basically everything is a problem.” – Mai Sputi

Mai Sputi’s sentiment is shared by many and protest movements such as #ThisFlag, #Tajamuka, #OccupyAfricaUnitySquare, and #beatthepot have emerged because citizens have had enough.

Over the past 20 years, Zimbabwe has been experiencing political and economic upheaval. These include: a deteriorating health system, corrupt government officials, a decaying educational system, lack of revenue to pay civil servants, increased militarization, introduction of statutory instruments banning the import of certain goods perceived as locally produced, regardless of a defunct manufacturing sector. More recently, due to looming cash shortages—now a daily reality—the Reserve Bank Governor announced the introduction of bond notes, legal tender that can only be used in Zimbabwe.

Women are Bearing the Brunt

“We are hungry and we need food,” has become a mantra that is chanted every day in Zimbabwe. Women are among the most affected, but due to different socio-economic backgrounds, the brunt is experienced differently. For example, the cash crisis has seen escalated violence among sex workers and between sex workers and their clients. “Sister Winnet, I am so desperate, these days I am accepting clients who pay even if they refuse to put on a condom,” expressed Jane*

Women who survive through cross-border trading have also been affected by the introduction of the importation ban. This ban. which was introduced using statutory instrument number 64 of 2016, prohibits the importation of specific basic commodities such as food (cereals, baked beans, peanut butter etc.) without licenses. Mai Nzuma a cross-border trader lamented, “women are the ones who are mostly affected by the ban on importation of goods. Most women who are widows, single parents and married have been sustaining their families using proceeds from cross-border trading, but now how [will we] sustain [our] families?”

Women are also part of the Struggle

Women are adding their voices to the different campaigns and protests that have erupted throughout Zimbabwe in many ways, including on social media.

Linda Masarira, a single mother of five who is currently awaiting trial, is one of the few people who occupied Africa Unity Square in Harare for 16 days, demanding for the government to step down and address the issues affecting the nation.

Lawyers such as Fadzayi Mahere and Lucy Chivasa have been offering their personal time by writing on the legality of some of the issues affecting Zimbabwe, such as the call to introduce bond notes.

More recently women gathered to show their frustration through beating pots – a symbol of the hunger facing the nation. The #beatthepots protest which was held in Zimbabwe’s 2nd largest city, Bulawayo has received its fair share of backlash for reinforcing stereotypes about women and their place in the home, particularly their role in cooking and taking care of the family.

However, it is critical to honor and celebrate the many women who have been speaking out, taking a stand and equally putting their lives and those of their loved ones at risk in the process.

In the wake of the protest movements in Zimbabwe, the question that many keep asking is, now what? In one of her Facebook posts, Advocate Fadzayi Mahere notes that the even if the #ThisFlag movement does not culminate into anything more, it has managed to shift citizen apathy. Citizens in Zimbabwe are speaking, they have realized the power they have—power to voice and challenge. And that is important.

For feminist activist Rudo Chigudu, while the different protest movements have opened up space to break citizen apathy, they are also problematic. For example, the very foundation of #ThisFlag which is the national flag is a symbol of nationalism and nationalism is one of the greatest sites of patriarchy, misogyny and sexism. “…When we look at the #ThisFlag campaign for example, the national flag is our rallying point, we are all seen as equal citizens of this country, however, women and men are expected to uphold national norms that are very gendered. In a nationalist discourse, women are seen as child bearers and uphold a certain moral standard, while men are expected to be strong and take leadership. I am therefore concerned about how the #ThisFlag movement reflects the needs of women and many other marginalized groups of people” explains Rudo.

Having spoken to many women and also through following social media updates by various women, Rudo’s analysis left me thinking about this moment. Like many other Zimbabweans, I got caught up in the frenzy of the moment, the power I had to voice issues from my perspective, but I am left with a deep desire to stir conversation and thinking that allows for a movement that addresses my needs as a woman, and the needs of many other marginalized groups. And more importantly, a movement that challenges power and questions the many systems of oppression.

*Jane not her real name. Real name concealed for her privacy.

This blog was written by Winnet Shamuyarira