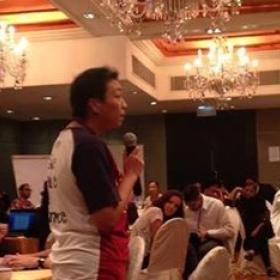 November 20, 2013 — I will be traveling to Bangkok with hesitation. I had an email from Bytes for All, inviting me to represent JASS Southeast Asia about a discussion on the freedom of expression in the internet.

In preparation, I did a lot of reading. I was worried that during the forum, I might not be able to give an opinion that supports women. A few days earlier, I also had an extensive discussion with Niken Lestari, national coordinator of Forum Aktivis Perempuan Muda (FAMM or Young Indonesian Women Activists’ Forum) as she recently took part in the Internet Governance Forum (IGF) in Bali, Indonesia. There she also met Association for Progressive Communications’ (APC’s) Chat Garcia Ramilo who kept urging colleagues from Forum Asia and Bytes For All to include women in the meeting.

When in Bangkok, it turned out my name was not in the guest list. I panicked. At that time, all the Bangkok hotels were packed because Bangkok was hosting a lot of fora so it will be very difficult to get a room if one was not registered. Fortunately, some friends from the committee swiftly helped me and I was able to get a room at a nearby hotel. From an Asian Forum committee sharing, I became aware that this event was an effort to give our input to Frank La Rue, UN Special Rapporteur on freedom of expression, regarding the threats and challenges on the freedom of expression in the internet and how it is linked to the political situation in each country.

Participants from Myanmar, India, Pakistan, Indonesia, Malaysia, Mongolia, Bangladesh, Afghanistan, Nepal, Singapore, Cambodia, Philippines, Timor L’este, Laos, Vietnam, Maldives, Sri Lanka, South Korea, and Japan provided a report on their respective countries’ situation. Observers from the US, Norway and Sweden were also present. The forum was also an effort to develop an Asia-wide civil society movement for the protection of freedom of expression on the Internet.

I saw the common problems faced by every country in area of freedom of expression in the Southeast Asian region. Indonesia is a country that has its Information and Electronic Transaction Act, a law that can charge defamation to its citizens and this law is also often used to restrict freedom of expression. In countries such as Vietnam, Cambodia and Myanmar — in the absence of protection of the rights of speech and expression — journalists and bloggers can be arrested for writing materials considered as “threatening” by the state.

In terms of protection for women in the media, I asked everyone to consider how they would present their public statement especially where women victims of sexual violence is concerned. I was so pleased when my question was answered a few days later by the chair of the Association of Independent Journalists (AJI).  AJI made a statement in the media to observe the code of conduct, i.e. in order not to reveal the identity of attacked victims, especially victims of sexual violence.

Women must claim their space in the virtual world and immediately deepen their knowledge of technology and the digital world to protect themselves from a variety of cyber crimes that deliberately target women. Safe surfing in the internet needs to be on the agenda of women’s education in order to curb the growing internet “insecurity”.  Anonymity in cyberspace is often misused and abused by some unscrupulous groups to lure and trap women into trafficking, prostitution and various other crimes such as fraud with seduction.

On the last day, we discussed various controls by the state through Facebook, Twitter and other social media and how surveillance limits the freedom of expression in various countries. In the virtual world, monitoring is also done covertly. In some of these cases, bloggers and journalists become the biggest victims and so need protection.

One of the concrete things that can be done is to prepare for the ASEAN Youth Forum and the ASEAN People ‘s Forum (APF) and include in these meetings the demand for the provision of protection for the public, bloggers, and journalists in order not to lose freedom of expression, particularly in the internet.

The forum concluded in a group photo. I had to immediately go back to Indonesia to prepare for the One Day, One Voice campaign in my area – in Surabaya, Indonesia. One thing that struck me in this conference is that women’s voices have been delivered. Indeed women do have a number of vulnerabilities in the internet but women must continually seize the space and make their voices heard! 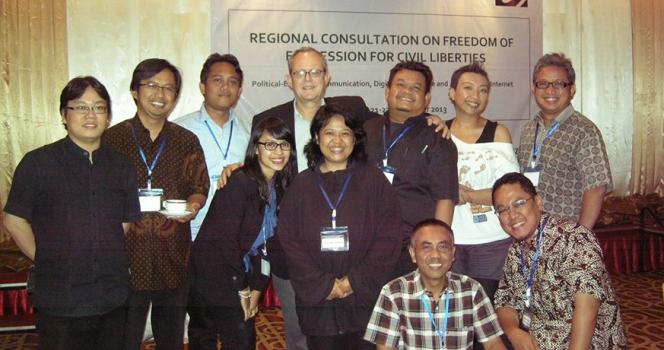 Maria Mustika represented JASS Southeast Asia in the Conference on Freedom of Expression for Civil Liberties held in Bangkok, Thailand on November 21-23, 2013.