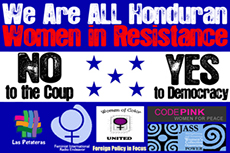 July 21, 2009 – In a show of solidarity, women throughout the Americas are mobilizing to pressure the US government and international organizations to take a stronger stand against the June 28 coup in Honduras. Rallies will take place Wednesday July 22, in at least 10 cities including Tegucigalpa, Honduras, San Jose, Costa Rica, Mexico City, and Washington, DC.

The Washington, DC rally begins at 10am ET in front of the White House, and is jointly organized by JASS, CODEPINK, the Global Fund for Women, and Women of Color United – all national and international feminist organizations, along with DC-based, Hondurans for Democracy, and others.

Responding to a call to action from Honduran Feminists in Resistance, women will be speaking with one voice: – “No to the coup, no to violence, yes to democracy, yes to rule of law.”

Global Fund for Women, CEO Kavita Ramdas, notes that while coup supporters claim legitimacy for their actions, facts on the ground show otherwise. “ Civil society organizations have documented repeated violations of human rights, including the violent suppression of civilian demonstrations, military attacks on communities and detentions. This is not democracy.”

Though leaders throughout the world have expressed concern, women’s groups feel governments could be doing much more.

“We are asking feminists, as people who uphold the country’s democracy, to demand that their governments not recognize the illegitimate government. This is not about support for or against Mel [Zelaya]. We are against military coups, and…against the religious right who have enthroned themselves in this de facto government and who have taken measures in Congress against the most basic rights of women.” said Gilda Rivera, Center for Women’s Rights in Honduras, one of the organizers spearheading the rallies.

Medea Benjamin of CODEPINK, who recently returned from a mission to Honduras, said, “The women I met with in the marches are determined not only to get back the President they elected but also to amend the constitution to protect women’s rights.”

The rallies support the key demands of the Honduran Feminists in Resistance which include:

“Democracy is a global feminist and a woman’s agenda. For women in the Americas, democracy is a life and death issue as they struggle against impunity, the dismantling of secular states, and unchecked violence. Giving a pass to the coup and its leaders sends a message to the powerful interests operating behind the scenes throughout the region that an overthrow is an acceptable political move.” says Lisa Veneklasen, Director of JASS, Washington, DC.