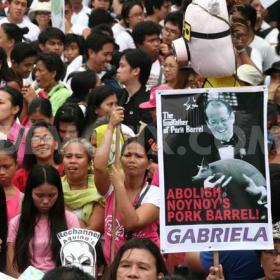 When Philippine President Benigno Aquino came into power in 2010, his electoral platform focused on eradicating graft and corruption in government voiced out in his “righteous road” speech. Now, apart from the recent “pork barrel” controversy, numerous allegations of graft and corruption involving his relatives, cabinet members, and political allies are widespread. As many people now perceive, Aquino’s promises of “righteous road” to reforms is not so righteous after all, but mere rhetoric.

Corruption is everywhere in Philippine government. From the village levels up to the national level, it is so widespread. In 2007, the country was named as the most corrupt nation in Asia. The Philippines consistently ranked high in corruption perception index globally up to this time. Every Filipino knows that most Filipino politicians are corrupt. Means of corruption include graft, bribery, embezzlement, backdoor deals, nepotism, and patronage. Indeed, running the government like a business has become the norm. When you have big landowners and big businessmen who are, at the same time, your government officials – you have a deadly combination. The profiteering using public funds that ensue from this arrangement is always done at the expense of the people.

But just because it’s common doesn’t mean Filipinos think it is alright.

Recently, a government audit report revealed about how government funds were allegedly diverted into private hands. It roused anger among a wide spectrum of groups in the country. The public’s anger was primarily focused on the country’s “Priority Development Assistance Fund” (PDAF), also known as “pork barrel” which contains money that lawmakers can spend on their own development projects. The “pork barrel” as a system is defined as a government project or appropriation that yields jobs or services or other benefits to a specific locale and patronage opportunities to its political representative. Simply put, it is the legislative control of local appropriation.

In spite of the people’s urgent pleas, Aquino insists on maintaining his own pork barrel that is estimated at more than a trillion pesos. Likewise, Aquino’s special accommodation of Janet Lim-Napoles, widely believed to be one of the congressmen and senators’ “co-conspirators” in corruption, has also fuelled the people’s fury.

That is why on August 26, as the Philippines celebrated its National Heroes Day, I joined the hundred thousand people in Rizal Park (Luneta Park) primarily to express my opposition to corruption through the Million People March. I stand with the Filipino people in stating that:

Women are at the receiving end of the effects of corruption, as they are usually the ones who are traditionally expected to budget the family’s meager income and to make ends meet for the family.

Billions of pesos of the people’s money are lost to corruption annually in the Philippines and this translates to the absence or the lack of basic services for the poor. Concretely, for women, this means substandard health services, exorbitant tuition fee increases, and more housing demolitions to give way to businesses. Money that could have been allotted for social services for women and for the general public is pocketed by corrupt government officials.

Some say it takes a lot to sustain this movement against corruption. The government of Aquino hopes that the reaction of the Filipino people is just ningas-kugon, or the Filipino trait which means it is only good at the start but then it dies down quickly. Simply put, a flash-in-the-pan or a spasmodic action.

I say the people have had enough of corruption. I joined the Million People March last week; I will join more marches in succeeding weeks – until the “pork barrel” system – now the emblem of government corruption – is scrapped.