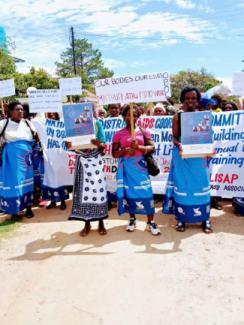 A few weeks ago, chief opposition leader, Lazarus Chakwera was appointed as the new president of Malawi, generating new expectations and renewed hope. Following the election, we asked our allies to reflect on the significance of this victory for the future of Malawi. “The new government provides many Malawians with hope for a changed Malawi. A people-centered government which is transparent and accountable and provides people’s basic needs,” said Grace Jere. They welcome this new chapter but understand that it is only one moment in a much longer struggle.

The stakes are high for the new government. One of the world’s poorest countries, some of Malawi’s problems include widespread corruption that Madalitso Mwenda describes as a ‘pandemic’, violence against women and delivery on basic services. “The expectations to rebuild our broken systems are high more because of the serious breakdown in leadership the country has been exposed to in recent years,” says Martha Kwataine. The healthcare system is among the most broken and neglected as Madalitso Mwenda articulates, “The transition offers hope in all sectors of development but especially the health sector given the poor governance that has plagued the sector. It is a great moment to address the loopholes that have gone unattended for a long time.”

Last week, President Chakwera announced his new cabinet to the dismay of many women and gender advocates. He omitted the Ministry of Gender from the ministerial list and appointed only 12 female ministers, shy of the ratio enshrined in the law. “This has been done contrary to section 11 of the GEA [Gender Equality Act] which provides for a 40/60 ratio... One of the reasons the majority of Malawians voted for change was so we can have a fresh start, a new beginning, which among other things includes adhering to the laws that have been put in place as a country to govern us all,” expressed women and gender advocates in a public statement.

While increasing women in parliament is critical, simply having more women does not translate into a strong feminist agenda or meaningful change. As JASS ED Shereen Essof argues, “Confronting power is central to feminist leadership and movement-building. If we as women leaders replicate the practice of power over, how are we any different from mainstream male-stream practices of leadership?” Nevertheless, Malawi’s democratic breakthrough still provides a new opportunity to disrupt the status quo and implement change that better serves all Malawians. As Grace Jere says, “For women and girls who make up over half of the population and who unfortunately make up the majority of those living in poverty and are discriminated against at almost all levels, this change brings a lot of hope. There is now hope for women and girls to sit at the table and decide on issues affecting them, including access to quality education and healthcare. However, time will tell whether these promises shall manifest practically.”

Since 2007, JASS has supported women living with HIV to improve access to ARVs (antiretrovirals) and quality healthcare through a campaign, Our Bodies, Our Lives (OBOL). OBOL, now an 8,000-strong movement led and mobilized by HIV+ positive women (most living in rural areas), is transforming public health responses to HIV in Malawi. OBOL women recognize that lasting change needs both sustained organizing to shift social attitudes that reinforce stigma and discrimination, while also pressuring governments to enforce laws and policies that affect their lives. It is this approach that has enabled OBOL women, despite being marginalized, to see their daily life experience as the expertise most needed by policymakers to create sustainable solutions.

As we move forward, it is critical to continue to create space for information sharing, learning and participation to shape the change agenda at village, district, regional and national level. This continuous engagement to build collective power and drive an advocacy agenda will hold power holders to account and allow for women in communities to have a voice in shaping the future of Malawi.

***Madalitso Mwenda is an Information and Documentation Officer for the Center for Human Rights and Rehabilitation; Martha Kwataine has worked for over 10 years as a policy analyst and advocate/lobbyist with various organisations including Action Aid, Malawi Economic Justice Network, Baobab Health Trust, and the Malawi Health Equity Network; Grace Jere is a human rights lawyer, working with the Human Rights Commission in Malawi as a Principal Gender and Women’s Rights Officer.