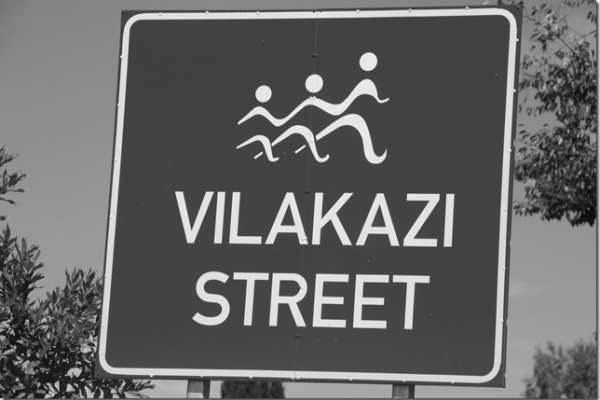 The winter sun bathes the gently curving road, the street, the people, the commuters and the face-brick houses.  In that instant, the narrow road we have been walking upon suddenly appears welcoming and prosperous.

However, this was not always the case in Vilakazi Street, Orlando West. Today, Vilakazi Street, without a doubt the most famous street in Soweto, is where two Nobel Prize winners, Archbishop Desmond Tutu and former president Nelson Mandela once lived. It has been made more accessible for the busloads of tourists that arrive here every day to pay homage to two of the world’s great peacemakers. One can visit the Mandela family house, now a museum.  As I stand at the top of the tree lined street it has clearly been widened and paved to make it more pedestrian-friendly, the trees adding some shade from the sun. Eight statues spelling out the word Vilakazi in sign language greet visitors. There are information plaques telling how the street got its name.  Vendors sell curios. Buskers perform the minute they see someone vaguely resembling a tourist.  Intricate mosaics add color and vibrancy to the pavements, where street side restaurants and café’s entice foreign money.

Vilakazi Street is also within walking distance of the Hector Pieterson Memorial Museum and is home to one the most famous schools in Soweto, Orlando West High School.  On 16 June, 1976, the street became a war zone when police opened fire on about 15 000 pupils demonstrating against Bantu education. In a day of violence, 23 people – including 13-year-old Hector Peterson – were killed and 219 injured. The violence sparked a popular uprising that eventually became known as the “Soweto Riots” which changed the face of the liberation struggle in South Africa.

JASS Southern Africa contributed as guest facilitators at the Fahamu (Pan African Network for Social Justice) Movement Building Bootcamp which took place in late July 2013 in Johannesburg, South Africa.  The bootcamp brought together a small group of activists from across the continent to deepen their thinking on movement building. As part of the process, participants visited with the Gauteng Residents Association (GRA) in Soweto an affiliate of the Anti-Privatization Forum (APF) which works to unite struggles against privatization in the workplace and community, linking workers’ struggles for a living wage and jobs with community struggles for housing, water, electricity, fair rates and taxes.

During the bootcamp, we spent a few days grappling with the ins and outs of a system intent on commodification and outsourcing, keeping the poor poor and lining the pockets of the rich. In light of this, the walk up Vilakazi is that much more striking.

Vilakazi Street is the most visible and visceral site of struggle commodified.  The roads are well-tarred and the pavements paved and lit, with benches to sit on.  The ANC flags flap in the winter breeze.  At every landmark the participants of the bootcamp try to gain entry, but there is an entry fee, often too steep for activist pockets.   As we walk down the street, I am reminded of the conversation we have just had with the members of the GRA – that within this community there are women who struggle to access decent housing, water, electricity, grants.  None of the markers of these struggles are visible on the road we walk along.   Looking around, one would think that everyone has good housing, affordable electricity and water.  People seem to be happily getting on with the business of life.

As we walk down this long road, from landmark to landmark I am reminded of the ways in which women mobilized for freedom, for national liberation and the struggle to overthrow the mantle of patriarchy.  One of the most visible markers was the 20 000-strong women’s march to the union buildings in 1956 to protest against the proposed amendments to the Urban Areas Act (commonly known as the pass laws) of 1950.

After liberation, this movement secured many gains but these brought challenges.  Now almost twenty years after liberation, many women anti-apartheid activists have moved into state structures, business, and non-governmental organizations (NGOs), thus growing the number of women in decision-making positions. But a Constitution that guarantees equal rights and women in political leadership does not add up to a society where real liberation for women has been achieved and the goal of a non-sexist society remains in the distance.  The women in the GRA remind us of this.  Vilakazi Street makes it all the more surreal.

The truth is that in South Africa, like in many countries in the region, in the absence of a strong women’s movement, the challenge becomes one of going back to the basics, grappling with ways and means of doing the community consciousness raising and mobilizing that require creating the spaces for women to come together on their own terms to build the analysis and strategies for women’s emancipation from their lived experiences of oppression however it may manifest and realize the dream of alternative worlds in which sexism and all forms of oppression are dismantled.

In a 1989 issue of AGENDA, Jacklyn Cock identified the challenge facing the South African women’s movement as ‘widening and extending the space for feminist activism’. In 2013 the challenge is no different.  Having a language with which to speak about the betrayals and the violations of the present is one step that the women in Gauteng Residents Association have taken towards their liberation,  the second, working class women coming together to organize in small ways around the big things that allow us to be more human.    In this way, South African women can once again express the resolve with which their grandmothers marched: ‘You have struck a woman, you have struck a rock.’