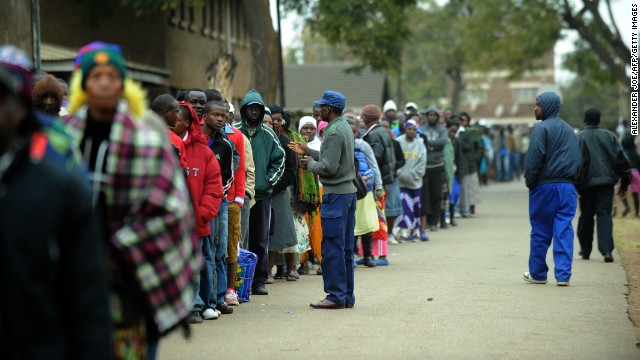 “They’re already neck-and-neck, heading for a run-off!” That’s a running joke on the streets of Harare as we wait for July 31, the day of Zimbabwe’s national elections.

Walking through the city’s streets, standing in shopping queues at the supermarket, waiting in line at the petrol station, even just stepping into the arrivals area at the airport, you can sense the tension in the air. There is the feeling that people are waiting for something to happen. It’s a strange mix of cynicism and fear for what will come after Wednesday’s vote. One young man quipped with an easy grin, “Well, we already know that the MDC-T (Movement for Democratic Change – Tsvangirai) are going to win – after all, they won last time. But that didn’t matter then and it probably won’t matter now.” If people aren’t sure that the ballot bins are being stuffed as we speak, they are pretty sure that whatever the count will be, the results will be contentious.

As with all situations of instability, rumors and misinformation abound. Everything from the absurd to the chillingly accurate to religious zealotry.  T.B. Joshua, a continentally-renowned prophet and mega-church leader made a prediction: a country somewhere in Africa will have elections, the results will be read out after eight days and within that week at least 3000 people will be killed in post-election violence. This number varies from anywhere between 3000 and 30, 000 depending on whom you speak to. And the prophet has since denied ever making that proclamation in the first place. Facebook personality, Baba Jukwa, a party insider who thrives on spilling high-security secrets of MPs and ministers (no one’s quite sure to which party he belongs) is telling everyone to watch out, violence is coming and intimidation at voting stations is rife. He has also claimed that MDC-T leader, Morgan Tsvangirai will win by 61% and dishes out safety tips for citizens during the harmonized elections on his Facebook page. ECONET, the country’s largest cell provider has shut down bulk SMS services, making it harder to warn large numbers of people if violence does escalate.

We don’t know what will happen or who will win, and how people would react. It could be ZANU PF winning and people taking to the streets and saying, ‘This is not what we want.’ Or it could be the other way round, and people will no longer accept defeat. I think whichever way the vote goes, there could be violence after the election. ~ Winnet Shamuyarira

No one knows much of anything right now – how these elections will pan out, who will win, what the aftermath will be in the immediate and the longterm, whether there will be violence or not. But we remember what it was like five years ago, we remember the hospital wards full of tortured people, their backs and buttocks bloody and bruised. We remember the women who were raped and violated, many of whom have not had the support systems to speak out. We remember the people who were evicted from their homes, harassed and abused.

How people are feeling…

Some citizens are excited:

I’m very excited because I managed to register at the last minute, the night of the deadline. I think Zimbabweans had become more and more apathetic but things have happened in the course of the last few years with the unity government that have restored people’s hope. That ZANU can negotiate with people from different parties. I think many feel that this time around, it’s for citizens to participate in national processes. ~ Talent Jumo

And others are juggling feelings of apathy and realistic scepticism with hopefulness:

I feel that when we heard elections were coming, people were prepared for the worst [of violence]. But the worst hasn’t come. So people are a little bit freer, they’re campaigning, they’re on the streets wearing their red MDC t-shirts, going to rallies and doing what they can – which is different from 2008 in some ways. But we have to remember that this is also Harare which has always been an MDC stronghold. It may be different for many in the rural areas. We’ve heard that people are being ‘forced’ to go and vote, and that they should ‘know where to put their vote.’ There’s intimidation, some people being told there are cameras in the voting booth so they should ‘watch out.’ But I think, personally, the people of Zimbabwe know what they want. Those who want to vote for ZANU will vote for ZANU and those who want to vote for MDC, will do that. ~ Winnet Shamuyarira

At the end of the day, what are the choices?

On Zimbabwe’s local news at 8PM every day, the plot unfolds like a very dark comedy. Each report of pre-election campaigning has shown very brief, uninspired clips of MDC-T rallies, sparsely populated, Morgan Tsvangirai sitting idly on a sofa decked out in bright red colors. The sound on these reports is often magically faulty, so we can’t hear anything of the singing or hear any campaign messages to rouse the viewer. I went by an MDC rally yesterday, at Harare’s Freedom Square and there were hundreds of people, a sea of red, all singing and dancing and shouting in support of Morgan Tsvangirai. You would never know that by watching the news.

By contrast, the news features on Robert Mugabe and the ZANU PF campaign are lengthy and thorough. We see long reels of Mugabe and party faithful speaking about the “traitors” who have betrayed the country and sold it to the dogs, all of them dressed in the garish yellow and green campaign-wear, with crowds and crowds of people bloating stadium stands.

However, perhaps the real question when Zimbabweans stare down at that ballot paper is what kind of choices do we have at all in a context where there are no truly meaningful alternatives? While MDC is campaigning on their “change” slogan, not everyone has faith that Morgan Tsvangirai and his party represent change for all Zimbabweans—not change for the better at least. But the alternative is a party and a man that represent 33 years many of us would rather forget even with the positives we can still retain from that time period.

I guess we’ll have to see.