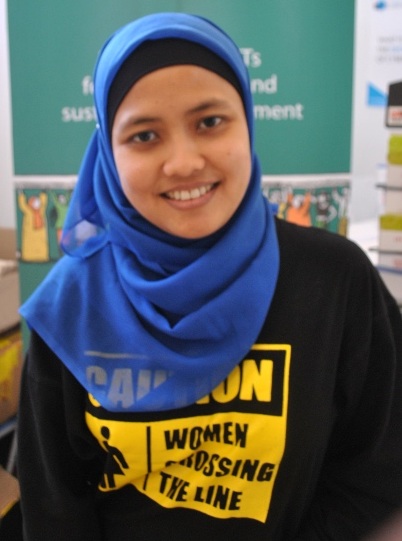 The first time I got my hand on computer, I wasn’t scared at all. Maybe it’s because as a 16-year-old, I was anxious to try something new. My parents encouraged me into “techie” stuff because in big cities, one cannot survive without “upgrading” one’s skills. Having computer skills is one of them. But today I realize having computer skills is not enough!

I opened my first email account in 1997 using yahoo.com and I still use it for old time’s sake. I like the username I made that year— forevernikn. I felt then that there was a lot of catching up with my friends that I had to do. My friends and I created email accounts using several email providers just for fun and for practicing our internet skills.

I wondered back then why they would provide a service for free. Who pays for my email account? Why should I need a password to turn my computer on or to log on to my email account? Then I thought my email was like a locker where I am the only one who can access it because I have the key. I simply took what was offered virtually.  I thought back then, why bother?

Those were the days when consumers were passive and ignorant. I am now among billions of internet users. On the internet, there are many products, brands, services that try to “lure” me in. If I were an “internet-hungry”13-year-old kid without any digital literacy, I would “eat” everything up. The experiences of having many unused emails, outdated homepages, unread articles, unknown friends and falling in love with text messages sent by @lonelyguy via messenger taught me a lot. One is that I have to know my information needs. I also have to read the terms of my relationship with whatever available services are out there. In short, I need to learn the “game”.

I used to work for Combine Resource Institution until 2007. Its tagline was “Building a Community-Based Information Network” by using community radios to spread their message. Since 2002, they have been using radio as part of community empowerment. At that time, “citizen journalism” was trending. For one or two years, CRI has been gathering people and feeding content to their website on disaster mitigation. During my stint at the CRI, I also helped to organize a Freedom of Expression conference with support from Ford Foundation in Solo, Indonesia in 2007. However, I didn’t get involved in the discussion because back then, it was “too grand” for me and I was simply part of the events organizers’ team.

Lately, there has been growing internet activism in Indonesia in the form of gathering voices or support to different issues. Activists are now learning that multimedia convergence is inevitable because people are spread across different social media. The combination of “offline” and “online” activism is also important because there is growing skepticism on “online activists” or those who are perceived as working without a strong community organizing framework.

Recently, there were pilot projects supported by UN Development Programme (UNDP) and Mastel in the form of “telecenters” (or telecommunication centers) in remote areas. They learned that providing computers, internet connection and seed money without community organizers to help “empower” the communities were failure. Some telecenters were abandoned after the project finished. The World Bank learned well and when they developed a similar telecenter program, they partnered with Puskowanjati or Center of Woman Cooperative in East Java.

I am now learning to consume ICT according to my needs by becoming less fanatic about brands, understanding worker’s rights behind all products, combining many tools to serve my work while looking for alternatives. But of course, “my need” is a battle ground often defined by industry and government law. I learned from JASS that leadership takes many forms. One of them is the confidence that each and every one of us is a “knowledge spring”. We inherit and enrich our own knowledge to be passed on to the next generation; watering the soil to make the ground fertile.

It is important to raise awareness among women that the use of the internet is beyond being a consumer or a user. This awareness is a powerful tool we need before we go face-to-face with a jumble of knowledge from other cultures and languages in a world we call the internet.