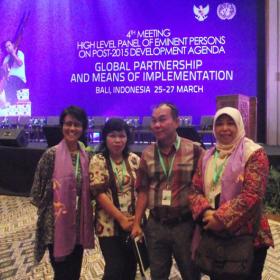 “Our lives are not dependent on our governments. Many governments actually fail to do their duty. They just leave the women and the people to struggle alone,” says Dina Lumbantobing of JASS Southeast Asia.

In 2000, world leaders came together to adopt the United Nations Millennium Declaration, with nations “committing to a new global partnership to reduce extreme poverty and setting out a series of time-bound targets – with a deadline of 2015.” These are known as the millennium development goals (MDGs) – key themes of which include: eradicating extreme poverty and hunger, achieving universal primary education, promoting gender equality and empowering women.

For the past 13 years, most Asian governments boast of significant improvements especially in poverty reduction. But recent estimates peg that of those people living below the poverty line, 950 million are in Asia-Pacific. In addition, almost sixty-five percent or 518 million of the world’s adult illiterates reside in the Asia-Pacific region, according to the 2012 Education for All (EFA) Global Monitoring Report. As for gender parity in education, 68 countries still have not achieved gender parity in primary education, and girls are disadvantaged in sixty of them.

What should have been a genuine interest and commitment to achieve these MDG goals has become mere lip service and application of mechanical approaches and solutions. Though not explicitly declared in the forum, the “globalization” framework or the “neoliberal paradigm” is a failure.

Civil society organizations (CSOs) from the Asia-Pacific increasingly demand not just consultation, but a more meaningful participation in the crafting of a global development agenda. CSOs’ call is to be “engaged as an equal partner in all political processes to co-determine a bold, transformative and people-centred framework.” In the Global CSO event, women’s presence was markedly very strong. Sealing women’s voices was the drafting and release of a Women’s Caucus statement which registered women’s demands for a more equitable, just, gender-fair and inclusive development framework post-2015.

One of JASS Southeast Asia’s pillars, Dina Lumbantobing, took part in the drafting of the statement as she participated in the global dialogue on behalf of the Executive Council of the Asia South Pacific Association for Basic and Adult Education (ASPBAE).

The Women’s Caucus’ statement can be used by women everywhere, especially for Southeast Asia, as reference to demand for the new paradigm post-2015. This event can contribute to the improvement of women’s condition in the region.  But although Southeast Asian women can use these platforms and agreements to our advantage, these are not enough. We have two more years to go before 2015 and many things can happen. We all know the ‘clever style’ of rich countries to avoid their promises,” says Dina Lumbantobing.

While there have been some steps forward to meet some of the MDG targets and to spur efforts to focus on poverty reduction, undeniably, significant work remains to be done.

According to estimates, half of the world’s population lives on less than US$2.50 per day, and nearly one in seven people live in hunger while one in five suffer from obesity. The wealthiest 20 per cent of the world enjoy more than 80 per cent of total world’s wealth, while the bottom 20 per cent share only 1 per cent.

“We can definitely learn from the statements and also from other sources on the failure of MDGs and other target such as Education for All, to be more focused on the importance of gender perspectives, education and lifelong learning, especially for women,” adds Dina.

The current development model, which gives corporations control over our natural wealth, water and resources, as well as technology and intellectual property, while depriving women of land and food sovereignty, undermines gender equality, sends communities into conflict with governments, increases militarization, and women’s vulnerability to violence and economic shock. This must change.

The new development framework must recognise that patriarchal systems and practices are a major impediment for development. Ending violence against women and girls and promoting democratic empowerment and leadership of women at home, in the community, nationally and internationally is a fundamental prerequisite for women’s rights enjoyment, gender equality, sustainable development and genuine democracy.”

This is where JASS, as a force that drives feminist organizing efforts in the region, play a crucial role.  No matter how effective or ineffective women are at influencing our governments to adopt more people-centred policies, of greater magnitude is the strength of women’s and people’s voices. Apart from amplifying women’s voices, JASS can also play an instrumental role in knowledge building especially to gauge if MDGs are effective and are rooted in women’s needs. 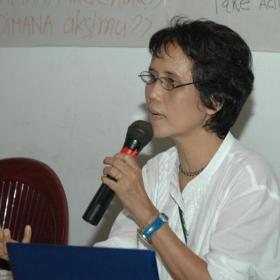 “The impact that we want to create is not only through the statements that we make in these fora, but also, and more important, how hard and solid we are on the ground and in the women’s movement to convince them,” concludes Dina.

Governments make decisions that leave women and marginalized peoples excluded. In the final tally, when governments fail the people, it is the people who suffer. It is only fair for women, along with other marginalized sectors of society, to claim spaces and platforms such as the Global CSO Forum to make their voices heard.