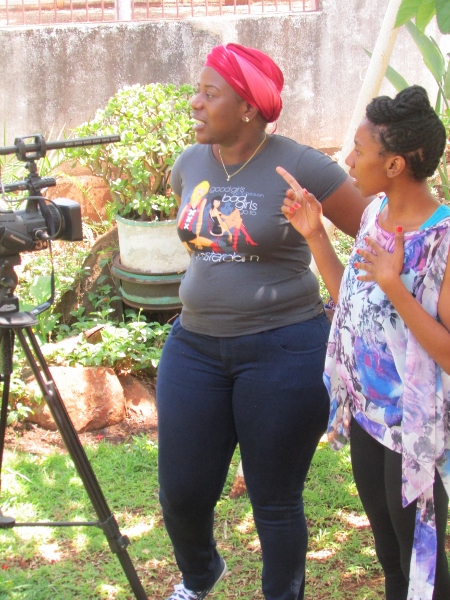 There’s an act of defiance in going onstage…

We are standing in the garden of Katswe Sistahood’s office in Harare. It is 29°C, the sun beats on our foreheads until we’re shiny with sweat and our clothes are soaked through. There is a group of young women performing a series of exercises. Breathing heavily as they jump in one spot, and then shift into seamless choreography, high kicks slice the air, swan-like arms raised to the sky, sturdy legs in squats that make them unmoveable as mountains no matter what comes at them. Then they are laughing, breaking into a chorus of ululating greetings, they weave amongst each other in predetermined order before they freeze, statue-like, and the first speaker begins her monologue, voice strident and her gaze laser-focused on some point we can’t see—but she makes us want to look, to look at her and with her.

The Vagina Warriors have been meeting for roughly four weeks. The nine young women who hail from low income housing settlements (high density suburbs) began their journey in the crucible Katswe calls “pachoto”—where women come together in their groups, sometimes ten and other times as many as sixty in a single space, to talk about life, share the issues that are troubling them, grapple with some of the painful and difficult things they are faced with on a daily basis. In these spaces, women also laugh, joke, and enjoy the simple pleasure of just being themselves.

Roughly a month ago, this particular group of Vagina Warriors began preparing for an adaptation of Eve Ensler’s The Vagina Monologues. Each warrior crafted monologues based on her own lived experiences, finding her own voice and narrative. It’s an intense process that involves not only theatrical training but also the telling of stories that are gradually whittled and sculpted into monologues, war cries, songs and dances—all of which the warriors will perform on Friday November 8th at the Harare’s biggest theatrical venue.

But this is not just about entertainment, it’s about something deeper.

“There’s an act of dfiance in going onstage,” says Rudo Chigudu, “Because everything about our stories is private…. When young women get married they’re told, ‘Don’t air your dirty laundry in public,’ [yet] the woman next door knows you’ve been beaten because you ran down the street half naked. But you’re still supposed to pretend that it’s [violence] this very private thing and you’re supposed to contain it. There’s something in saying, I’m sick and tired of pretending, that my life is private when there’s nothing private about it and the privacy is actually killing me. This private space is where I’m violated most and I can’t be silent about that anymore.”

Feminist politics tell us that the personal is political and that the divides between the private and the public realms of our lives are indistinct and, often, an outright fiction. We are told that sex and sexuality are private matters, the sort of thing to be discussed only between “husband” and “wife” behind the bolted doors of the bedroom. When we dare to bring dangerous issues—sex, sexuality, violence, women’s bodies—into the public realm, we face stigma, vilification, and even more violence. We are told how to have sex, and with whom, the when and the why are handed to us from rulebooks (literally and figuratively) someone else (a man or a god who is always a he) determined and wrote.

It’s here where the transgressive power of what the Vagina Warriors are doing sits. They don’t just whisper about taboo issues, the ones we’re not supposed to talk about at all—they scream, they shout, they blow the doors wide open. They sing, they laugh and they dance. What’s more, the vagina monologues developed from their own personal experiences and herstories are the nexus of a radical process of transformation and, to its fullest realisation, movement building.

“It’s not about entertainment or making sure people get the shock,” says Talent Jumo, “Sometimes we don’t celebrate the journey itself and what it does to people—to the women in our spaces.” This transformation can only be made visible by looking at the process of developing the vagina monologues, by examining the stories and the story behind the stories.”

We all spend a lot of time in women’s rights and development work talking about “change” and “measurable impact.” We clock hours and hours calculating the percentages and the neat little numbers of direct reach we’ve accomplished year in and year out as proof that our strategies and plans are working. But when we are talking about change—real change, the kind that sits at the heart of movement building, it starts here in the lives of women and in safe spaces where women can come together to reflect and reclaim their own stories and lives. 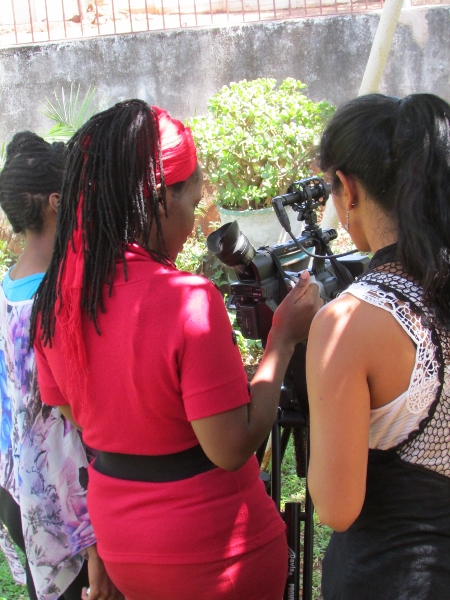 This process of transformation is not easy or straightforward. Its victories can’t be measured with a ruler (most of the time)—but they are real even as they can be intangible. It’s about power. The power within when a woman realises that she matters, that her voice matters and that she can speak out. The power to effect change, whether it is in her personal life, in the home, the workplace. The power with other women to carve a different vision for the world they inhabit and make it real together.This kind of transformation begins at the individual and reaches beyond into families, communities, societies, it lights a fire and sparks revolutionary change.

One last word from the Vagina Warriors:

You don’t realise it when things are changing but when you think back to when we started four weeks ago and now—it’s different women. You can see it even in the body language and how a warrior carries herself. The process itself is therapeutic, when they’re ready, they bring more and more of themselves. There was one vagina warrior who, when the process began, all she would say was, ‘I just need to find my father. Because there’s nobody else in my life. There’s this man who disappeared when my mother got pregnant. Then my mother died and then my siblings died. There are no relatives, I have nobody. I feel that if I find my father, maybe he has children and then at least I can have a family.’ But yesterday, a month after we began, she said: ‘If [my father] didn’t care enough to be there then why do I think that finding him is going to do anything? The people around me are my family now… so why do I keep searching for this shadow?’