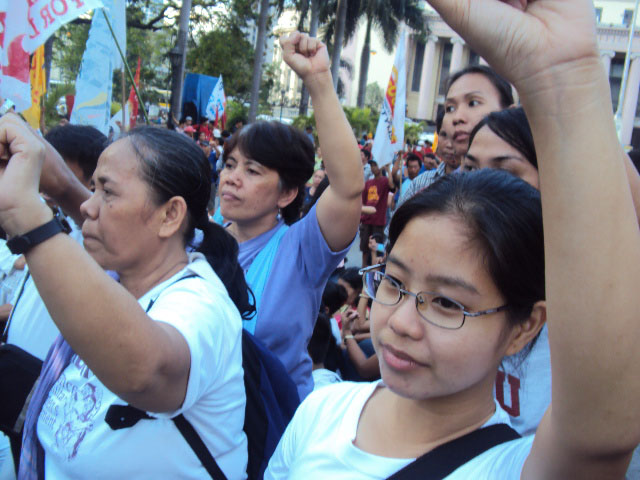 One of my friends posted a question in her Facebook account about why there should be an International Women’s Day (IWD).  For her, it is reflecting women’s dualism: women feel oppressed and at the same time asking for a special treatment. Of course, she’s not alone. Do we need to celebrate?  Sure!  Anytime!  But to pretend that this is some great feminist victory feels “fake,” as one woman wrote in the Guardian.

I, indirectly, answered my friend by posting the website article “We must not be Indifferent to Women’s Day” by Supriya Dwivedi, a Canadian who made good points on some of the women’s issues in Third World countries and her own.  I also posted a reminder and a pledge on my Facebook account: Please, don’t take your privilege as middle-class-educated woman for granted.  It took movements at varying degrees to come to what we have now.

I then feel obliged to write down my perspective on the International Women’s Day (IWD).

I began to become aware about IWD in 2004, when I was studying in the Women’s Studies department at the University of Indonesia.  Previously, I only know about Kartini’s Day and Mother’s Day, both celebrated locally in Indonesia.  Although there are many countries that celebrate Mother’s Day, the dates of celebration vary.  Meanwhile, IWD is commemorated at the same date internationally, March 8.

So, why should I care about IWD?  Should every feminist celebrate IWD?  To celebrate or not is a matter of choice, but to reflect on it is a must.  I care about IWD because it serves as a moment to raise awareness, to remind ourselves, to strategize and to embrace more people into the movement.  It is a moment to bring personal reflection into public domain; being a woman is not “born”; instead, it’s a process of “becoming.”  It’s a category on its own.

IWD is not merely a celebration of women’s achievements. It’s a moment we give to ourselves and others to reflect, to look back on the journey we have gone and have been going through as a group across the globe, to shape and claim our human rights.  By shaping, it means showing our differences, part of our humane characteristics that must be included into human rights perspective. For you can’t talk about human rights without addressing the different realities of humans: sexes (women and men), classes, ages, disabilities, races, ethnicities, sexual orientations, etc.

IWD is also a good moment for me, personally, to make the pledge I made on Facebook that any woman of privilege should not take her condition for granted. It is a moment to remind us that it took a long time and a lot of energy to organize ourselves at varying degrees to come to what we are today.  I have no problem if the poor couldn’t care less about the IWD.  They still have basic issues on their plates. But for us, it is a privilege to not be bothered with the basic needs. That privilege comes with responsibility.

Some Indonesian women like to point out that unlike the women in the US, Great Britain, or some Scandinavian countries who fought for a long time to get suffrage; women in Indonesia had been given the right to vote only since the Independence Day in 1945.  I’d like to say: Wake up girls! If it wasn’t for those Dutch or English women activists who struggled for suffrage in their countries, we, women in the colonized land, would have to do it for ourselves. So for the greater part, they had done it for us.

Of course, humans tend to forget.  It’s part of our nature. Therefore, we create this mechanism of celebration to refresh our memory and be reminded back to our vision.  In an age where women can be leaders, we are also encouraged to be consumers.  In an era where media industry broadcast news about violence against women, we are the victims.  IWD is a space where we can reflect those numbers as our own and where the violence experienced by the victims could be ours.

If someone greets you “Happy Women’s Day,” treat it as if he/she says: Congratulations, you have freedom of speech, freedom of association, right to vote, freedom from fear, right to choose whom to marry, right to own land,” and you can add your own achievements here. 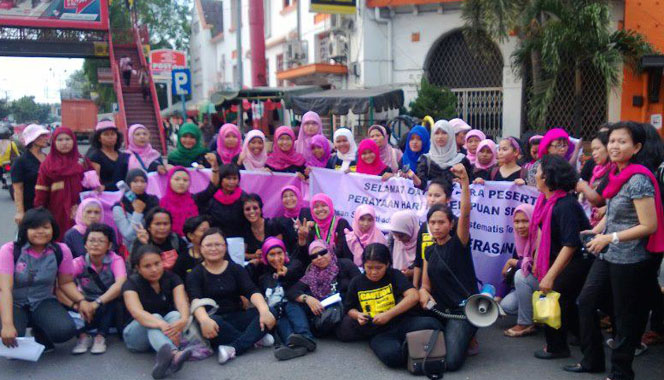 It’s a reminder that everyone has a different starting point to get the most of competition. Can you say that as an urban, middle-class-educated woman, you have the same starting point to compete in the job market as your domestic helper?  This is not to say that I never questioned my activism.  The questioning itself is part of my activism.

In the end, I want to make use of International Women’s Day to call attention on the ways women and feminist movements are transforming the world for everyone.  We are “born” human but in reality we are in the process of “becoming” human.

Niken Lestari is an urban, middle-class-educated woman.  She has experienced verbal violence has survived sexual harassment.

Niken is currently one of the regional coordinating group (RCG) representatives of Indonesia.  She is also the national coordinator of the newly-formed Forum Aktivis Perempuan Muda Indonesia (FAMM-Indonesia) or Indonesian Young Women Activist Forum, a women’s organization influenced and inspired by JASS.