Fungai Machirori, founder of Her Zimbabwe, sat down with fellow feminist journalist, Pat Made at the JASS Southern Africa Strategic Planning & Review to explore the ins and outs of communications for feminist movement building and the importance of getting people to talk differently so that they can think differently.

Fungai: I’m here with Patricia Made; we’ve been together at the JASS Southern Africa Regional Strategic Planning for the last three days. Pat, what are your general impressions about this process?

Pat: I think that it’s been more than a strategic planning process. In many ways, it became a space for us to really reflect and come to a critical analysis of the situation or context that we are working in. And I think that was really valuable for us. Often, with these kinds of strategic planning processes, you come up with your objectives, your activities and how you’re going to do it and what results you’re looking for.  [But this JASS meeting] forced us to look at the environment we work in first. We took a step back to unpack what we really mean by feminist organising, popular education methods and consciousness raising. [One thing that was] so valuable to understand is that it is actually knowledge and communications that sit at the centre of this work. And for JASS Southern Africa and the region in general, we need to position another discourse that uses feminist analysis to look at the interrelation between race, class and gender and how this impacts on the political, economic and social development of our countries. It was exciting. Taking the analysis forward and turning that into actions and activities gets us [and our organisations and movements] far beyond what we often do when we write out short-term plans and actions. I found deep meaning and value in the critical reflection, deep analysis and wonderful communication between women.

I think the language we use in women’s rights and feminist work has to be language that’s grounded in women’s experiences and that helps women, no matter where they’re situated in the countries where JASS works to say, ‘A-ha! I’ve had that experience.’

Fungai: What kind of language do you feel would span across different groups of women and their organising, to speak to a commonality of women’s issues and women’s rights, or that would make sense to a collective. 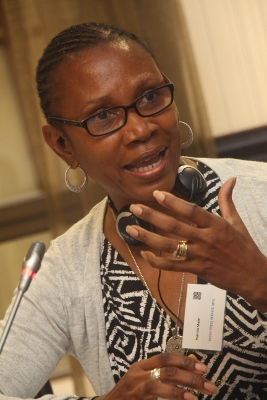 Pat: I think the language we use in women’s rights and feminist work has to be language that’s grounded in women’s experiences and that helps women, no matter where they’re situated in the countries where JASS works to say, ‘A-ha! I’ve had that experience.’ Or ‘That happened to me the other day.’ So in other words, women begin to connect the dots through their lived experiences. We need to be able to make spaces and initiate conversations to enable women to do that but it’s more than just conversations. Once women have connected dots, then we have to understand what those dots mean. In terms of communications, it’s about creating room for continuous dialogue and helping women to understand how to analyse what they’re experiencing using a feminist analysis. It’s this critical analysis that will get us to the heart of the issues we need to organise around.

Fungai: Do you feel that in order to organise women need to embrace the ‘feminist’ identity? Do they need to claim or name themselves as feminists to be part of the process? As we know, there is a lot of resistance to claiming feminism in different parts of the southern African region [and around the world] and this is part of the dilemma we face as feminist activists.

Pat: The issue of how you identify yourself has a lot to do with location. And often we shift our identities depending on where we’re located. So it’s not always as simple as saying, ‘I name myself as this.’ I often believe, it’s hard to name yourself without understanding the values and what they mean for how you act, how you treat people in your everyday interactions. So it’s not just about naming but about living it. And to get to that point it takes a long time and a lot of constant self-reflection. So I don’t really believe you have to name and identify right away, you have to go through a process of constantly self-assessing, re-learning and shifting values, and beginning to live it in order to name it. So in these discussions—such as the ones that JASS has in communities in Malawi or Zimbabwe—we are providing a framework of analysis and it does not have to be called ‘feminism’ from the get-go. It’s a way of working with people to find a different way of looking at issues, looking at their experiences. These conversations help people to understand the lens we are using. And because it’s about looking at women’s rights and gender equality and gender justice within that, it’s not justice for just one group of marginalised women—it’s all marginalised women and men. So it becomes a collective agenda to bring about a just society.

Fungai: In closing, communication is your area of expertise—do you sometimes find that communication is given a back bench role and treated as an afterthought in women’s movement building and rights work?  What is your hope for the communications role in terms of creating prominence and relevance to the work that the organisation will be doing?

Pat: I think within our small [focus] group on communications, we began to understand our starting point. When you get people to talk differently, you can get them to think differently. And communications is central to that. If we want to change the frame and the thinking, we have to really use communications to change how people speak about what’s happening to them. And I don’t see any other way of doing it. The moment you open your mouth to do anything or take a flip chart to do anything, you’re already in the process of communications. So now you have to understand what am I doing with this communication? What am I doing when I teach? What am I doing when I sit down and dialogue? So whether we realise it or not, it is central to organising. And we have to step back and give more thought to its centrality in the work.