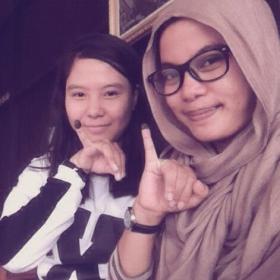 I barely slept on the days following the elections. We in Forum Aktivis Perempuan Muda – Indonesia (FAMM-Indonesia) took part in various work related to the legislative elections of 9 April 2014 mainly to call for greater participation of grassroots women in the electoral processes. FAMM-Indonesia, a JASS-inspired women’s organization, works with 160 young women grassroots activists in 30 provinces of Indonesia. In the recent legislative elections, FAMM-Indonesia women served as women educators of voters’ rights, election observers, election committee members, and some were even candidates in the local levels.

We are pleased that the elections happened in peace and that there was no recorded cases of violence before, during, and after elections.

Maria Mustika, FAMM-Indonesia’s knowledge coordinator, was part of Polling Station Working Committee (KPPS) in Surabaya. The KPPS is under the KPU or Indonesian Election Commission, an independent or non-structural body, much like the Corruption Eradication Commission. It was set up by the central government but it works independently. KPPS team implemented the election process and took care of logistics in the polls of their domicile. Their responsibilities include preparing for the voting and the actual counting at polling stations; accepting witness team from each candidate pairs; administering the voting and counting at the polling stations; and delivering news and voting certificates to the polling committee or the PPS.

Erma Woelandari, also a member of FAMM-Indonesia, took part in the election committee as observer. Erma conducted voter’s education trainings and organized young people as election observers in Samarinda area, East Kalimantan. Like Maria and I, she also stayed till late at night – until  2 AM – to ensure that votes are properly counted. FAMM-Indonesia members Herlia Santi and Hasmidha Karim likewise took the role of election committee and observers in their area of Riau province and Kendari, Southeast Sulawesi.

In FAMM-Indonesia, we asked our members to be smart voters and to carefully check the background and platform of political parties and their candidates before they vote for them.

Through these initiatives, the women of FAMM-Indonesia are further strengthening young women’s political awareness and leadership and they are also effectively taking part in political spaces.

In a country where women still struggle to make way into the political parties, election system, and the legislative system, women’s organizing on the ground is all the more significant. Currently, women’s participation as candidates in the legislative elections  are seen only to fulfill the 30% quota for women’s representation; they were placed at lower numbers as candidates in their party. Governments, the Indonesian government included, turned to quotas to expand women’s political participation and representation. As we say in JASS, though important, more women in legislatures doesn’t necessarily translate into improvements in women’s rights and livelihoods, particularly those of marginalized women.

If the token representation of women through the “30% quota” is any indication – Indonesian women are out for a long shot. Ultimately, it is FAMM women’s organizing on the ground that bears much promise. FAMM-Indonesia is out to build more a dynamic movement for greater influence and social change. Even if it takes a thousand sleepless nights.