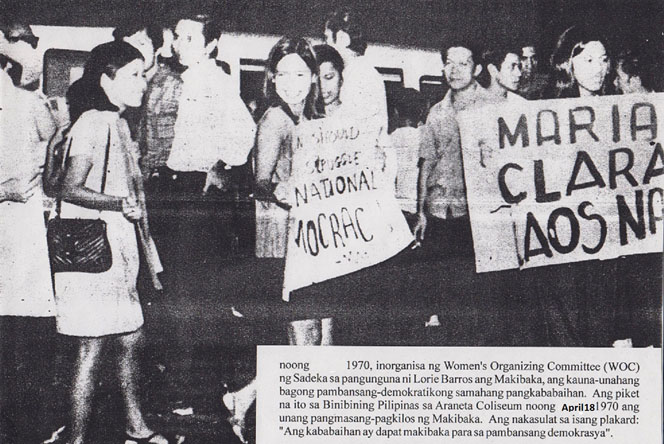 The Philippines has a strong nationalist movement and I grew up in this context.  Movements and movement building are not novel concepts for me.  The Filipino counterpart of movement is kilusan; I learned this word at about the same time I learned how to count and to read.  I was born and raised near Mendiola, a stone’s throw away from Malacañang Palace (the Philippine president’s office) and the battleground of bloody demonstrations and protest actions of the martial law era during the rule of Ferdinand Marcos, known locally (and internationally) as the Philippines’ first dictator.

That was why the opportunity to be part of the CREA Feminist Leadership, Movement Building, and Rights Institute-South Asia gave me both a sense of excitement and doubt.  Yes, South Asia has a long history of struggles; it has a rich feminist history.  It is currently a mix of movements.  But there is that pride over the same richness of struggle that the Philippines is known for, so I ask myself, “will I learn anything ground-breaking?”

My excitement was well-founded.  I can name a whole range of things that the Institute made me realize: I learned about processes and contexts apart from my own country, apart from my own region; I saw movements from bigger perspectives.  I met women whose lives and work revolved around making women’s lives better.  I met women who risk their lives and limbs so that women would live in a more just society.  I learned about long-standing and emerging movements.  From the resistance and struggle by Adivasi (indigenous minority) women in Odisha, India to the women’s Jamaat in Southern India to the women’s movement of Sri Lanka to the Occupy Baluwatar (anti-violence against women) movement in Kathmandu, Nepal.  South Asia is a storm center!  The CREA space gave me a better grasp of movement-building through the presentation of these diverse movements in different parts of South Asia.  The atmosphere at the Institute was much like in JASS!

While movements make heroines of all of us women, we do not need monuments to keep going. That movement building is a painstaking process is a fact.  And so is sustaining movements.  Feminist movements all over the world are a testament to this reality.

But feminism has indeed evolved over the years.  In the past, differences were highlighted instead of the similarities.  Now, attempts to create spaces where women unite despite diversity happen, just like in the JASS processes.

Learnings notwithstanding, I would still like to see the day when clear explanations of where feminism has gone wrong and what lessons we learn from these mistakes are tackled in feminist spaces.  It is definitely a positive experience how moving forward is always on the agenda.  But I think, in the long run, until a movement learns how to self-criticize, it will not advance to its fullest potential.  And the feminist movement is not exempted.