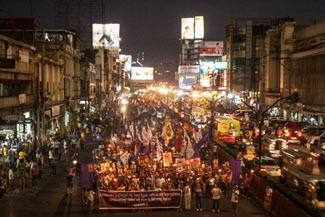 “I’m willing to join more protest actions and even be detained every week just to get women’s and the people’s message across,” says Abigail Extremadura, a Filipino woman activist who was arrested in a demonstration on the eve of this year’s International Women’s Day (IWD) commemoration.

Upon the vigilance of fellow women activists from GABRIELA, Abigail was released the following day. Undaunted, she once again partook in the IWD protest marches; this time, with more intense commitment.

Abigail is just one of the tens of thousands of Southeast Asian women who joined the IWD activities on the 8th of March 2013 and, despite state repression, made the most of the event to make women’s demands visible and heard.

In the Philippines, the IWD commemoration was the call for the “Stop the Rape of our Motherland”, a protest against the attack on women’s economic and political rights and welfare, or against the overall poverty and violence that Filipino women are experiencing. Thousands of women joined the coordinated activities in key cities across the country, led by GABRIELA, a national alliance of women’s organizations and one of JASS’ partners in SEA. In Manila, a vigil for the release of Abigail kicked off the day’s activities. This was followed by a morning protest march to the US Embassy where the women protesters clashed with the police when the latter fanatically guarded the embassy. In the afternoon, the Center for Women’s Resources (CWR) initiated discussion groups on current women’s situation. The culminating activity in the evening was the women’s march to Mendiola, near Malacañang Palace, the Philippine president’s official residence. 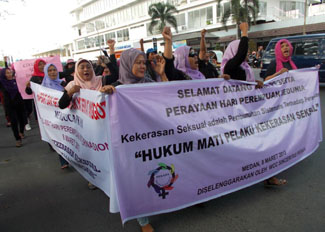 In Indonesia, the newly-established Forum Aktivis Perempuan Muda Indonesia (FAMM) or Indonesian Young Women Activist Forum, composed of JASS Indonesia’s alumnae, spearheaded the synchronized activities in eight provinces which mobilized a thousand young people, majority of whom are women. “Resisting Violence against Women” is the overarching theme of Indonesia’s IWD and this was embodied through a dialogue in Malang-East Java and a mobilization in Medan, to name a few of the activities. With the observable increasing apathy of young people towards political and social activism, FAMM-Indonesia sought to maximize events such as the IWD which served as a strategic platform for FAMM members to reach out to more people and to involve more diverse group of marginalized sectors such as the LGBTs and sex workers.

Global events such as the IWD commemoration are instrumental in organizing our own ranks, our friends, and our networks that work in various issues.  This is a time for us to unite in collective action,” says Niken Lestari, FAMM-Indonesia’s National Coordinator. 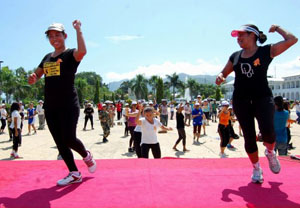 In Timor L’este, JASS partner organizations REDE FETO and the Movementu feto foin Sae (MOFE-TL) or Young Women’s Movement-Timor L’este, together with other women NGOs, organized almost 500 mostly women professionals and students as well as members of government, police and military and media to a mass gathering that culminated in a coordinated dance performance. Under the theme “Timor L’este Rise Up in Action to End Violence against Women,” the event aimed to bring to the forefront Timor L’este’s growing awareness on the need to end violence against women.  The public event was a call to “dansa ho haklahak: hapara violensia kontra feto” – which takes off from the One Billion Rising initiative last 14 February 2013. The Timorese’s love for dance and music that is well-entrenched into its culture played a big role in the success of the activity. 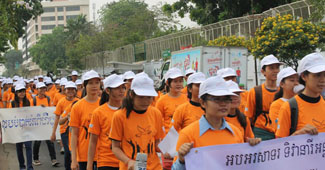 In Cambodia, members of the Cambodian Young Women’s Empowerment Network (CYWEN), along with the CYWEN network, SILAKA and the Cambodian Young Women Activist in ASEAN (CYWA), led more than 200 young people, most of whom are women high school and university students, in a morning march in the streets of Phnom Penh. Under the theme “Women Crossing the Bridge to End Violence against Women,” the event was capped by a dance-exercise choreographed by CYWEN members.

All of us worked with our hearts to make this event possible. The deep sense of commitment, volunteerism, and solidarity among each other prove that CYWEN, despite being an organization that is still in its pioneering stage, is dedicated to mobilizing more young women to participate in our group and this is the way that we can strengthen our voice and leadership,” says Sophoan Chan, CYWEN’s Chair. 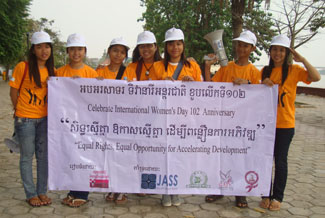 The IWD commemoration came from radical beginnings. It was proposed by German socialist Clara Zetkin 102 years ago to recognize the common struggles of working women, to build international solidarity among them, and to form alliances to oppose war. “JASS Southeast Asian women are reviving the spirit of solidarity and militant tradition of the International Women’s Day through the various creative and coordinated actions that we did. Significantly, JASS-inspired young women’s organizations such as FAMM-Indonesia, MOFE-TL and CYWEN took the lead in these actions,” says Kunthea Chan, JASS SEA Program Coordinator, who herself joined the young Cambodian women’s mobilization in Phnom Penh.

From protests to parades, to cultural performances and dance-exercises, and to dialogues and discussion groups, JASS women in Southeast Asia are proving that their strength lie in collective organizing power to effect changes. Undeniably, in Southeast Asia, JASS women marked International Women’s Day with a bang.