It’s hot. 36 degrees. We are not sure the march is going to happen. How can women take to the streets with the sun burning down on their heads? As we arrive at Kamazu Statue, there are not many women present. There is no shade left, so we sit in the bus. We are really not sure if it’s going to happen. Sibongile from M+ gets out and for the next half hour there is lots of talking, walking back and forth, negotiation and gesticulation. At some point she disappears, when she returns she tells us she was asked to address the gathering crowd. Not for the first time we are made aware of the respect she garners and her ability to mobilise. We are joining forces with delegates from the Global Race to SAVE Lives Conference “Lilongwe march to S.A.V.E. children and their mothers from HIV infections, stigma and preventable deaths” and to add our messages from the dialogue that demand the necessary resources and support from the ministry of health, medical institutions, local financial lending institutions and government to save lives now. 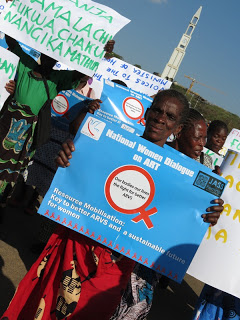 But something is amiss, it’s 2pm and there are only a few women sitting in the shade, some uniformed school children and one bus with women wearing the infamous blue chitenge that has now become so well-known through all the press coverage of the Women’s National Dialogue on ART. We sit in the bus, unsure of what is going on. It is hot. It is too hot to march. We are not sure.

Then we are marching. We pour out of our bus to join the now 200-strong crowd. The blue chitenge of our constituency is conspicuous. We take all the posters women painted the previous evening in blue, green and yellow paint. Messages carrying women’s voices and demands. Everyone wants a poster and soon we have no posters left. In a split second we suddenly realize that the whole march carries our messages: Fight for Better ARVs, We Demand Better ARVs to Enjoy Right to Live and Good Health, Stavudine Asowe, Komanso Zipatala Pafupi, We Demand More Resource Allocation for Ministry of Health, ARVs Without Food is Death, If You Want Women’s Votes in 2014 Put 75 Billion on the Table for ARVs!

The JASS banner with the slogan ‘Caution: women crossing the line’ is held first by Ruth, one of the JASS SNA movement builders but is quickly taken by others, who claim the message as their own. 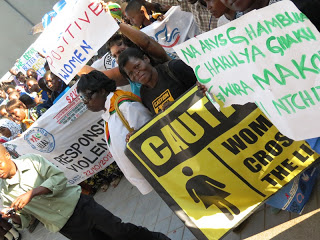 The entire march making its way to parliament carries feminist slogans on Our bodies, Our lives: the fight for better ARVs. Through a combination of both good and bad planning our messaging is carried loud and clear, by men, women, faith based leaders, children … the blue sparkles, its great! We march, the tar on the road burns underfoot, the loud speakers blare. When we arrive at Parliament, gates, security forces try and keep us to one side of the entrance, but women keep spilling on to the road. The women activist leaders we have come with push their way to the front, making sure their posters are seen. After a while, we are allowed entrance and the march continues up the winding road to the Parliament buildings where we are met by the Speaker of Parliament and various other dignitaries. The position paper developed by Pan African Positive Women’s coalition, Malawi Interfaith AIDS Association and the Coalition of Women living with HIV (COWLHA) (part of the JASS network) and backed up by the press release drafted by Manerela+ and JASS is presented and accepted. Suddenly everyone is moving again, it’s like we are storming Parliament as everyone rushes in to take a look at the place where decisions are made about our lives.

Victory is ours … at least in this small battle! 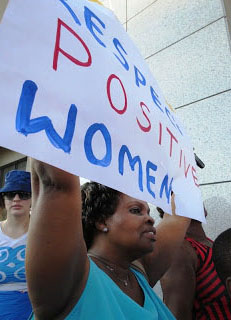