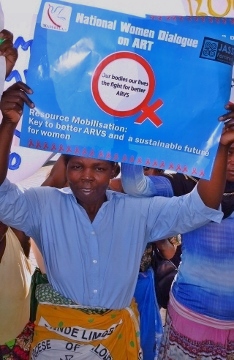 It is hard to conceive the magnitude of what Malawian women activist leaders with whom JASS works and the hundreds of women they represent in their communities have accomplished through their organising and the Our Bodies, Our Lives Campaign for Better ARVs.

The numbers are certainly there with over 6000 people directly reached by the campaign; awareness-raising radio programmes and talk shows that reach approximately 75% of Malawi’s 16 million population; women activists in 22 districts of the country advocating not just for access to treatment but also for targeted healthcare that responds to women’s needs without discrimination. That’s not all, women activists are also standing up in their communities to access the kinds of resources they need for survival in a context that is increasingly difficult for women economically, and challenging their local leadership and chiefs to make provision for women’s livelihoods so that they can lead fulfilled lives.

But these numbers and achievements only tell a fraction of the story. What of the personal, what of the individual women and collectives and their experiences and stories of transformation? Of women like Judith, a woman activist leader from northern Malawi, who proudly declared at a recent campaign meeting:

“I know now that I must not remain in the master’s house [code for patriarchal society that oppresses women; based on Audre Lorde’s The Master’s Tools Will Never Dismantle the Master’s House] and I know how to move out from it. In my community I have helped many people who have been violated. They don’t go to the village head, they come to my house because [they know I will fight for them]. That’s why I call myself ‘the local lawyer’.”

Or Tiwonge, who stood up to the chief of her district when he refused to give HIV positive women access to vital seeds and fertilisers:

“The rage I felt in my heart, the anger at being belittled catalysed my courage, consciousness, and integrity to the fullest; this made me rise in rebellion against what obeying the chief, it prompted me to reject all the rewards for such obedience.  Having seen that my position was not shifting, he agreed to declare his status openly. He apologised to the community and today he talks and behaves like an HIV activist.” 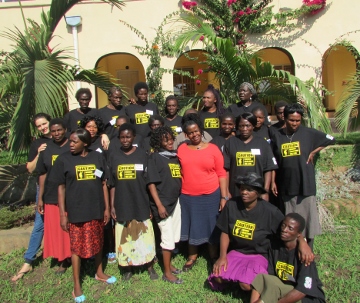 We asked Everjoice Win, JASS Southern Africa (JASS SNA) advisor, to reflect on the parts of the story which she’s experienced as someone who took part in the initial conversations  about JASS’ HIV agenda in the southern African region way back in 2005-2007 and who is now involved again, working alongside women activists through JASS SNA’s feminist movement builders’ schools. In Malawi, JASS has hosted three regional feminist movement builders’ schools with over 60 women from across the country, as popular education spaces that grapple with critical issues such as power, feminism, feminist movement building, sex, sexuality and HIV treatment literacy for activists.

Maggie Mapondera: Given your experience with JASS’ work in Malawi, from the beginning to the schools you have co-facilitated (the latest regional school took place in Blantyre, Malawi in August 2014), what are your thoughts?  What has struck you?

Everjoice Win: As you know, I was involved in the beginnings of this conversation going back to 2005, when at the time (and not just in Malawi but in the region as well), there was a concern that although the world had woken up to “discover” women living with HIV and that these very women were on the frontline of the struggle given they were the most affected on multiple axes—when it came to money and programming, there was very little happening. At the time, JASS was not the only organisation grappling with how to work with positive women and indeed with women on all sorts of issues.

For me coming from that time [at the nascent stages], seeing now all the women organising, women standing up as a collective, individual women whom I’d met in 2007 who’ve come so far in their journeys. And when you say that, a donor or other development people immediately want to ask, “Give us some ideas? Give us indicators? What has changed?” And that is always so difficult to describe because you have to have been there, then and now, and you have to have seen this woman, how she was speaking then and how she’s speaking now, what she’s speaking now compared to what she was speaking about then and to whom she was speaking.

And for me that’s been phenomenal.

We can talk about an individual woman, Judith or Tiwonge or Linnah but it goes beyond them, they serve as a proxy. And, it’s not that she was downtrodden, face-down, poor—or whatever other words people like to use—at the time. Even at the time, she was a leader in her community and already working with women, already identifying critical issues in her community. Economically, you could see signs that she and many of the women were struggling, they would talk livelihoods, the money they didn’t have, their farming activities and how they were struggling to sustain those because they couldn’t get the inputs they needed. But these weren’t front and centre of the conversation.

There’s a difference there.

Someone like Judith or Tiwonge understands where decisions are made, how they’re made and who makes them. She is doing an analysis of her context, she is examining what has changed in her district now that alternative ARVs have been made available for all Malawians, she is assessing whether the Ministry of Health is delivering on its commitment to ensure access to ARVs in health clinics at the community level.

It is women talking about the action they took, or thinking about strategies to take action together.

For me just that experience has been empowering—to see women making demands of the institutions that have power over them.

That said, although I’m talking about how far women have come, at the same time, I am struck by just how much we still have to do and the mountains women have to climb. Here we are in 2014, in the age of Twitter, Facebook and Africa Rising and all of that, and there is a woman who has nine children who doesn’t know how her body works. And if she does, there are very few places where it’s okay to talk about her body—to talk about pleasure and pain, sex and sexuality.

And that makes me ask: what exactly are development practitioners doing? How are certain approaches short-changing women by telling them only half the story—maybe not even half?

But you can see in the feminist movement builders’ schools how women take to concepts, how they use them to analyse their own lived realities, identify how power (invisible and hidden as well as the usual suspects like the government or the police) is the crux of the matter. Because we all know that the government can provide ARVs and have them be available, the truth is that unless women are in a place to take those ARVs, make use of them [without discrimination], then it isn’t going to work. The schools are three days’ long, which means they are just the beginning of a conversation—an important beginning.