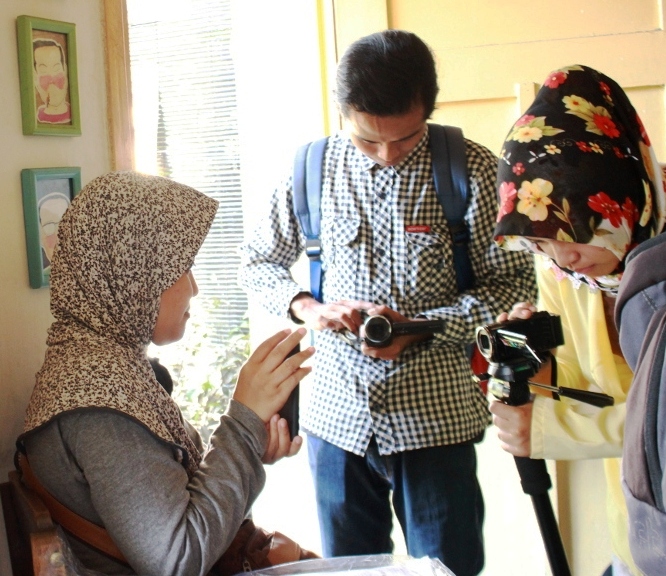 “Your event is against Islam and Indonesia’s constitution. We demand that you cancel the event, if not, we will.” – Anonymous SMS Sender

For the International Day Against Homophobia, Transphobia and Biphobia (IDAHOT) celebration on the 17th of May 2015, we in Forum Aktivis Perempuan Muda (FAMM-Indonesia or Young Indonesian Women Activists’ Forum), along with Kojigema Institute were planning to hold a talk show which would highlight our experience with sexual diversity and to get to know transgender lives and achievements. A beautiful and proud transgender woman agreed to come as our speaker and vowed to invite some of her friends too. I was very thrilled. We in FAMM-Indonesia and Kojigema were all excited.

But two days before the IDAHOT celebration, a man called my friend from Kojigema who is also one of the co-organizers to “investigate” the event that we were planning to conduct. We sensed that something was not right about this man calling us but we didn’t pursue it.

I was the main contact person for the IDAHOT event and this fact was stated in the media advisory and press statements we sent out days ahead. The night before the activity, I received four calls from four different men who were “investigating” but were actually using threats, pressure, and intimidation to force us to cancel our activity.

The news spread as we used social media to promote our activity. We have been using social media to publicize our events in the past. But this time, our event got unusual attention. In our social media accounts, some friends, including our resource person, a transgender woman, also faced prying questions and disparaging comments. We had never experienced this before. FAMM-Indonesia and Kojigema Institute are relatively small organizations in terms of membership and popularity.

We continued to receive repeated threats and harassment from unknown hate groups a few days before the event, which led us to cancel our activity with the theme “Celebrate Our Gender”.

Being LGBTQI in Indonesia

Being LGBTQI (lesbian, gay, bisexual, trans, queer, intersex) person especially if you openly admit it, can be difficult in many places in Indonesia. This includes Malang City. Indonesia is a country with the biggest Muslim population in the world. Out of its 253 million people, around 87.2% are Muslims. But it also has 342 discriminative policies towards women and minority groups in the name of Sharia law.

For our IDAHOT celebration in Malang this year, we particularly used the title “Celebrate Our Gender” rather than “Celebrate Our Sexuality” as a strategy and as a step for participants to learn about sexuality without directly saying it. The idea was to invite a transgender woman in a discussion with heterosexual men who believe that “God made only two sexes”. So we thought, we could start from there. Kojigema Institute, an organization composed of people of diverse gender identities has elaborating sexual, reproductive, gender, and sexuality education as well as developing the knowledge and practice of equality and empowerment as two of its missions. And this IDAHOT activity, beyond celebrating, sought to build critical awareness by organizing a discussion on gender and sexuality.

Some people thought that we were throwing a sex ritual party. Some people said we were gathering homosexuals. The theme “Celebrate Our Gender” rang a different meaning to their ears. The phrase “International Day Against Homophobia, Transphobia and Biphobia” was threatening their values. For these people, humane values and basic human rights, it seems, are not applicable to my friends because of their sexual orientation.

However, this is not new to us. Like everyone else, previously, I was unable to understand a person who claimed to be gay or a lesbian Muslim. I used to wonder how people of the same sex can fall in love with each other. Then I also used to think that I was a lesbian. The questioning process resulted in a richer perspective and better self-appreciation of my body and sense of power. I found and celebrated my heterosexuality rather than accept it as given.

For some of my friends in Kojigema Institute, discrimination because of their sexuality is not new. The discrimination comes from many sides, including their family. One of my lesbian friends had her allowance cut by her parents because she removed her hijab (head covering) and exuded a “masculine” behavior . Another gay friend lost the financial support of his mother after she found out that he’s gay. He then dropped out of college. He now does odd jobs to support himself. A transgender male friend was partially accepted by his family but has enormous burden to medically prove that he is biologically male – which will be very difficult. Indeed, it is hard under these conditions to come out as LGBTQI.

The intimidation we received prior to IDAHOT celebration made their situation more difficult. When we reported it to the police, they looked suspiciously helpless and asked us “politely” to cancel the event for the sake of “security and order of community”. In cases like this, it is alleged thatthe police usually takes the side of those who have bigger number of supporters and/or able to provide “security money”.

Fear is not new to us. We compromise it or diminish it. Sometimes we brush it aside as something that is “no big deal” but it is obviously disturbing and disrupting our lives. A lesbian friend  wears a hijab even if she doesn’t want to when she goes to see her girlfriend. A closeted gay man in Kojigema refused to be filmed on camera while talking about LGBTQI issues. He was willing to be a speaker only in radio talk shows. There is an assumption that if you are working for LGBTQI issues then you are also LGBTQI. In other words, you are openly declaring yourself as “out” of the closet. These are some of the situations that force them to “adjust” their “gender behaviors” in public to match the cultural and social norms

So it was with a sad heart that we decided to cancel the event – after a thorough evaluation of our preparations and consideration of the safety of our speakers and participants. It was disheartening because our IDAHOT celebration was cancelled because of “homophobic and transphobic forces”. But we learned a lot about our context and the power relations operating in Indonesian society.

We learned that we need to use social media carefully – to identify and have better communication with our allies, to involve and create good relationship with journalists, and the last one, to fight the fear within. Being an LGBTQI is not something to be ashamed of.

In a way, we were able to highlight our case to the media by the press conference that we held the day after the IDAHOT. Dozens of journalists from around 10 media outlets in the country attended the media event held at the Legipait Cafe Malang. We also released a joint press statement of FAMM-Indonesia, Kojigema Institute and KontraS Surabaya. Through these small gestures, we want to fight homophobia and transphobia. We do not want it to become our “powerless” moment. As one of my LGBTQI friends says, “there will be ordinary people who will finally hear about sexuality and maybe feel curious to learn”.

We learned that we shall not be overcome by fear anymore. We will let them hear our voice one way or another.

Niken Lestari, actively involved in JASS, is FAMM-Indonesia’s national coordinator and one of the founders of Kojigema Institute.