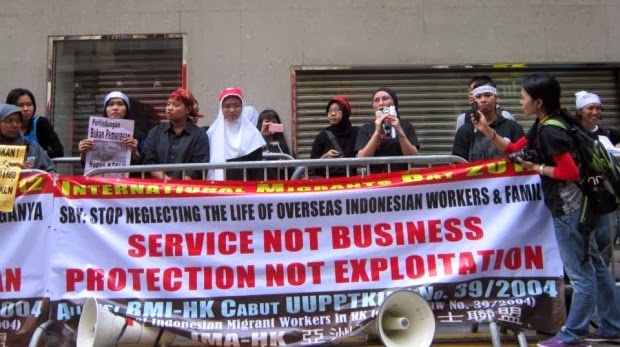 Two Indonesian women on death row in Saudi Arabia, 47-year-old Siti Binti Zaenab and 37-year-old Karni Medi Tarsim were executed recently. In November 1999, Siti Zaenab admitted to stabbing her female employer 18 times because of alleged “mistreatment”. Before her arrest, she sent two letters in which she said that her employer and her employer’s son had been mistreating her. Siti Zaenab reportedly made this “confession” during police interrogation where she had no legal representation at any stage and did not have access to a consular representative during the police interrogation. Both Siti and Karni were suspected of suffering from mental illness.

An Indonesian migrant worker, Tuti Tursilawati, the breadwinner of her family, also went to work in Saudi Arabia with her mother. She was convicted and sentenced to qishas (beheading) but her case was reopened. In her plea, she said that she was defending herself from her employer who was sexually abusing her. When Tuti fled from her employer’s home and went hitchhiking, she was brutally raped by nine Saudi men. The rapists were given a light sentence by the court.

Their stories are repeated tales of migrant workers who are mistreated while working abroad and received minimal or worse, no protection and defense from the Indonesian government. The government often responded a little too late to address these cases.

Since a few years ago, dozens of migrant workers were given death sentences without being served notice. Take Satinah‘s case where she was sentenced to death. Or Nasiroh who was raped by her employers in Saudi Arabia but her trial was so hasty that she did not know she had been convicted and she had no idea for what “crime” she was imprisoned for five years. Women lack the legal and psychological support while working abroad. They have to work long hours in poor conditions. They are also denied many basic workers’ rights. For the same reasons, women fall prey to and become easy targets of drug cartels to serve as drug mules.

These migrant women mostly come from poor families in rural areas and are breadwinners of their extended families. Many of them rely on debts to survive. With limited education and skills, working abroad is a desperate option knowing that they have little or no legal protection.

In line with our vision of building women’s collective power for justice, we in Forum Aktivis Perempuan Muda (FAMM-Indonesia or Young Indonesian Women Activists’ Forum) seek to address a few arguments in support of the #SayNoToDeathPenalty campaign opposing capital punishment in Indonesia.

Up to 2006, there were 11 regulations that mention the death penalty, such as the Criminal Code, the Act on Narcotic Drugs, the Anti-Corruption Act, the Act of Terrorism, and the Law of the Court of Human Rights. This list continues to grow with the impending passage of the Intelligence Bill and the Bill of State Secrets which also pose as threats to activists especially those who work in agrarian or land ownership and ethnic minorities.

There are many cases where similar crimes have gotten different indictments and court rulings, not to mention different media attention as well. The difference is often the result of the defendant’s access to good quality legal counsel at the cost of a huge amount of money and support from powerful political and/or religious figures in society.

Recently, an employee of Cipinang State Prison was fired for being an accomplice of Freddy Budiman, a drug kingpin. In December 2014, the Law and Human Rights Ministry acknowledged that there have been six drug dealers who control the circulation of drugs through prisons, one of them in Nusakambangan, Central Java, a renowned prison for high degree crimes. Yet, these people can “buy” justice which shows the discrimination in the application of the death penalty.

We are devastated to see our government, as the sending country, being less capable to fight and protect citizen’s rights. Our government has signed the Universal Declaration of Human Rights which states that, “Everyone is entitled to all the rights and freedoms set forth in this Declaration, without distinction of any kind, such as race, color, sex, language, religion, political or other opinion, national or social origin, property, birth or other status.” In Article 4, it says, “No one shall be held in slavery or servitude; slavery and the slave trade shall be prohibited in all their forms”.

#SayNoToDeathPenalty is one of the recurring issues that we in FAMM-Indonesia are advocating in our grassroots organizing of women and youth in communities. We likewise demand that the governments of ASEAN countries review their imposition of death penalty by considering and appreciating the lives of victims, the defendants, their families, and the human rights conventions.